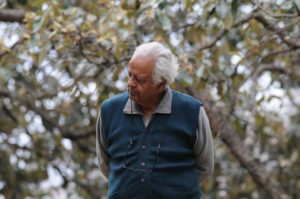 Explorer Mandip Singh Soin remembers Hari Dang - a passionate mountaineer, environmentalist and an award-winning educationist, who inspired many to follow their dreams.

Hari Dang, a brilliant mountaineer, educator, and wildlife conservationist, passed away on the afternoon of 23rd July 2016 in his residence in New Delhi. He was 81.

Hari Dang was awarded a Padma Shri, India’s fourth highest civilian award in 1976 for youth services. A charismatic educationist, he was the head and rector of schools including St. Paul’s in Darjeeling, as well as the Army and Air Force schools. He introduced the Duke of Edinburgh’s Award Scheme to India, which now runs as the Indian Youth Award Scheme. His passion for the mountains led him to be a mentor and inspire many others who followed in his path. A wildlife enthusiast, for 15 years, he was a member of the Indian Board for Wildlife.

Mountaineer and explorer Mandip Singh Soin writes about his relationship with his longstanding mentor who seeded in him the passion for mountains and adventure.

I met him as a student at The Air Force School in Delhi, where he was principal. The school assembly always had western classical music playing in the background of his booming voice. That same booming voice would often correct our English.

Analogous with the great wisdom he shared with the world, it’s only fitting that we be of positive mind and spirit and celebrate his life – celebrating that he lived on his own terms and displayed a kickass attitude, even to the cancer he was fighting in the end.

We are not talking about a great educationist, but a legendary one. The man, the myth, the legend – one who would open so many windows of the mind, sometimes all at once!

From names of birds, flowers and trees to mountains and mountaineering; from conservation and sustainability; to good old Geography that he loved to teach.

Doon School Anecdote
Legend has it that during a lecture at the Doon School, he asked a student where north and south was. When the student responded by pointing to the ceiling and floor, he promptly yanked him up by the ankles, held him upside down and repeated the question by asking, “NOW where is North and South, son?”

As a mountaineer, he was part of one of the first Indian Everest expeditions. He ingrained in me as with many others the love for mountains and nature, climbing and adventure.

During their summit attempt in 1962, he spent three nights at 27,650 ft. Two of those nights were spent without oxygen, with Capt MS Kohli and Sonam Gyatso. In 1962, it was a world record of sorts.

Having started regular expeditions at the Doon School, for the schoolboys it was logical he became the promoter of the Duke of Edinburgh’s Award Scheme in India and launched expeditions regularly to Black Peak (6387m) in the Garhwal Himalaya and other peaks like Jaonli (6632m).

In 1961, he accompanied a team attempting Nanda Devi. For him, it was a preparatory climb for Everest. They did not manage to summit, but the entire expedition worked on a budget of INR 20,000.

In 1973, he came up with the idea of getting school children to participate in the Himalayan expedition to Black Peak in Garhwal. He roped in other giants in education and outdoors like Shomie Ranjan Das and JTM Gibson for help.

About ten of the most prestigious public schools of India came together and launched this experiment of which I was a part, and even though I just missed the summit by a couple of thousand feet, Mr Dang had planted the seed of mountaineering and the spirit of enterprise in me. There was no looking back.

During the expedition, he was extremely energetic and took some of us over a high pass despite having lost his toes to frostbite on Everest. All this for a sighting of  the rare Primula Moorcroftana, as he was not satisfied with the Primula Denticulated we had already seen.

Air Force School Anecdote
Once he accosted a student in a wet t-shirt after a hockey game, and the student blurted “Sweating after hockey Sir!” Mr Dang roared at him and said “Animals sweat and you sir, as a human being – are perspiring!”

In fact, there was a delightfully wily part of him – he tempted us to go on a trek during the mid term-tests and many signed up thinking they would be able to dodge the tests. What no one knew was that he had rescheduled them and we had to take the exams anyway!

He also had amusing eccentricities – would always dress in white in summer and green in winter. His name Hari translates ‘green’ in English. He refused to sign in any colour of ink but green! Add to that he had an outlandish long signature, travelling all the way to Timbuktu!

Extremely bright, he studied at The Modern School and did his graduation in Chemistry from Delhi University’s St Stephen’s College and would flaunt his French with aplomb.

He was a strident environmentalist and was the editor of the Global Journal of Sustainable Development. He was also an advisor for many national committees – Government on Education and National Integration, and was awarded the Padma Shri in 1976 for youth services.

My own fascination for the mountains sealed in school, in fact, was so strong a push into the world of adventure, that even at St. Stephens’s college, where he had been active in the Hiking Club – I followed his legacy and ultimately found studies getting in the way of my expeditions!

Mountains and adventure soon transitioned from my passion to my profession, armed with his idea of just believing strongly in what one did, come what may. Some of us were the first in the country to get into the world of adventure and adventure tourism. I had signed up on every rock climbing trip, as many expeditions as I could take on, trying to balance my studies and my role as Prefect and Boarding House Captain.

He had actually shown me the way – given me a sense of direction –  towards my profession; towards my life. While I had joined St Stephen’s to try for the IFS or IAS; at the end my passion had overtaken and having taken a year off to hitch hike and climb in European Alps, we set up Ibex Expeditions, a pioneering adventure travel company, along with two other Air Force School friends, Sunil (Joe) Chandra and Rajiv (Thud) Luthra.

In the early 80’s, he would call me to inspire young students of the Army Public School. On a winter day in 1984, with his rock solid wife Mrs Renu Dang who was always full of warmth, we set out to Dhauj for a day of rock climbing.

I later discovered this was also a ploy to check out Anita, my girlfriend at the time, now my wife. Later in the day Mr. Dang called and informed me that Renu and he approved of Anita – that was his way of participating in my choice of a life partner!

Unfortunately he lost Renu Dang in 1993 and was never the same. As a life partner, she had stood by him throughout.

In a message to the Air Force School alumni, he wrote,

“Unlike most of my generation, I have kept growing younger and I’m still learning, or trying to learn, how to keep an open mind, a clean heart, and magnanimity.”

His passion for the mountains led him to be a mentor and inspire many others who followed in his path, and is best summed up in a George Mallory quote,

“How to get the best of it all? One must conquer, achieve, get to the top; one must know the end to be convinced that one can win the end – to know there’s no dream that mustn’t be dared… Is this the summit, crowning the day?… We’re not exultant; but delighted, joyful; soberly astonished…

Have we vanquished an enemy? None but ourselves. Have we gained success? That word means nothing here. Have we won a kingdom? No… and yes. We have achieved an ultimate satisfaction… fulfilled a destiny… To struggle and to understand…”

Mr Dang was an inspiration to the thousands who walked his path. He was last seen in vigour at his beloved mountain estate in Landour.

We will miss him dearly and our thoughts are with his children Himraj, Rupin and Vibha, along with the grandchildren Ahilya & Aranya and Bagini and Dharanshi.