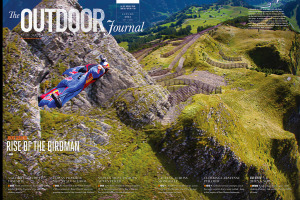 Rise of the Birdman

From kindergarden teacher to wingsuit flyer: how a young graphic designer converted his dream into a reality by being hardcore. From watching viral YouTube videos to becoming them - this is the tale of Jokke Sommer.

Videos of cats may be extremely popular on YouTube, but when Jokke Sommer put up a few clips of him being superman for his friends back home to see, he almost broke the Internet. It was the golden age for wingsuit flying- not many people participated in the sport, while others didn’t know what it was. Being several thousand miles away from home, he uploaded his GoPro footage onto YouTube for his friends and family back in Norway to see; he didn’t realize his videos would garner millions of views. The story of how a snowboard instructor, motocross rider, kindergarden teacher and graphic designer, become the king of the sky – one of the world’s most prolific proximity wingsuit flyers.

Jokke stands on the edge of a high rocky tower, looking down. It’s nearly a 3000m vertical drop to the distant valley below and the streets of Chamonix. He looks behind him, an alpine universe where the sharp granite triangle of the Mont Blanc du Tacul punctuates the rise up to the snowy mound of Western Europe’s highest peak. He rustles his two-layered nylon batsuit, he’s comfortable in it, the webbed wing surfaces flapping between his legs and under his arms.

At an elevation of 4000m, this isn’t going to be like any other jump he’s done before. Taking in the majesty of the French Alps, he thinks to himself, “what am I going to eat for dinner tonight”? Unserious thoughts help him concentrate. Taking a deep breath, he jumps into the deep void.

He feels the familiar weightlessness of freefall, the plunge into limbo, the butterflies in his stomach slowly gathering into formation as he plummets rapidly towards the earth.

Three very long seconds tick away as he falls to the ground.

He spreads his arms and legs, opening the suit’s wings, straightens his spine, pushes his shoulders forward, and straightens his legs as his suit fills with air. The death-fall turns into a glide, slowly at first, but rapidly accelerating, faster and faster, and an instant later he’s flying forward, hurtling at 200kmph.

Flying in proximity, close to the mountainside, gives him reference points so he can navigate. While altering the amount of tension he applies on the fabric, an unfamiliar emotion of fear comes over him and he feels like he’s about to lose control. Pulling his arms in, he narrowly avoids a rock jutting out of the cliff face, and losing his edge, he just about begins to spin out of control. “Man, my girlfriend is going to kill me if I die”, he thinks.

Born in Oslo in the summer of 1986, Jokke was always restless. As a little boy, he was fascinated with the sky, with speed, and heights.

“My father put me on alpine skis almost before I could walk. I enjoyed it, became quite good, but switched to snowboarding because I could do bigger jumps and be in the air more”, said Jokke, with a satisfied grin. Perpetually in his brain’s instant gratification hot-spot, all his activities had something to do with the art of flight. As a teenager, Jokke tried out motocross in a freestyle park he created- in his backyard. “My friends and I were literally flying in the air on our bikes”, he confessed.  Putting his dream of flight on hold, he pursued motocross seriously for a while. However, he had to compensate in his free time. A graphic designer by profession, he knew he didn’t want to live most of his life behind a desk, so he started watching YouTube videos of people living his dream – BASE jumpers, skydivers, motocross riders- he would watch their films over and over.

Apparently not satisfied with the amount of adrenaline being expended in his hobby, he yearned to transition from motorcross, although in retrospect, it proved to be a crucial part of his youth, introducing him to the world of extreme sports. He didn’t know about wingsuit flying at the time. This was 2004.

A few years later in 2007, he received a call from a close friend, Jorgen Eriksten, asking him to go get a skydive license together. But the plan couldn’t have come at a worse time. He’d also just gotten the chance of a lifetime, to go ride in Spain with Andre Villa, one of the best freestyle motocross riders in the world.

It was an incredibly tough decision. Impulsively, he took a massive gamble to prioritize his childhood dream. He sold his dirt bikes to fund his Accelerated Free Fall course in Oslo.

In 2008, Jokke traveled to Perris, California to complete 250 skydiving jumps in two months. But this wasn’t enough – skydiving was only a gateway drug. Shortly after, he returned to Kjerag, Norway and signed up for a BASE course. 20 BASE jumps and two dozen wingsuit videos later, Jokke tried on his first wingsuit. “After that, I knew I couldn’t turn back. I knew this is what I want to do with my life. This is fucking awesome”.

The Golden Age of Wingsuit Flying

“At first, I was always flying like shit”, Jokke said, quite matter-of-factly, while I Skyped with him. Sounds of waves crashing in the background, he was talking to me from Hawaii. Just cruising along and jumping from planes – he wasn’t interested in proximity flying. But after many freefalls, he decided to give terrain flying a chance. Suddenly, he found it was easy, and he was getting better. He liked the context that the cliffs and peaks gave him. Flying closer and closer and taking risks, this became his daily diet. He started putting up videos on YouTube for his friends to see.

The next time he logged into his account he would find that he had garnered over a million views. Going viral was totally unexpected – not many people were participating in the sport at the time. “I was working part time as a kindergarden teacher, and part time as a snowboard instructor, but mostly, I was trying to not work at all so I could be in the sky”.

As his video’s view counts increased exponentially, people started noticing. He randomly got picked up by a Norwegian TV show and was meant to be the cameraman-flyer. Because he was so enthusiastic, he instead landed the main role as the protagonist-wingsuit-flyer.
“Red Bull had heard about me but didn’t want to get involved because I was known to be the most hardcore, and slightly risky”, said Sommer.  However, now RB wanted him as their athlete, and after the TV show, the deal went through and that’s how it all started. Shortly after, he got GoPro’s attention. His background in media and graphic design helped him edit and post his “Dream Lines” series on Youtube, which catapulted him on to the map, gathering over 10 million views.  He had always wanted to fly – he would never have imagined that he would become the world’s ballsiest flying squirrel.

The future’s uncertain but the end is always near

We’ve all had dreams of pummeling through the air like a superhero.  Take Franz Reichelt, who jumped off the Eifel Tower in 1912, to test his parachute-wingsuit prototype. Unfortunately, he died due to a heart attack before hitting his head on the pavement. Since then, we’ve had technology on our side. It’s a sport that’s growing very fast, however, it takes time to develop skills to fly. Due to the huge interest of people entering the sport, people are eager to be instantly gratified – to be hardcore immediately.

“It takes you a long time to fly 100%. I’m not even close to being fully trained. I have 10-20 years more till I can really say I’m fully trained”, Jokke tells me modestly, hours before jumping out of a helicopter over Switzerland. Understandably a risky sport, Jokke has his share of concerns and thoughts regarding the increase in popularity for the sport. “I love what wingsuit flying has given me. It’s something I want to learn more about. A lot of people want to get into the sport as they see the dream of flying coming true”. According to him, for some people, it’s the lack of training and the lack of knowing exactly what to do. However, one can also be incredibly skilled and unlucky. At the end of last year, the wingsuit community had 24 fatalities.

“Do what you love – everything is kind of fun”

When asked about his interests apart from wingsuit flying, with a straight face, he replies, “girls and partying”. In his usual laidback tone, he tells me, quite frankly, “I used to longboard but I felt it was too risky – too much moving traffic and downhill.” Yes, he was serious – one of the world’s best BASE jumpers and wingsuit flyers is afraid of longboarding.

Much like the Obama campaign, Jokke is a poster boy for change – the graphic designer, snowboard instructor, kindergarden teacher, wingsuit flyer, BASE jumper, is now also training to become a big wave surfer. Involved in a project where pro surfer Nicola Porcella teaches him how to surf and he teaches him how to wingsuit fly, the great switcheroo called “Lift-Off” will soon air on TV. “It has become my second obsession, and now I’m trying to conquer 30ft waves. It’s very different to wingsuit flying but I love a great challenge”.

“Man, my girlfriend is going to kill me if I die. At this point, I’m like, man I fucked up. This is it. But then I started thinking of my family and how pissed off they’d be. And while I was thinking this, I was actually correcting the situation, and it took about 1.5 seconds. It felt like eternity. I cleared it by a few centimetres. It’s not fun, but it’s good to learn”.