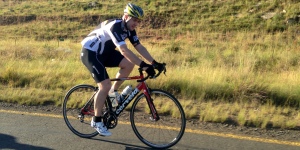 Fat to Fit to Ironman – All In a Year

This is a first-person account of a fitness enthusiast's journey from being an overweight entrepreneur to completing his first Ironman in a span of a year.

Beep beep beep. It’s 04:45 AM and the ring of my alarm is sounding me to battle yet again in what seems to be the drumbeat of my life these days. I summon every bit of willpower in my body and get out of  bed. I make my way to the hallway, put on my ASICS running shoes and slip out into the early morning for a run.

I am currently training for my 2nd Ironman, which will be my 10th triathlon within my first year in the sport.  This, if anything, is a tale of how addictive being healthy can be.

I never thought that I would complete a triathlon, let alone an Ironman. Ironman is an audacious affair for unnaturally fit superhumans – I did not fit the bill. Like many others, I had never really learned how to swim (as a matter of fact, I had always lived in such cold conditions that I truly didn’t know how to swim 25 meters). College had also taken its toll, and I found myself to be 120+ kilos in January 2013. A year later, I called up Gerhard de Bruin, a professional triathlete and coach from South Africa.

I explained to Gerhard that I would like him to coach me for the Ironman South Africa in April 2014, 3 months later. To be honest, I begged Gerhard to take me under his wing as I had signed up for the rapidly approaching race, didn’t know how to swim, had never run longer than 21.1 km or biked farther than 50 km. In short, I was screwed and only professional help along with a good deal of discipline and willpower could get me across the finish line.

At first, de Bruin was reluctant to take me thinking that this was a short-term fad that would end soon.  I told him how I had spent the previous 12 months losing 20 kilos and how I was on a journey that would not soon end but continue for years. I had been smitten by exercise and the love for running. Gerhard gave in and took me on under the condition that I would come and work with him in South Africa in order to prepare for the race. Deal!

I spent most of January and February swimming and running. The swimming, daunting at first, turned out to improve much faster than anticipated. After 3 sessions in the pool with a swim coach, I developed the technique necessary to build my swim. I spent 1-2 hours in the pool 5 days a week and soon hit the 1km mark without stopping. I felt unstoppable!

Running however was much tougher. I had been running much of the previous year in a preparation for a half marathon that I completed the previous September. After the race, I had rested on my laurels for too long and effectively had not been running since. I started running again at a slow pace for 45 – 60 minutes every day and felt incredibly out of shape. Being heavyset, I knew that the run in the Ironman would be very tough – a matter of survival as opposed to speed. I spent my time prior to South Africa improving my weekly distance from 0 to around 50 km.

Gerhard kept checking up with me to ensure that I did not get injured. “How’re you feeling Fred?” was the start of a daily dialogue on WhatsApp, and my program was adjusted continuously to make sure that I didn’t over train or injure my self. I cannot stress how important this has been for me. I am the type of person that will run 9 km barefoot in a race if I catch a puncture on my bike – I simply refuse to give up. I have always considered my body something that I should conquer, but Gerhard taught me to listen to my body  – a valuable lesson for a knucklehead such as myself.

The Training in South Africa – a month before the race

March rolled on and I flew down to South Africa a good month before race day. I had taken all the vacation I had from work and was ready to hit the pavement in my New Balance Minimums – a pair of forefoot running shoes that I had bought because they looked fast!

Landing in South Africa, I was picked up at the airport by a fellow athlete under Gerhard and we proceeded to drive to the middle of the country to train at Gerhards ‘De Bruin Train Ironman Camp’ for a week in a nature reserve. We drove for 6 hours into the most picturesque of landscapes and finally arrived at what looked like a scene from a BBC Nature Documentary.

We had barely landed before Gerhard had us get our bikes ready and go for a “short” (read 50 km) ride in the hills. Before flying to South Africa, Gerhard had asked me to do a few hills to get ready and so I felt that I had already embarked on my very first training ride in Africa. Boy was I wrong. After 10 minutes, we started climbing “up hill”. My heart rate shot up and I felt like I was going to die. My heart was pounding and I finally had to get off the bike. What had I gotten myself into? It turns out that 2,200 meters altitude makes a difference in your ability to perform and I felt disillusioned. Not only did I doubt my ability to finish an Ironman 4 weeks later, so did everyone else at that camp.

The will shall find a way, slowly

Within a week, I got acclimatized  to the altitude and started biking and running over long distances. First conclusion: It is incredibly dumb to run a longer distance in barefoot speed shoes with no support after biking 100+ km.  I quickly developed a pain in my knee as a result of running in the wrong shoes and was ordered to get rid of the shoes.

Thankfully, with the help of a great physiotherapist at camp and a change of shoes to a pair of Asics Gel Cumulus 15, the pain quickly disappeared and I was back to running. I spent the following weeks biking and running a lot before tapering a week for the race.

4 AM on race day arrived. I woke, got ready and made my way down to the transit area and checked my bike and equipment three times to be on the safe side. Nothing could have prepared me for what was to come. Standing on the beach, the cannon went off and I started running with around 1,500 fellow athletes into the water – the start of a very long day. My swim went perfectly and the bike-run was spot on the expected time. I rode hard, got off the bike 20 minutes ahead of schedule and was off on my first ever marathon.

People say that an Ironman race starts at the 21 km mark of the run and I couldn’t have agreed more. I had stomach cramps in the middle of the race, as I needed to use the restroom and couldn’t find one. I finally found one at the 26 km mark. My target for the day was a time of 13 hours 56 minutes and I realized at the time that I would have to keep a consistent pace for the rest of the race in order to make the time.

For the remaining 16 km of the race, I kept a consistent pace without stopping. I had to dig deeper than ever before and learned a lot about myself in the process. I crossed the finish line in the 13 hours, 57 minutes and 22 seconds with my hands held high. I felt amazing. I did it – against all odds and the belief of most of my peers I did it!

I now intend to repeat Ironman South Africa in 2015 where I aim to significantly improve my time. The world is filled with crackpots telling you what you can and cannot do. Very few are willing to join your team and truly find a way to help you achieve your goals. A good coach will do this for you, and Gerhard De Bruin is such a coach.

I encourage anyone who asks to do an Ironman, and I warmly recommend that they start with a shorter distance. My greatest mistake was hubris, but I managed to get through the race just the same 😉

Frederik Flagstad is an entrepreneur and a fitness enthusiast based in Copenhagen, Denmark. He is currently training for his second Ironman, which will be his 10th triathlon within his first year in the sport.