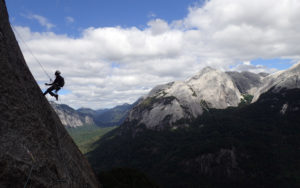 Cochamó is widely regarded as the Yosemite of South America.

With lifetimes of untapped climbing potential on its granite walls, Robbie Phillips knew it would be a great place to plan an expedition with the goal of establishing a hard, new big-wall free climb. Over five weeks down there earlier this year, he found his dream project.

When British climber Robbie Phillips told people he was going to Patagonia, they pictured the jagged skylines of Fitz Roy and Torres del Paine. So most were surprised to learn that he was going to a different rock Mecca, an area that has gained the reputation as the Yosemite of South America, namely Cochamó.

The reputation is well earned according to Phillips. “I love Yosemite, and I felt like Cochamó was like Yosemite without the crowds.”

Robbie traveled there with his friend Ian Cooper, another Brit currently working towards his Ph.D., and a kind of “eccentric, hippy, Albert Einstein-y” guy. Though Cochamó was Robbie’s idea, he knew that Cooper was the right partner for the job since he likes his climbing adventures to go beyond the ordinary.

After a successful fall season in Yosemite in which he free climbed both Golden Gate (VI 5.13a) and Pre-Muir  (VI 5.13d), Phillips was raring to try his hand at establishing his own, big-wall free climb, something he’d never done. He’d never even aid climbed for that matter. All he knew about Cochamó was that there were “big, jungle-y walls.”

When they arrived in the valley, Ian and Robbie spotted their line almost instantly. La Junta—the nearest wall to their chosen campsite—towers some 900 meters above the valley floor. A diagonal, orange stripe cuts through the center of the wall. According to Robbie, both he and Ian looked at it and thought, “‘That looks cool. That could be climbed.’” Apparently Austrian climber David Lama was the only one to try it previously, and had been rebuffed by difficult, dirty features.

Ian and Robbie started aiding up the wall to reach what they expected to be the stellar, crux pitches, and what they found was everything they’d been hoping for: aesthetic rock, with super difficult, sustained climbing that seemed just barely possible. From the valley floor, the line’s defining feature was a thin diagonal seam which turned out to be “one of the most amazing features I’ve ever seen,” Robbie says, describing it as “an undercut rail for 40 meters.” And right after the 40-meter undercut rail, another five-star pitch lay in store: a perfect, open-book, 30-meter dihedral that got progressively smaller the farther one got up the pitch.

Between the crux pitches and varied, thoughtful climbing—much of it in the 5.12 and 5.13 range—on the rest of the 900-meter wall, Robbie and Ian were ecstatic. “We had found our dream project,” Robbie says.

The two climbers didn’t get a chance to free climb the entire route this trip as they only had five weeks in Cochamó and the crux pitches are serious business. “The undercut seam is the crux, for sure,” Robbie says. “I think it will go at about 5.14c. With that grade in mind, I don’t really know anything else that hard on a big wall in South America. And then I think the next corner pitch will be in the 5.13c/d range, as well.”

The crux seam can be broken up into smaller pieces as follows: 10 meters of 5.13b climbing, followed by a technical V9 boulder, without a rest in between; then another V8 boulder problem followed by 5.13b/c climbing to the end of the pitch.

Now that they’ve scoped out the line and cleaned it up, Robbie and Ian already have plans to head back next January. The coming year is all about training and getting stronger. They are heading to Yosemite next fall, where they have the world’s most famous climb, the Nose on El Capitan, in the crosshairs. “I figure the Great Roof will be really great training for the undercut seam pitch,” Robbie says. “Our idea is to try to work on that one pitch a lot and get really strong on that kind of climbing. If I’m able to send it, my goal will be to do laps on it. We’ll also be able to dial in our big wall tactics and get more efficient.”

As they dream of La Junta wall over the next 10 months, they’ll also be mulling over possible names for their route. Robbie says, “I have a bunch of notes that we took on potential names. We’ve currently been calling it the ‘Wall of Late Afternoon Light Project,” — a riff on the Dawn Wall, which is also known as the Wall of Early Morning Light. Whether that name sticks remains to be seen.

At just 27 years old, Robbie has already free climbed multiple routes on Yosemite’s El Capitan. He’s climbed all over the the UK and Europe. Yet he thinks this new project is the best he’s encountered. “It’s kind of like a parent talking about his child,” Robbie says, “but in this case I really do think it’s the best thing I’ve ever climbed. So many technical, beautiful, aesthetic pitches. Stem corners, aretes, offwidths, laybacking, undercling bulges—everything.  And it’s the most obvious looking line you see when you arrive in the valley. As a climber you have to wonder ‘Is that possible?’

“I’m certainly going to try to show that it is.”

All images courtesy of Robbie Phillips