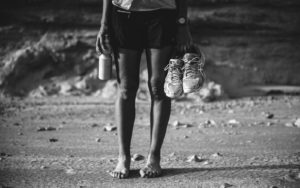 Running out of Water: An Ultrarunner’s Crusade Against the World’s Water Crisis

Australian ultrarunner Mina Guli is currently in the middle of a monumental undertaking: over the course of 40 days, she aims to run 40 marathons on six continents along six of the world’s major waterways.

And though she loves running, she isn’t doing it just to “push her body or set new records.” Rather, she is doing it to draw attention to the world’s water crisis.

While most people know that access to clean, potable drinking water is a major issue in much of the world, the problem is actually more far-reaching the further into the future one looks. It is a problem of scarcity. “Most people don’t know that by 2030, there will be a 40% difference between the demand for water and the supply available,” Australian ultrarunner Mina Guli told The Outdoor Journal. With her 6 River Run expedition, in which she will run the equivalent of 40 marathons on six continents along six rivers in 40 days, Guli is hoping to inject a greater sense of urgency into the conversation around this problem.

Fittingly, Mina began the 6 River Run on March 22, World Water Day. The first leg of the expedition saw Mina running along the Colorado River. “It’s a phenomenally powerful river,” she says. “ I never really understood that until I went to the Grand Canyon and saw how it carved through the rock.”

The other five segments of the run will see her paralleling the Amazon in South America; the Murray Darling in Australia; the Yangtze in Asia; the Nile in Africa; and the Thames in Europe. If all goes well, she will finish on May 1, 2017. By the end, she will have run 1,688km. (And though the mathematical neatness of 40 marathons in 40 days is nice, she will in fact be running more than a marathon per day, since travel days between continents are included in the 40 day total. Most days she will run at least 52km.)

This is not the first time that Guli has embarked on a journey of epic proportions to draw attention to the water scarcity crisis. In 2016, she completed the 7 Deserts Run, in which she ran “40 marathons across 7 deserts on 7 continents in 7 weeks.” It was during that expedition that she first conceived of the 6 River Run. While running in the Richtersveld Desert in South Africa, at the southern tip of the Namib Desert, Guli was trying to cross the Orange River: “We realised we wouldn’t be able to because the river levels were too low. We saw where the level used to be—it had dropped seven meters in seven years. I realised this was a story I needed to tell.”

Even before the 7 Deserts Run, the water crisis was the animating force in Guli’s professional life. After working as a lawyer in Melbourne, for the World Bank in Washington, D.C., and as a co-founder of Peony Capital in Beijing, in 2012 Mina founded an organisation called Thirst. According to its website, Thirst “is tackling the world’s water scarcity crisis by educating and engaging the next generation of global consumers.” The organisation holds workshops and events across China, where over 490,000 students have graduated from its “WE Water Experience” program.

Helping to guide Thirst’s agenda and the messaging around Guli’s running projects is the UN’s Sustainable Development Goals program, which lays out “17 goals to transform our world.” Global Goal 6 focuses on ensuring access to clean water for people all over the world. There are numerous subgoals within Global Goal 6, but the broadest and most fundamental aim is “to achieve universal and equitable access to safe and affordable drinking water for all” by 2030.

In explaining the inspiration behind her spectacular feats of endurance, Guli tells me, “I wanted to do things that make people ask ‘Why?’ If it gets people like you to pick up the phone and engage in a conversation about water—what we’re doing right now—then I’m accomplishing my goal.” While her sweeping, ambitious expeditions serve as good attention-grabbing vehicles through which to convey the message about the water crisis, Guli’s mode of travel also allows her to learn about the issues more intimately. “Running allows me to go and experience things, to speak to people, to walk beside people, to see with my own eyes what’s going on,” she says. “You see things more slowly, and it allows you to appreciate things more deeply.”

After just the first few days of the 6 River Run along the Colorado River, Guli has already gained new insights. Camping at night, she saw the “gleam” of Las Vegas, a place often associated with the kind of material excess that contributes to the water crisis. But surprisingly, Mina says Las Vegas is a paradigm of efficient water use. The city uses innovative processes to clean recycled water and the Southern Nevada Water Authority has attracted world class water technology experts and companies to the area.  “Las Vegas offers a real lesson for all of us in how we can use water more efficiently,” she says, noting that the city has plans in place to ensure that there is enough water to last until at least 2050.

While Guli is firmly focused on the biggest water problems facing the planet with her run, she’ll have to deal with smaller, more personal, water-related problems as well. When asked which river will be the hardest, Mina says she thinks the Amazon will prove the most troublesome. “I’m quite worried about the Amazon because it will be very wet. Running with wet feet is not conducive to avoiding blisters.” But even when it gets hard, she’ll power through; the stakes are just too high. “I think about the value of what I’m doing and the value of it for future generations and that definitely, definitely is what keeps me going.”

To follow Mina’s progress, learn more about the global water scarcity crisis and what you can do, visit her website at http://www.minaguli.com.