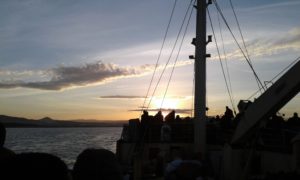 Searching for Wild Chimpanzees Part 1: Languishing on the Liemba

A journey to find some of Africa's last remaining wild chimpanzees starts (somewhat un-fittingly) with a ride on the world's oldest passenger/cargo steamer—a WWI warship that's been trudging along since 1913.

Waiting in Mpulungu, we seemed to be the only people in Zambia who knew the Liemba was coming…

The Liemba is a passenger and cargo ferry that runs along the eastern shores of Lake Tanganyika, stopping along the way to pick up and drop off passengers, between the ports of Mpulungu in Zambia and Kigoma in Tanzania.

Built in Germany in 1913, the Liemba (initially called the Goetzen) was taken apart, packed into 5000 boxes and shipped to Dar es Salaam (at that time part of German East Africa). From Dar es Salaam the boxes were taken by train to Kigoma, where she was finally rebuilt and launched onto the lake in February 1915.

During the First World War the Liemba was converted into a German gunboat, and was one of the three ships the Germans used to control Lake Tanganyika during the early part of the war. The Goetzen initially gave the Germans complete supremacy on Lake Tanganyika. She ferried cargo and personnel across the lake, and provided a base from which to launch surprise attacks on Allied troops. In July 2016 during the German retreat from Kigoma, her captain had her scuttled in order to avoid the ship falling into Allied hands. Luckily, the engineers in charge of scuttling the ship loaded it with sand and covered the engines with a thick layer of grease before carefully sinking her, this meant she would be well preserved despite ultimately spending over a decade under water. There was an initial, and not entirely successful attempt to salvage the Liemba/Gotzen by the Belgians in 1918. In 1924, a British Royal Navy salvage team eventually raised her and finding the layers of grease had preserved the engines they decided to rehabilitate it. In 1927 she returned to service as the Liemba. Today the Liemba is the last vessel of the German Imperial Navy still actively sailing anywhere in the world.

The Liemba has had a colourful past. From cargo and passengers, to naval gun ship and back. She was the inspiration for the CS Forrester’s novel ‘The African Queen’ and the subsequent movie starring Katharine Hepburn and Humphrey Bogart. In 1997 the United Nations High Commissioner for Refugees used the Liemba to help repatriate more than 75,000 refugees who had fled Zaire during the First Congo War. In May 2015 she was used again by the United Nations, this time to evacuate 50,000 refugees fleeing from the troubles in Burundi. The Liemba has now settled down to a more sedate, if rather unreliable, ferry service. Ferry operations ostensibly run twice a month between Kigoma and Mpulungu, though we found ourselves waiting in Mpulungu for a ferry that everyone said wasn’t coming. Despite having it on good authority that the Liemba was on its way (we knew a guy working onboard), the port authorities in Mpulungu were adamant it would not be arriving that day, the next day, or in fact any day in the foreseeable future! We waited patiently, and finally it appeared on the horizon, forcing the staff at the port to concede we perhaps were right after all.

Accommodation on the Liemba ranges from a handful of first class cabins, to seating for up to 600 third class passengers. We managed to secure ourselves one of the first class rooms, though remove all images of the QE2 from your mind when picturing our ‘state room’! We had a bunk bed that took up half the room, a small sink in one corner, one plastic garden chair and thankfully, a working fan. As third class is situated below decks in the sweltering bowels of the boat, the bulk of the passengers seem to sleep on deck, arranged in an array of yoga-like of positions, on all available surfaces. One family had come well prepared with a large double bed mattress that they ensconced themselves on for their journey. It was not uncommon to find someone had gone to sleep in our doorway blocking the only way out of our cabin.

There are docks at Kigoma, Mpulungu and Kipili but at all other stops passengers and goods have to travel between ship and shore on small local boats. This provided hours of entertainment for us passengers, watching with amusement, as joining or departing passengers had to scrabble from one bouncing boat to another, sometimes in the middle of the night. Watching from the upper decks I saw ‘generously proportioned’ ladies in their ‘Sunday best’ and toting large handbags, being hoisted unceremoniously aboard, babies were passed like packages from one set of arms to another; all the while the oarsmen on the smaller boats struggled to keep things relatively stable, and countless instructions and advice were shouted from all directions.

We had left Mpulungu basically empty, doubtless because no one in Zambia, aside from us, knew the Liemba was coming and no one had time to prepare any cargo or get ready to travel themselves. With each stop along the way passengers boarded and the empty hold gradually filled up with bags of grain and an endless variety of other cargo, the ships crane working overtime. Having started in Zambia with a few boxes of apples and oranges and apparently very little else in the way of cargo, by day two the deck was full of chickens and ducks, clucking and quacking, numerous motorbikes and bicycles and an extensive and aromatic collection of dried fish heading to market.  We woke one morning to discover two large containers full of live tropical fish had somehow been hoisted aboard and were now ensconced like giant aquariums, complete with filters, on the foredeck. Travelling at a ‘stately speed’ of 11 knots/20km an hour… half way through day three we passed our destination, the remote and inaccessible Mahale Mountains National Park, and thirty minutes later it was our turn to clamber down the side of the Liemba and into one of the flotilla of wooden boats who were waiting below to ferry passengers to Lagosa. Six boatmen wielding homemade wooden oars paddled us to shore, while we balanced our luggage precariously on our laps and a guy with a bucket worked even harder than the oarsmen, bailing out the bottom of the leaky vessel.

Reaching shore, with a quick haggle over the cost of our ‘water taxi ride’, we were back on dry land and ready to start the next leg of our journey to Mahale and some of the last remaining wild chimpanzees in Africa.