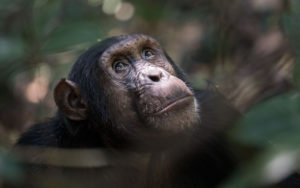 Mahale Mountains National Park, Tanzania, on the shore of Lake Tanganyika, half-way between the Burundi and Zambian borders, is home to a thriving population of some of the last wild chimpanzees in Africa.

Mahale Mountains is one of the few National Parks in Africa that can only be experienced on foot. The only way in or out of the park is by boat and in the entire 1,613 sq km park, there is not a single road. This is a wholly unique wilderness, a long way off the beaten track; but the lake, the beaches, the extraordinary forest and of course, the chimpanzees make it a journey well worth making.

Fifty times the size, and infinitely more diverse than better-known Gombe Stream National Park (made famous by researcher Jane Goodall), Mahale is one of only two protected areas for chimpanzees in Tanzania. Mahale has a population of approximately 800 chimpanzees, though only one group, of about 60 individuals, have been semi-habituated to human visitors. ‘M’ group, named by Japanese researchers from Kyoto University who have been conducting research in the park since the early 1960s, was the group we would be spending our time with, in the park.

If trekking five to six hours a day up very steep inclines in humid jungle conditions is not for you, then perhaps cross Mahale off your destination list! ‘M’ group’s territory is approximately 39 sq km, and covers beach, lowland forest, hills and valleys, much of it almost impenetrable. The seasons determine where in their range the chimps are to be found. Different fruits ripen at different times and in different places. So knowing what is on the chimps ‘shopping list’ will determine where they are most likely to be found; this is where your local trackers are indispensable.

Feeling Inspired? Take it into your own hands to go and explore wildlife in Africa with The Outdoor Voyage

Before Mahale became a national park, much of the area was inhabited by local tribes. In these previously inhabited areas, one doesn’t have to look far to see the cultivated plants people left behind—palm trees (cultivated for oil), mangos, guavas, and lemons. When these trees are fruiting they provide part of the diet of the chimpanzees, as well as some of the park’s other primates (including red-tailed, vervet and colobus monkeys and yellow baboons). When the human residents vacated, the decision was made not to eradicate the fruit trees, as their presence would help prevent too much competition between the rapidly growing baboon population and the chimpanzees. The fruit trees are concentrated primarily along the shoreline, where the camps are located. When the fruit is ripe chimpanzees come down quite regularly from the hills and dine right by the camps.

Unfortunately, ‘exotic’ fruits were not on M group’s ‘shopping list’ when we were in Mahale. Consequently day 1 was a long trek. Two hours hiking straight uphill, accompanied by Greystoke Mahale’s perpetually smiling ‘three musketeers’—Mwiga, Mathius and Butati. The group was dripping with sweat and our clothes clung claustrophobically to our damp bodies. Nothing can adequately describe the adrenalin rush that kicked in when we heard the calls of the chimpanzees in the forest. Time, distance, aching legs—all was forgotten—as shrill calls echoed through the forest canopy. Energy levels instantly revived and we carried on through the dense vegetation, getting closer to our target, anticipation growing. Suddenly there they were…

We had been too slow to catch the main group of chimpanzees, who had moved off by the time we clambered up the slopes. They had been hunting red colobus monkeys, and after a successful hunt had descended, at speed, back down the mountains we had worked so hard climb! Fortunately, a group of three had remained—mother, baby, and another female. Mum was eating the remains of the monkey carcass. Baby was clearly bored witless. He swung in the trees, hanging from one arm and then the other, performing aerial summersaults and occasionally reaching out to touch and play with the tail of the red colobus monkey that his mother was chewing…a gruesome toy.

After this tantalizing view, we didn’t see any chimpanzees for a few days and had to wait patiently for the trackers to find the seemingly elusive ‘M’ group. Finally, we got word on day four that the trackers had located them and off we set up the mountains again.

Knowing what to expect didn’t make our climb up through the rainforest any easier! We could hear the spine-chilling calls of the chimpanzees hunting colobus monkeys. Another successful hunt and we heard the whoops of excitement, reaching the group in time to witness group politics playing out. The alpha male took possession of the kill and dragged the progressively bedraggled corpse through the forest with the others in hot pursuit. Once in sole possession though, the alpha male was obviously having difficulty deciding his priorities…eat his prize or ‘romance’ one of the females…clearly quite a dilemma!

To prevent interference with natural behaviour, time in close proximity to the chimps is limited to one hour. When our hour was up it felt like we had been with the group for both seconds and hours. The adrenalin and excitement followed by time to observe group dynamics and get really close to so many different individuals was an amazing experience.

Researchers have been studying chimpanzees in Mahale since the 1960s and the success of this research depended on the habituation of chimpanzees to humans. This was initially achieved by feeding chimps sugarcane and bananas, but once good levels of habituation were established, feeding was decreased and by the late 1980s totally abandoned. Researchers now follow the chimpanzees as they range freely in the forest, monitoring their activities, social structure and learning about our closest genetic relative’s use of medicinal plants in the wild. Chimps in Mahale use plants to treat a variety of ailments; a good example of this is roundworms. Chimpanzees have been recorded eating two different plants to treat themselves for worms. One plant contains a chemical that kills the worms and the other is a fibrous leaf that the chimps fold up, swallow, and ‘evacuate’ whole; physically scraping the adult worms from their intestines.

Sadly though, whilst chimpanzees are adept at treating a number of ailments with plant medicines, they are not immune from human diseases and in some cases, these have been fatal. A number of years ago flu, transmitted from humans to the chimpanzees, resulted in the deaths of large numbers of the community. For this reason, everyone in proximity to the chimps now has to wear surgical masks, not eat or drink, and if unwell refrain from visiting them at all.

Humans are supposed to maintain a minimum distance of 10m from the chimpanzees at all times, though this is sometimes easier said than done. The groups are constantly on the move, completely indifferent to us humans, regularly passing and sitting very close by. We had been warned not to be startled or to run away if charged at by any of the chimps and whilst this seemed good advice, it was not as easy as it sounds! Chimpanzees are many times stronger than humans and rather intimidating when charging downhill, whooping and screaming. Holding my ground as six young males rushed past close enough for their hair to brush against my bare legs took considerable will-power. Every morning chimpanzees descend from their night nests to feed on fruits, leaves, buds, and blossoms. Once their tummies are full they become vocal and this is the best time to locate them. Rama, another of our knowledgeable guides, this time from Kungwe Beach Lodge, told us that at 10 am we should expect to hear them. At 10.05 am we heard the first calls. Chimps are amongst the noisiest of all wild animals and this certainly makes finding them in the dense undergrowth a little bit easier. We located a group of around 15 individuals under dense foliage. Too dark and too confined for photography, we put aside our cameras and focused on their behavior and mannerisms. Watching an infant playing with his elder sister, we laughed as we watched him pretend to be a ‘grown-up’; stomping on the ground and doing mini displays with puny twigs and leaves. Some of the older males arrived and we saw another side to them, as they tickled and patted the infant in passing, before settling down to groom one another.

Another day and another five hours of trekking. Having started the day on a visible path, as soon as we heard the chimps vocalizing, right on cue at 10.01 am, we veered sharply off the trail and spent at least two hours ‘bush bashing’ through prickly vines and thorny vegetation. Samjee, another of our guides, took the lead, machete swinging, hacking a trail through the undergrowth. We spent much of the day on hands and knees crawling under bushes, scrabbling through dense undergrowth and using vines like ropes. When we had first heard the chimpanzees that morning they were clearly celebrating another successful monkey hunt, but by the time we reached them there was no sign of the meat. Many of the group were high up in the trees and we only caught glimpses of them. We sat down and focused on the ten or so individuals on the ground close at hand. This was our last day in Mahale and we used the opportunity to quietly observe the group relaxing in the shadows. Eventually, it was time to leave, and we headed down to the lodge. But Mahale had not finished with us yet. Halfway back we found a lone female chimpanzee with her baby up a tree beside the trail. The baby bounced up and down on branches, trying his best to intimidate us, performing some daredevil midair stunts. We could have watched him for hours, but time was up and we had to go. We returned to camp bruised, battered and bleeding, but content.

Mondays and Thursdays are ‘rest days’ for the chimps, there is no trekking on those days. Rest days coincide with the twice-weekly flights at the Mahale airstrip (a 90-minute boat ride away). Our last morning in Mahale was on one of these ‘rest days’. We spent the early morning in a wooden dhow out on the lake. Whilst there are lions, zebras, giraffes, roan, sable, and hartebeest on the almost inaccessible side of the Mahale Mountains and we, like most people, wouldn’t get that far. To round off a perfect trip though, we did find a lone leopard sitting calmly on the beach, watching us pass by in the boat, looking like the cat that got the cream.

Feeling Inspired? Take it into your own hands to go and explore wildlife in Africa with The Outdoor Voyage