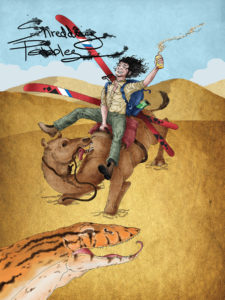 Shredding Pebbles – a Newbie tries to Ski in the Sahara

Having skied in Colorado and in the Himalaya, I wanted to try new terrain.

Naturally, I set off to expedition the Sahara and ski the largest desert in the world – on sand. I wasn’t, however, aware of my moronic, Moroccan destiny.

Carrying skiis and snowboards on a camel, while shooting, and drinking a beer, is challenging. While I didn’t necessarily have to keep one hand occupied with a brew, I knew I had to – the beer was cold, the sand was hot – it just made sense. My camel didn’t like me, he didn’t like the skis, the unnecessary additional weight, but I liked him. As I made it to the first dune, Moroccan (what I innovatively named him) seemed more than happy to be rid of me. “I’m going to sit down in the most terrifying way possible, and catapult you off my back, and while I’m at it, I’ll make sure you’re unable to reproduce in the near future”, is what he must have thought.

My first try on the skis was nothing short of disappointing with a side of comical. Hiking to the top of a sand dune with skis on your back is harassing. Your feet digging deeper into the sand than they usually would, the sight is disastrous – the struggle, the unpleasantness, the falling over, the spilling of the beer (I was still holding it), and the vengeful laughter of Moroccan from down below.

You manage to reach the top; feeling victorious, you get ready to shred the gnarly dunes. I was nervous – the dunes looked steep to me, and for some reason, till this point in my life, I had never skied down one. After climbing thousands of meters (it was really 200m), I gathered my guts and plunged down the dunes. I was moving fast – at a solid 3 kmph (for those unfamiliar with skiing speeds, this is incredibly, painfully slow).

After about 50 yards, I slowed to a halt. I then skied the rest of the way like a penguin, waddling from side to side (penguins cannot ski, but if they tried, they would look like me). I got back on my smug camel, and went to camp, feeling dejected. Bunny slopes are more entertaining than what I just experienced.

The following morning, I set out to climb yet another dune to attempt my second run. Not expecting anything different, I began my ascent. My feet would sink in all the way to the shin due to the weight of the skis on my back coupled with my heavy hiking boots. I left my beers at camp this time. Panting and struggling, I finally reached the top. The view from the top was nothing short of inexplicably stunning. I could see the dot that was our campsite, the baby dots that were our team members. The Sahara never looked so glorious, so daunting, so overwhelmingly deserted. I strapped on my ski boots, tied my hiking boots around my neck, and looked down – it was vertical. I started what seemed to be a promising run – and it happened, again. I was a penguin. Again. I looked like an over-enthusiastic brisk walker, my limbs flaying from side to side. My buddies, who were on snowboards, seemed to be having a better time – the boards just had a healthier relationship with the sand than the skis. At this point, I started contemplating my decisions. Firstly, I had tried skiing on a sand dune, and secondly, I had failed miserably twice.

Spoiler: Fear not as this is not a Shakespearean tragedy – much like a Thai massage, it’s going to have a happy ending.

Sure enough, as I reached the end of the “steep” dune, to my delight, I realized it was not, in fact, the end of the dune. What lay in wait for me was much steeper. I found the height of the dune didn’t really matter, the angle is what made all the difference. The waxing of skis weren’t designed to negotiate with the pebbles of sand. I was finally stoked. As I started my descent, the skis finally started moving. While skiing down a dune, it’s harder to carve like on snow, so I essentially went down straight, legs parallel, catching speed like Niki Lauda. As the wind was slapping my face, I thought to myself, “I didn’t eat breakfast today, I should have. I wonder what’s for breakfast?” But then I thought, “I should probably slow down as I can’t feel my face and I’m most definitely going to eat sand”. Everything a blur, I carved to the left, slowed down my speed a bit, and continued cruising the off-piste. Note to self – don’t be a hero, I could’ve continued without carving, but if I crashed, it wouldn’t have been as forgiving as snow. Remember, snow is softer than sand, and also, eat breakfast in the morning.

I had done it, I had conquered the dune, and I wanted to do it again. Did I do it again? Of course not, it was such a long climb back up. Moroccan wouldn’t take me due to our strained relationship – he thought we had irreconcilable differences. I almost didn’t go on the first run that morning but changed my mind last minute. If you want something, you have to work for it, you have to feel the pain, and you have to take the initiative. Even if you end up looking like a baby penguin learning to walk. Nothing ventured, nothing gained. Also, don’t drink and (sand) ski. But if you must, use a Camelbak.