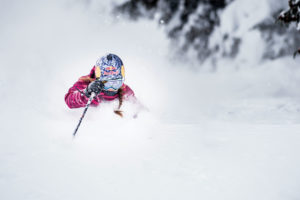 When she’s not jamming on her ukulele, Michelle Parker is shredding slopes all around the world.

One of the most versatile and dominant skiers out there, Parker is a Red Bull athlete who’s starred in numerous ski films, winning many awards and even more hearts.

Michelle Parker, 20, was skiing hard and well, like she usually did, but the day would not end like most. She skied off a cliff and landed on a rock, blowing out her knee. An ACL, MCL and medial patellofemoral reconstruction were just a few of the many surgeries she would require. She had to take a season off, and as a result, lost most of her sponsors.

After months of intense training and strengthening, Parker reached out to Matchstick Productions, a film company specializing in ski movies. “I’m a 100% and I’d like to film with you guys again, but I don’t have any sponsors so I have no support”, she told them over the phone. The outdoor industry is massive and yet very small when it comes to help, camaraderie, and mutual respect. One phone call later, the folks at MSP managed to hook her up with Atomic, a skiing equipment company and Mountain Hardwear, an outdoor clothing and equipment manufacturer. However, Parker wasn’t totally sure of herself at this point as she hadn’t hit any cliffs or skied that hard since her injury. She knew that the companies were trusting her and the fact that she was filming with Matchstick meant she had to be on her best performance. Going into the season optimistic and psyched on her second chance, she ended up nailing it.

At the end of the year (2015), she went to the world premiere of Superheroes of Stoke. When she landed, Steve Reska, who initially worked for Matchstick, but was now with Red Bull, picked her up from the airport and handed her a RB hat. “Welcome to the team”, he said.

“These things happened simultaneously and right after I had hit rock bottom. Injured with no sponsors, and all of a sudden it was like—boom”, Parker laughed. A phoenix from the ashes, she was back on top accomplishing her dreams. This was her comeback year—she had zero expectations but she went out there, skied for fun, and had a great time. She was stoked. She had no idea what was in store for her.

Parker starting skiing when she was one. Her parents loved the mountains and so she was brought up with a deep love, respect, and understanding of the wilderness. Her family moved to Tahoe City, California in 1986 and she was born in 1987. While it was hard to remember a lot of the early years, Parker knew she skied through them. When she was three, she joined a program called the Mighty Mites, an initiative that helped young skiers develop fundamental skills while instilling a joy and passion for the sport. While most kids played with blocks in daycare, for Parker, this was it—she would go to school, the bus would drop her straight to the mountain, and she was free to ski till her parents picked her up. “I think this definitely established the early fundamentals of skiing for me. After this, I started to race and was part of the racing team till I was 15 years old”.

On her main sponsor

Now 29, Parker skis on the RedBull team. For her, and many athletes around the world, getting RedBull as a sponsor is like reaching the pinnacle of the sport. An amazing company that does commendable work representing and helping athletes, they’re known for being fastidious with who they pick to put on their team.

“They’ve been a backbone for me since I got on-board. From teaching me how to freedive to taking me to the Australian outback with a bunch of Navy SEALS, they’ve really helped me push myself mentally and physically”. Conducting an array of health and blood tests—RB always makes sure that the athlete is physically and mentally fit. Always wanting their players to succeed, Parker could go to RB after her injury and get all the physical training she required. Whereas before, when she would get hurt, she would lose her sponsors and have to start over on a clean slate. In the long run, this was a blessing in disguise.

On films and career highlights

Parker worked on many ski films including some with Warren Miller. Whether it’s working at home in Squaw valley or in a far out destination like Greenland, the opportunities in the industry were diverse. “My dream was always to ski in a Matchstick movie. I grew up renting them. One day, I hit a cliff, called ‘the fingers’. Scott Gaffney, a big Squaw local who works with Matchstick, was on the chairlift above me and witnessed it. He introduced himself to me, one thing lead to the other, and I was in”. In 2013, she won Best Female Performance at the Powder Video Awards as well as at the International Freeski Film Festival.

However for her, career highlights aren’t about awards but more about personal, special experiences. “I think for me, these memorable trips are the things that I walk away with having gained a lot of experience. It’s not like I won an award for that trip. Those things don’t stand out to me as much as going on expeditions with really special people. You get to know your surroundings but you also get to explore these individuals because you’re living in such close quarters, spending 24 hours a day with them—they become like family”.

Parker was on a ski expedition in Svalbard, Norway, with legendary skier and fellow RB athlete, Chris Davenport. Filming for a RB series called Faces of Dav in the northernmost civilisation in the world included getting on a sailboat for 14 hours to get to the fjords for their arctic safari. “I think when I’m older and I look back at my career, I won’t remember the awards or winning first place. I’ll remember the epic expeditions with close friends”.

“I set out goals and write them down at the beginning of the year. But further than that, it’s hard for me to see in the future. My life has been very spontaneous—a lot of it has to be with the nature of being a professional skier. Everything is weather based—you’re going to get a phone call and you’re going to have to jump in your truck, or hop on a flight to Europe. I never know what I’m going to do tomorrow”.

Basing her entire lifestyle around going with the flow, Parker’s short-term goals are getting her knee healthy after several injuries and surgeries. She also aims to do exactly what she wants on skis—expeditions and camping in the backcountry for weeks on end are at the top of the list. Long-term goals are to do this as long as she can—“the lifestyle is so fun and fulfilling—I feel incredibly lucky to be in the position that I’m in”.

“Ukulele has become one of my biggest passions. Whenever I got injured, I would get so bummed. But then, I would just pick up the ukulele and instantly be happy”. Parker loves photography—capturing moments on film with friends and putting together edits. She loves to spend time with close friends, whether it’s around the campfire or in the mountains, according to her, that’s a hobby in itself.

“I also love climbing, mountain biking, surfing—anything outdoors. I’ve turned into a swimmer since my injury. Pretty much any athletic thing outside, I’m game for”.

The person who had the deepest, most profound effect on Parker’s life was a legendary skier from Canada, the late JP Auclair. “He just embodied and taught me so much about skiing, about life, about being a good human being. I travelled with him for a number of years, we shared a sponsor, so we got to spend a lot of time together. That was a really special time in my life”.

Another big influence for Parker was the late Shane McConkey, a pro skier and BASE jumper. “Growing up with him in Tahoe, he was our local hero, as well as an international hero. His presence and ability to make you laugh at all times was infectious”.

These are just a few of the many people Parker looks up to. Most of her friends are big pioneers in the industry including pro skier and climber, Hilaree O’Neill. “She’s a perfect example of someone who’s perfect, fit and super driven. She loves adventure and I think that she’s just an awesome woman. Also Emily Harrington, she’s just this badass climber who sets really audacious goals and goes out and accomplishes them”.

Lastly, Parker attributes her love for the outdoors to her parents. Her father was a professional tennis player and so he understands dedicating everything to sport and passion. Her mother has an incredible love and passion for the mountains that has brushed off on her, setting her on the adventurous path since she was little.

When asked what superhero she would be, Parker stated that she’s not familiar with specific superheroes but that if she could have a superpower, it would be to bring joy to people’s lives. “To make people happy instantaneously, I think that’s something I try to do on a daily basis. Making people happy and smiling is a pretty cool characteristic to have. That’d be pretty rad”.

Michelle Parker is one of the founders of S.A.F.E.A.S. The goal is to increase awareness snow safety and avalanches.