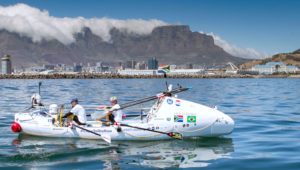 Braam Malherbe and Wayne Robertson want you to “Do One Thing”—anything—no matter how small, to improve the state of our planet.

To inspire people to action, they decided to do one thing as well, only theirs was considerably bigger: They endeavoured to row a boat across the Atlantic Ocean from Cape Town to Rio De Janeiro.

UPDATE: On the morning of May 9, South Africans Braam Malherbe and Wayne Robertson glided into port at Brazil’s Rio de Janeiro Yacht Club, thereby concluding their trans-Atlantic Cape-to-Rio rowing expedition. Their 8,200-kilometer journey lasted 92 days and required approximately two million strokes. On a bluebird Brazilian day, the duo was greeted by well-wishers, media and government representatives from South Africa, all offering congratulations on their improbable feat. To view video of Malherbe and Robertson’s arrival in Rio, click here.

On March 9, when South African Chris Bertish arrived in Antigua and became the first person to stand-up paddleboard across the Atlantic, solo and unsupported, another industrious South African was approximately one month into a similarly huge world-record attempt. Braam Malherbe had left Cape Town on February 7, along with partner Wayne Robertson, with the goal of becoming the first team to row from South Africa to Rio De Janerio, Brazil. If successful, their crossing would also be the southern-most rowing expedition ever completed in the Atlantic Ocean.

And so, for the past two-and-a-half months, Braam and Wayne have been rowing their small boat, the Mhondoro, day and night.  The Outdoor Journal caught up with Braam on April 18, his and Wayne’s 71st consecutive day at sea. They were about 1000 kilometers shy of the Brazilian coast, but had deployed their parachute anchor for the day as the currents and winds were pushing them back eastward. Once finished, they will have rowed some 6,700 kilometers.

After that long at sea, Braam and Wayne were feeling pretty worked. “Between physical and mental fatigue, and sleep deprivation, you lose it a bit,” Braam explained. But despite having faced considerable adversity, they remain positive, their spirits constantly buoyed by the knowledge that they are rowing for an important cause, perhaps the most important there is.

“DOT. Do One Thing,” Braam said. “The DOT Challenge is an app we launched that we want to get millions of people using—like a Facebook for the planet.” The goal is to get people to start changing behaviours that are detrimental to the environment. The campaign focuses on four main issues: water, waste, conservation (of all species), and energy.

How does rowing across an ocean get people to take shorter showers? Or turn off the faucet when they’re shaving? Or any one of the other “one things” Braam has in mind? “This row is a catalyst to show that ordinary people can do extraordinary things,” he said. “And more importantly, we can do amazing things if we all pull together.”

It is a lofty goal, no doubt. But just as each stroke propels Braam and Wayne’s vessel closer to Rio, each “one thing” done by those to help the planet moves us in the right direction.

Braam is an Honorary Game Ranger in South Africa and sees the plight of the rhino as a perfect encapsulation of the environmental challenges facing the world. “The hunting of rhinos symbolises two things for me,” he said. “Greed on one hand, and ignorance on the other. And the human race—we can no longer live in a world of consumption and greed at an unprecedented rate.”

The two rowers have ample time to contemplate big issues and questions on their journey, as most of their time is occupied with simply grinding out stroke after stroke. They take turns: one rows for two hours, while the other sleeps, cooks and communicates with their land-based support team.

When they’re not rowing, they’re liable to be dealing with snafus of all shapes and sizes. “The boat has capsized four times,” Braam said. “Once in a 40-foot wave. Completely upside down, hatch closed, for a full five minutes.”

In one of the capsize episodes, Braam’s trip nearly came to a scary end. As the boat rolled upside down, Braam and Wayne were spun from one side of the cabin to the other. Somewhere in the chaos Braam broke his rib. “Very difficult rowing for a week,” he remembered. “And I still feel the remnants of it a month-and-a-half later.”

While it’s not the first mega-endurance challenge Braam has undertaken—he previously ran all 2,610 miles of the Great Wall of China in a single push, and ran along the whole South African coastline—it may be the most challenging. Beyond the sleep deprivation and capsizing, other difficulties include maintaining morale amidst the “bland views of ocean, ocean, ocean;” procuring enough potable water with their emergency water pump after their higher-tech, more efficient one blew up after only a few days at sea; and avoiding the path of supertankers, which they have several times come perilously close to colliding with.

While the end of the trans-Atlantic voyage is in sight, Braam sees it as just the beginning of the DOT Challenge. He hopes the app reaches millions of individuals. And he’s already got his next crazy, endurance project lined up: In 2018, Braam and Peter van Kets will embark on a “15-month circumnavigation of the globe along the Tropic of Capricorn, using only non-motorised means.”

It’ll be a wild adventure, but if he can get enough people to start doing those “Silly, little, tiny, teeny, insignificant things that if millions of people do them—like the movie Pay it Forward—then we can change the world.”

Check back at The Outdoor Journal for updates on Braam and Wayne’s journey. To learn more about the DOT Challenge, visit the campaign’s website at www.thedotfoundation.org.