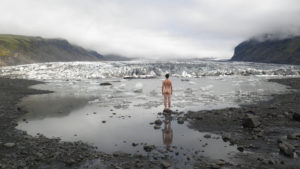 On their quest to show nature’s beauty, neither lingering tourists nor clothes were allowed in the frame.

“If we wanted to take the shot we had no other way than me getting nude in front of the family,” Tancredi Bernard Litta says as he recalls the beautiful spot in Skaftafell that he and his mate Sinan Bursa couldn’t refrain themselves from shooting on their Iceland adventure.

In the beginning of their two-week cycling journey, they decided that the physical challenge wasn’t enough. The two students had just bought a new camera and wanted to take photos in a natural way, capturing the incredible waterfalls, craters and traditional huts they came across, without other people disturbing the picture and adding one quite unique feature. Their naked bodies shot from behind.

Every time it was a bit of a hustle to sneak around and getting the best pic without showing any other people and just making it about the nature and us in the picture.

Even though only 300,000 people live in Iceland, the guys soon realized that they were far from the only tourists occupying its roads. With their backpacks stuffed with food, they had expected a deserted countryside. But finding gas stations to stock up on provision turned out to be easier than finding beautiful spots with no people around.

Jumping over wired fences to get to more remote places that most people wouldn’t visit or waiting for people to leave was not always enough. In Skaftafell National Park, they weren’t the only ones who stumbled upon the gorgeous farmers’ huts. The NP in the south of the country is a popular film location, featured in Games of Thrones, Batman Begins and Interstellar to name a few, and the opportunity to shoot the grass covered tiny houses on the slopes of a hill, was too good for the guys to give up. Despite a family picnicking close by.

“We had been waiting for so long that Tancredi was like, ‘Oh fuck it. Let’s just do it and get it over with so we can continue’”, says Sinan.

”It became a challenge to take the pictures in this natural way,” he says.

“And I don’t think they saw me, they were a few meters away,” Tancredi adds with a laugh.

However, giving a family a full frontal while facing away from the camera was not the goal.

But giving up was not an option for the young adventurers, “too keep on cycling was the same thing as keep on taking pics,” Sinan says.

Neither of them had a photography background, but their initial idea of creating a calendar for a friend quickly turned into a bigger project.

“It became like an obsession. We started seeing good shooting spots in every landscape,” Sinan says.

A gift turned into a nude album of us in Iceland.

They paid more attention to the details around them, looked at the landscape from a different perspective and discussed how to take better photos.

“We can see an evolution in the pictures from the beginning to the end when we understood better how to preside with it,” says Sinan.

It was not a walk in the park however. On Iceland’s winding roads, low degrees, hard winds and freezing rain was part of the deal.

“20 minutes would actually turn into 1,5 hours because of the rain and the wind that was coming towards us. It felt like it was below 0 degrees even though it was 12. So we were cycling, but standing still. Not moving because of the wind and little uphill,” Tancredi says.

Sinan adds: “When you cycle for 7 hours against the wind, it feels like you aren’t doing anything. You are let down. When you cycle 7 hours without the wind you are completely happy. It could be raining, it could be snowing. You don’t mind, because you’re giong forward. I had my shoes soaked and could hear the water when I did the spinns going tjotjotjo. And it wouldn’t bother me because I knew that the destination was close.”

When the weather was at its worst, Tancredi was running in and out of a nearby cave to take shelter from the strong winds. Sticking to the plan and “undressing ourselves where a normal person wouldn’t”, as Tancredi puts it, fell through on one ‘not so summery’ day however.

On their way to Dyrhólaey, the wind and rain was so terrible that Tancredi absolutely refused to get naked. It was his turn to strip, but despite the wonderful spot with a view over the lake, mountains and green hills, Sinan had to come through.

Tancredi has a ‘no’ and a ‘NO’. I had never heard that NO before. Like, ‘this is not possible’.

The terrible weather didn’t put them off planning upcoming kayaking, sailing and motor biking adventures around the world. Up next, you might see their naked backsides in Cuba, England, Vietnam or Croatia.