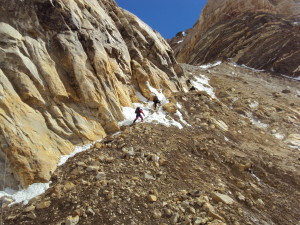 Surviving a snowstorm on Kamet, 7756m

A team of amateur climbers attempt Kamet in the Garhwal Himalaya in April 2010. What happens up there brings them face-to-face with the force of nature, leaving them struggling for their lives high up on the big mountain.

The sun shone brightly over the refulgent expanse of the glacier. From their sky high perches, Mana, Kamet and Abi Gamin looked down sternly on a few colourful dots, appearing to be moving very slowly. To the goddesses of the sky, they even seemed a little foolish in their self-assured intent to climb India’s third highest peak, the 7757m infamous Kamet. Notoriously high winds, fierce blizzards, and menacing altitude sickness tales were just a few characteristics of this high peak. However, blissfully oblivious to what lay ahead, the pursuers seemed to be enjoying the initial hurdles. The silence of the Garhwal Himalaya was frequently broken by their resounding laughter. As they extended their hands to pull out their fellow climbers stuck in knee deep or at places thigh deep snow, they didn’t seem to mind it much. Though it was a highly taxing task to tread in such deep snow, they were taking it sportively. At one instance, they even had to use the shovel to clear away snow to take out a stuck climber who being more than six feet tall and 85 kgs, couldn’t come out on his own or be pulled out.

Kamet had already tested them with precarious rock sections, round log bridges over streams, interminable moraine ridges, a small but formidable ice wall, a scary looking ice gully, and long tiring marches on snow. Now after a month long trudge, making a dangerous traverse and climbing a vertical snow slope, they were positioned at 6520m, a team of ten, hopeful of making the summit in next two days. Tomorrow Camp III and next day SUMMIT. With these pregnant thoughts they retired to their tents. Team 1 with the leader was already at Camp III and would attempt to summit tomorrow.

After summiting, Team 1 would come down while Team 2 would occupy the higher camp. That was the plan. However, next morning, they were instructed by leader not to come up and stay put at Camp II. The weather forecast wasn’t very encouraging and he was worried that Team 1 might have to hold overnight at Camp-III. This came as another hurdle and team II decided to take it headlong and proposed to climb straight to summit without stopping at Camp-III. “All the members are in excellent shape sir and wish to go for the summit” the acting leader of team II pleaded on the walkie talkie. However, the experienced leader was adamant. The day was spent listening to the conversation between the summit team and the leader on the handset. Some trouble was brewing up there, climbers were struggling with snow fall and by the time they reached summit, it was overcast. Nil visibility, only the altimeter watch could confirm the successful summit. Everybody held their breathes and prayed while the summiteers descended.

Evening brought a total devastation for Team II as the leader ordered to break camp and go down the next morning. The expedition was over. Weather was closing in. Thus heartbroken, at 6.30 p.m., Sunita, Akul and I got into one tent, while Menon, Jassi, Ali, Suresh, Deepika, a Sherpa and a HAP settled themselves in other tents. It was here that the malevolence of Kamet started to descend upon us in full force. She wasn’t satisfied only by denying us the summit, but a full display of her malignant nature was in store.

I felt a thumping pain in my head and apparently so did Sunita. Every half an hour either she or I kept asking each other what was the time. Time of course was at leisure, the entire long night. But it wasn’t only us grappling with the altitude. Menon came asking for Dexamethazone, for our HAP who was having trouble breathing. The night was a torture and the next morning I sat up with a groggy head to examine our breaths solidified into icicles, hanging from the tent roof.

By the time we got ready and emerged out of the tents, a fierce blizzard had already engulfed the camp site. Snow was being whirled up in the air, forcefully thrust in our faces and shivering figures. My cheeks almost burnt with cold. Fingers froze while tightening the strap of the crampons. High on the mountain, we were entrapped in a whirlwind of snow, the intensity of which was unimaginable to me. This however was just the beginning.

The campsite was approached immediately after a vertical climb, so now we had to first descend this section. I had barely taken a few steps, when my foot slipped. There was nothing I could do, but keep falling, going down the slope in a rapid slide. Luckily the fall was stopped by a knot in the rope. I gathered my wits and hauled myself up. Then came the traverse and all hell broke loose. It was hard enough to clutch the rope, balanced on only your toes and move sideways while fresh snow smacked your face, got into your nose and covered your goggles. Only a few feet ahead was visible, the rest was pure white. We might as well have been walking on the clouds. On top of that, one of my crampons came off! I slipped. And hung facing the mountain with my legs outstretched in the absolute void. Somewhere nearby,  a chunk of snow crashed thousands feet below with a resounding thud. Summoning all my strength, I swung my boots into the hard surface and hauled my own body weight plus the 10kg rucksack up. But it was nearly impossible to move more than two to three steps before falling again. Each time the carabiner attached to the rope held my limp body from plunging down and the entire process of gathering the last ounce of energy to come up had to be repeated. My fingers had lost sensation due to the cold and I couldn’t use my hands to hold the rope. Never before had I felt so exhausted. There was a strong urge to open my carabiner and let go. Death seemed so smooth and easier. Behind me Ali stood staring into oblivion.  When I asked him to pull and tighten the rope, he didn’t even blink. His mind had stopped registering. Slightly behind him, on the same rope hung Sunita, exactly in the same position as mine, due to the same reason. Somewhere behind her, Suresh, a Taikwando instructor, had given up. He had anchored himself and just sat under a rock. Ahead of me, the HAP had transformed into a snow ghost, his face, moustaches, the headgear, his clothes, the rucksack all covered with a thick white layer. Winds continued to blast the valley, pouring loads of snow from above. I remembered the stories of people frozen on the mountain sides. However the will to live was stronger than the urge to die. We kept moving by inches. Meanwhile Team 1 also descended and caught up with us. I could see horror in the leader’s eyes for the first time, when he saw us hanging on the rope. One of the Army Instructors who had trained me in Siachen, shouted encouragement at me and I seemed to receive a burst of energy. Later another instructor took off my rucksack and tied it to a piton, to be retrieved later. Relieved of the beast, I managed to make my way through.

At some distance we found Deepika crouched in a lee. She had sat still there for 45 minutes, not realizing that the lack of movement must have frozen her limbs. She now tottered forward but fainted slightly before the lower camp. Luckily the traverse was over and it was a downhill slope. She was carried by the same instructor Subedar Jeet Singh who had infused life in me. Thus after a nightmare of six hours, we stumbled into Camp-I, shivering, shaken to the core but alive. Thankfully, few members from Advance base camp had come up with some food and water. While some of my team mates were put on oxygen, my shivering continued for five hours. My fingers had chilblains and couldn’t even tear a morsel. It was a month before I could feel any sensation in them. The night was spent trying to feel the fingers, and putting on and off my gloves to keep the blood circulation going.

Next morning, the sun came up again, revealing the face of our mountain. We gave it one longing glance and headed down. We might have been rejected but it matured our perspective towards life. When you have had an intimate meeting with death, you appreciate the simplicity of life more.

Toolika Rani is an avid mountaineer and traveler and has done eight expeditions above 6000M, including Mt. Everest.  She enjoys spending time with nature and writing about it.