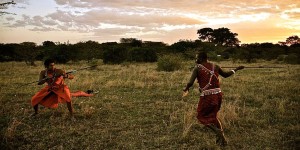 The Circle of Life in Maasai Mara

An adventurer spent the summer of 2013 in Maasai Mara in Kenya.

He befriended the tribals, learnt their ways, watched lions mate and witnessed The Great Wildebeest Migration.

In August 2013, I travelled to Nairobi, Kenya on invitation from a friend, Navraj. Navraj is a Kenyan of Indian origin and ardently promotes conservation efforts in Kenyan national parks. He encouraged me to go on a safari to the Maasai Mara national park, a large game reserve in the Narok county of Kenya, contiguous with Serengti National Park in Tanzania. August was apparently the best time to go to the Maasai Mara. It was right in the middle of the Great Wildebeest Migration. Around two million wildebeests migrate from Serengeti National Park in Tanzania to the Mara for fresh pastures. The migration is also considered to be one of the “New Seven Wonders of the World”. Navraj called it a moving food chain!

The name Maasai honors the Maasai people who are the ancestral descendants of the area.

There are two popular modes of transport to the Mara. One may drive from Nairobi to the Mara, which takes about 5-6 hours, or one may take a 45-minute flight from Nairobi in a twin-propeller turbo jet aircraft into the Mara Serena airport. I chose the latter.

The Mara Serena airport was dry, warm, and a landscape adorned by bushes and isolated acacia trees. Moses Sikona, in his splendid Maasai shuka (red cloth wrapped around the body), was already there waiting for me. ‘Jambo rafiki’, (hello friend) he said and continued speaking in fluent English. I learnt later that the English education in school has created several jobs for the Maasai people in the tourism industry.  He drove me to the Ilkeliani (young masai warrior) lodge where I was going to stay for the next three days. The lodge had tourists from all around the globe — African, Japanese, English, Australian, and Norwegian to name a few. Electricity in the lodge came primarily from an in-campus diesel generator while lamps in the rooms were powered using solar cells. Being clueless about what lay in store, I asked Moses what was the plan for the rest of the days. He asked me to get some food and take rest and prepare for what he called a game drive.

Moses picked me up the next morning for a game drive in his Jeep. A powerful four-wheel drive is often used for driving around the rough terrain of the Mara. Game drives usually start in the morning and last a whole day until sunset with a short lunch break.

Moses was my local guide and the driver. He knew the habitats of most animals and maintained cellular communication with his friends to stay up-to-date about animal sightings. Moses described the fauna of the Mara to me and drove to their natural habitats. Zebras and boars were the easiest to spot at this time of the year. The second most prevailing set of animals were antelopes, giraffes, elephants, hippos, lions, crocodiles and water buffaloes. Animals that were harder to spot were cheetahs, panthers, the relatively small cervix cat, and rhinos. The Mara is also home to a number of big birds. The griffon vultures have an imposing presence in the Mara, patiently and confidently waiting for their role in the food chain.

We drove all day with scores of other vehicles crossing our paths. To my surprise none of the animals attacked anyone when inside the vehicle.

At one point we saw a lion and a lioness mating in a bush. Several vehicles including our own stopped to watch. The couple was totally oblivious to its surroundings, placing our own societal taboos under philosophical scrutiny. I noticed a strong semblance to human courtship in their interaction.

Another interesting incident happened when we started following a herd of about four or five elephants. It looked like they belonged to one family. They trotted along elegantly in the backdrop of the splendid evening sun. Moses kept a close distance from the elephants despite them moving away from our Jeep. All of a sudden the largest male in the herd turned around and warned us. His gesture, although completely silent with a slight ruffle in the dry grass as he turned around, had a powerful message: “leave us alone or else.” Drawing a line on our foolish curiosity we left the elephant family in peace as they marched into the sunset.

Wildebeest crossing of the Mara river

The most celebrated event of the Mara is the wildebeest crossing of the Mara river. Wildebeests cross over from Serengeti national park in Tanzania to the Maasai Mara in Kenya for greener pastures. Hundreds of wildebeests simultaneously cross the Mara River. They typically have an initial sense of hesitation; collectively waiting for a climactic moment, and then a domino effect ensues when a large herd crosses the Mara River with great acceleration and consequently leading to some accidents. Wildebeests often jump on each other as they descend into the river. Sometimes they also serve as crocodile lunch in the grand scheme of things. The crossing is a spectacular sight often watched by people in hundreds of Jeeps and vans parked along the Mara river.

When the big picture is elusive the best you can do is get an aerial view of the Mara. I hopped onto a hot-air balloon at around 6 am one day. This was also my first time on a hot-air balloon, a unique experience on its own. You have a floating sensation as you move ahead with the wind and the landscape goes by underneath you. The balloon pilot first maintained a low altitude and slowly rose higher. We could see the global patterns of migration and into the private rooms of the elephants and water buffaloes without their consent! The hot air balloon ride ended with a savory champagne breakfast after about an hour’s flight. If you have the extra budget (about 450 USD) I would unequivocally recommend the balloon ride.

Visit to the Maasai village

I like making friends wherever I go and bonding with the people of the Mara was one of my priorities. Moses became a good friend during our game drives.

I met another very interesting Maasai warrior, Wilson. I call him warrior because he was dressed in a shuka, highly decorated with jewelry, and carrying a spear, and he also smelt like blood. He later explained to me that he drank cow’s blood mixed with milk for nourishment. Wilson became my guide to a local village. It wasn’t really far from the lodge so we went there by foot. Wilson took this opportunity to educate me about flora in Mara and their medicinal properties. He gave me a short course on throwing his spear, which is harder than it seems. I guess facing a lion was part of his accelerated learning curve.

We entered the village and were greeted by the village chief who was crowned with the hide of a lion that that he had claimed to have killed. Lion slaughter to uphold manhood is a practice deplored by everyone today. Yet, the Maasai claim that they do it to protect their cattle that gnaw away at the green pastures meant for the wildebeests. The cattle in turn are a source of milk and nourishment for the Maasai who have lived in the plains for centuries, essentially complicating the whole scenario for any kind of judgment.

The chief’s assistant has a blow horn made of the horn of a water buffalo. They gave Wilson and me their consent to enter the village and explore the lifestyle for a small tip.

As we entered the village a jumping contest was going on between the male Maasai warriors who were singing loud and jumping at the same time without touching the heels to the ground. I took part in the contest. Although I do quite a but of jumping around as a rower I felt that the Maasai were exceptionally good at jumping high and for long periods of time. They gave me a tour of their mud houses that were planned in a circular pattern in the village for temporary stay.

Maasai people are nomads and move around as resources diminish. I was given a small tutorial on how to make fire with a wooden stick and plate. An art that was impossible for me to replicate. We quit the Maasai village through a “boutique”, where tables were made of clay. The boutique sold ornaments, garments, and belts! Yes colorful belts made with beads. A souvenir I would recommend.

The Maasai Mara is naked and puts the entire circle of life in front of your eyes to perceive, process and ponder about. What I observed there was demystifying about man’s interaction with the wild. A view often contorted by movies we watch. The experience greatly magnified my empathy for the wild, the people close to the wild, and myself, a city boy, with a heartfelt dearth of connection to the “brutal” realities of nature.

Sagar Sen is a research scientist residing in Oslo, Norway. Living in India, Canada, France and now Norway has continually shaped him as an academic, sportsman, and a compassionate world citizen. He feels an intimate relationship with water and has been rowing for over ten years now (both on flatwater and the sea).