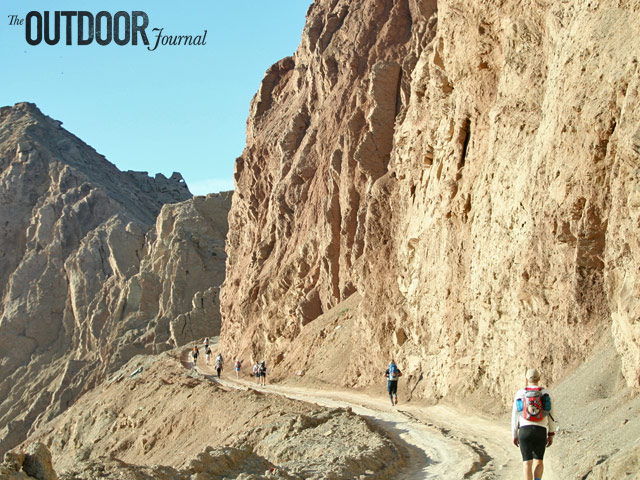 Two ex-army officers discuss the lure of their first ultra-marathon, a 240 km stretch across the constantly changing terrain of China’s Gobi Desert

The largest arid region in Asia- The Gobi desert- stretches across northern China and southern Mongolia. Located in the rain shadow of the Himalayas, the expansive land is dry and consists primarily of barren rock. The sharply bipolar climate reaches – 40°C in the winter and 50°C in the summer.

Manoj Verma and Arvind Sirohi are ex-army officers. Once a part of the Cavalry, the two also served with the Black Cats. They now run their own security company called Jaguar Security. In 2012, they ran The Gobi March; a race that stretches across the Gobi desert covering 250 kms in six days. It’s extreme, even when compared to other long distance footraces. Manoj and Arvind spoke about the trials and tribulations of the race and the preparation for it, in a country where it is difficult to get the gear, or the food or even the right terrain for practice.

I met Manoj first, because Arvind was outside smoking a cigarette. He arrived a few minutes later saying

“I’m hardly the kind of person you’d presume would go for a 250km run right?”

He’s not the skinniest of people and insisted, while ordering lemonade without sugar, that I had met him on the inaugural day of his diet.
The first point of conversation was how they trained on the Greater Noida Express way, which didn’t prepare them for the “constantly changing terrain” of the Gobi. “There are no pre-defined paths,” says Manoj,“You’re coming down a trail that has no marked out route.”

They were running on average 15-20 kms every weekday and 40 kms, ‘back to back’ on the weekends. The Gobi march is a fully self-sustained race and apart from water and a tent to sleep in at night, participants are not given much else. Except for the experience of having to decide what food and gear to take with them.
The long distance training was necessary for them to decide what type of food to pack, and how much of it.
They chose to take, “sachets of gel, which were 150 calories each and some salt capsules” to keep their salts and electrolytes balanced during the day. For dinner they had “freeze dried, low weight, high calorie, ‘expedition’ food.”
They got their food off eBay, and their gear from Hong Kong. RacingThePlanet has a “fabulously well equipped store there,” according to Arvind. Both joke about how much they enjoyed Hong Kong, which has “a huge running culture because of the expat population.” They had so much fun being tourists; they forgot they were there to buy gear until their third day in the country.
They took with them, amongst other things, packs with inbuilt hydration systems and sleeping bags that were cut in half to lessen their weight. “I threw away socks, chips and Maggie, and my mp3 player when it ran out of battery,” said Manoj.

“(We were) shedding something or the other everyday”

Arvind threw away his food on the third day. He says his body had started rejecting the sweet capsules and gels by then. “Luckily, some of the competitors who had dropped out by that time had other food with them, like beef jerky that my body wasn’t rejecting,” says Arvind.
The Gobi March has an understandably high drop out rate. Seven people of Indian origin took part, out of which only three managed to reach the finish line. Manoj and Arvind stayed in the race despite the problems they faced.
Manoj twisted his ankle on the fourth day. “It was swollen and I could only place it on the ground in a certain way, to avoid a shooting pain.” They were obviously prepared for blisters and minor injuries, “you have to know how to cut and drain a blister properly,” Manoj says, “but you can’t really prepare for a twisted ankle.”
This ultra was not easy, but both recall that their journey to the starting line was equally harrowing. “We were told that our Chinese visa had been rejected, days before we needed to travel,” says Manoj. They had to apply for an emergency tourist visa and were then faced with a delayed flight. By the time they arrived at Urumqi International in China, the rest of the group had already left for the start point. Manoj and Arvind reached at midnight, and had to wake up earlier than the rest to have their packs checked. They agree that the first day was the hardest, because of the 6 am start and the previous series of unfortunate events.
Both think that running ultras is a personal experience.

“We don’t really talk about it,” says Manoj, “my son and daughter probably don’t even know. They know I went to China, but that’s about it.”

Manoj has “run every marathon in the country” (according to Arvind) and was aiming to finish in the top fifteen of the Gobi March. “Which I couldn’t do,” he says.

Arvind’s goal was to finish the race and not drop out at any cost, “unless a doctor or God” told him too. He says he finds it difficult to explain ultra running to people, “you’re paying so much, screwing yourself for six days and taking time out from your business, but you’re also not getting any younger.”
Both ask for the person they call “The Master” to be mentioned. Jagdeep Kairon, who they consider to be the “pioneer” of ultra marathon running in the Indian Army. “He ran an ultra across the Sahara and inspired us,” says Manoj.
Their next ultra will be in Cambodia, where they’ll be running the country’s first ultra marathon race.

Describing the way a member of the Gobi team explained the lure of the ultra to him, Arvind says, “your life starts revolving around the event that’s happening – it’s all empowering, and the day it’s over you feel lost, like the affair has ended. So then you have to find someone else to have an affair with.”
Editor’s Note: Manoj completed the Atacama Crossing in March 2013 and he and Arvind are planning to join RacingThePlanet’s Roving Race in Iceland in August. Stay tuned for updates.
Image © www.racingtheplanet.com | Zandy Mangold
Place: New Delhi