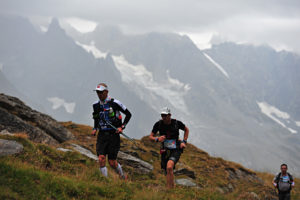 As one of the world’s most famous trail races kicks off in Chamonix, France this friday, The Outdoor Journal gives you an insight and a detailed coverage of the event

The North Face Ultra-Trail du Mont-Blanc enters its eleventh year in 2013 and has grown from being called ‘a tough race in Europe’ to ‘one of the most difficult foot races on earth’. Back in 2003 when it began, it had a total of 722 runners (of which only 67 finished) and has picked up in the past 11 years to reach an overwhelming 2,300 in this year’s edition. The unique factor of UTMB (as it’s also called) is that the runners traverse through three countries en route- France, Italy and Switzerland, a complete round trip of the Mont Blanc!
UTMB has it’s own justifications for being called one of the toughest races on earth- a total distance of 168 kms, running at a cumulative elevation of 9,600 mts (31,496 ft) and racing uphill and downhill- through rocky terrains and ridges. It has a cut-off time of just 46 hours, after which the race is closed. Pros and elite runners finish way before the alloted time. Trailers from around 75 countries take part, average age of a runner being 43yrs and who has a minimum of 7 qualification points (the 7 points have to be acquired with a maximum of 3 high endurance races under his/her belt).
With, surprisingly, ‘no prize money’ awarded to the winners, UTMB still attracts the adventurer runner. For Frenchman Gael Couturier, The Outdoor Journal’s Editorial Director, ‘finisher’ in four already, this would be his fifth UTMB. According to him, already in Chamonix today, “trail running is more about the purity of running in nature..as soon as you introduce money into this, it loses it’s essence. Fortunately for the race, since it’s so famous now, brands bring over their own runners from around the world and pay for their expenses. But this year, some great runners have kept themselves away from the run, including Kilian Jornet (Spain)- three time winner, Lizzie Hawker (UK)- five time winner, and also Americans Dakota Jones, Dylan Bowman and English Ellie Greenwood. Are they skipping the race because there’s no prize money? That’s the kind of talks doing rounds among top-notch athletes here in Chamonix!”
Gael added: “UTMB is one of the most famous and difficult races out there. Period! Being a finisher is in itself a great achievement. It means you’re tough. Weather and elevation gains are crazy here, a place where the phrase ‘never, ever, quit’ means a lot. It’s often weak temperament that forces runners to stop, not as much as their body, which is in pain for sure, but which can also probably take some more. It’s also a very beautiful race as this mountain is fascinating.”

The 2013 edition of The North Face Ultra-Trail du Mont-Blanc will kick off this Friday, August 30, from the center Chamonix, France at 16:30 hrs (local time). It shall witness 2,000 volunteers accompanying the 2,300 participants through the alpine terrain.
Equipment:
Go to their website here and check what’s compulsory and what’s advised.
Click here for more
Route:
It’s a complete loop around Mont Blanc, with runners crossing borders of three countries in the entire course. The route stays the same: Chamonix (France)- Col de Voza- Les Contamines- Croix du Bonhomme- Les Chapieux- Col de la Seigne- Mont Favre- Courmayeur (Italy)- Grand Col Ferret- Champex (Switzerland)- Trient- Vallorcine- and then back to Chamonix, France. Phew!
Looking back into the previous editions of UTMB, Spaniard Kilian Jornet (read more about him) won it 3 times (2008, 2009 & 2011) and has the second best time in UTMB (20h36), close behind Dachhiri Dawa Sherpa (who clocked 20h05 in 2003, the very first year of the race). Frenchman Francois D’Haene took 10h32 to win the 2012 edition.
Note: In 2010, the race was simply put to a stop. In 2011, however, it was a bit longer due to unfavourable weather conditions along the original route. Last year again, hostile weather conditions forced the organisers to shorten the route. We hope 2013 stays a ‘normal’ year as far as weather forecasts are concerned.
Aug 28
Petite Trotte à Léon aka PTL, an enlarged UTMB
By Gaël Couturier
‘Far from the beaten tracks’- say the web ads for the race. Looking at the happy and relaxed faces of runners slowly strolling their way to the start, it looks more like your average 10 km run. May be it’s the loaded backpacks that betrayed them or the excited voice of Catherine Poletti, the Race Director, giving them- the runners, their families, passers-by and journalists- a motivational speech.
A quick look at the figures and you can infer that this race is the most insane of them all, around the Mont-Blanc: 300 kilometers on a route that is different every year; a route that’s not way-marked but only mapped (GPS waypoints and maps supplied), with about 24,000mts (78,740 ft) of altitude and an absolute rule to be self-sufficient on anything, including water- yes, including water!
A Brazilian runner on my left is already itching for the race to begin but is already overawed by the grandeur of the event. You don’t decide to run or trek 300 kms non-stop with a maximum authorized time of 136 hours over the weekend. He could probably have spent months and months training, saving money for this trip, to a different part of the planet, to run one of the craziest of races. And there he was, at the starting line!
Someone once said, that being alive and in good health while at the starting point of an ultra, was good enough. The rest- the race in itself- was the cherry on the cake. For this South American trailer, this statement was certainly true.
Image © www.ultratrailmb.com