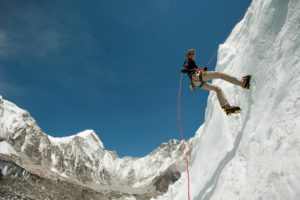 The Psychology of Summiting Everest

Being the first is important for many Everest aspirants, but unless you come from South Sudan, it is very hard to be the first of a nation. So what’s left?

For 14 years, Billi Bierling has been working for the Himalayan Database, alongside Elizabeth Hawley, talking to many mountaineers in the process. Billi is a hugely experienced Alpinist herself, and has reached five out of 14 of the highest peaks in the world, including Everest. Billi knows the Himalayas better than anyone, and is considered the authority on mountaineering in this region by The Outdoor Journal.

“A psychologist would have a field day here.”

These were my words when I was at Everest Base Camp, waiting to attempt the summit from the Nepal side in 2009. It was the same year the Japanese climber Nobukazu Kuriki, who sadly died on Everest this spring, embarked on the first of his eight attempts to reach the top of the world. I had just started getting into the world of high altitude climbing myself, but had already been working for Miss Elizabeth Hawley’s Himalayan Database for four years.

It has now been 14 years that I have been in the Himalayan mountaineering business collecting data about the climbs, and I have spoken to many 8,000m-aspirants, who have different reason to scale the high Himalayan peaks. Even though my time here has been relatively short compared to Miss Elizabeth Hawley’s, who had been interviewing teams for 53 years, I have realized that most of the Everest climbers are certainly no alpinists. Their motivation to reach the top of the world is often no longer the challenge to do a technical route but to reach the highest point in the world – no matter what or how.

What drives people to expose their bodies to the cold, extreme altitude or the danger of getting frostbite? What makes them want to hit the crowds, wait for hours in a queue to reach 8,848m, leave their families for the best part of two months and even risk their marriages and careers?

Summiting Everest, and mountain climbing is arduous and does not necessarily cause an adrenaline-infused thrill. In fact, previous research has shown that mountaineers have engaged in extreme risks to help reign in their emotions. Studies have found that mountaineers tend to fall short in the relationship department, have difficulties describing their feelings, and often feel a lack of control in their lives.

The mountains seem to provide them with what they seek and give them something else, namely fame and adoration.

According to the Himalayan Database, 4,830 people had reached the summit of Mount Everest by the end of 2017, and it looks very likely that an additional 550 to 650 people will have topped out this spring.

It’s not only Everest people aspire to climb, though. What was reserved for real climbers up to about 10 years ago has become a pastime for punters, namely scaling all 14 8,000m peaks which are scattered around Nepal, Pakistan and Tibet.

“A psychologist would have a field day here.”

The urge to achieve a record has increased significantly over the past decade, and simply climbing the highest mountain in the world no longer seems good enough for some of the aspirants. “Even 80-year-olds can make it,” one climber said to me referring to the Japanese climber Yuichiro Miura, who topped out at the proud age of 80 in 2013. Miura, however, was no novice to Everest as he was one of the first people to ski down its slopes in 1969 when he was a relative youngster of 36 years. His arch rival Min Bahadur Sherchan from Nepal tried to regain his former crown – at 76 he had become the oldest Everest summiteer in 2008 – by beating Mr Miura’s record several times. His last attempt to do so was in 2017, but the former British Gurkha died of a cardiac arrest when he arrived at base camp aged 85.

Being the first is important for many Everest aspirants, but unless you come from a country like South Sudan or the Yemen, it is very hard to be the first of a nation. So, what’s left? Chomolungma, the Tibetan name for Mount Everest, has already seen the first double amputee, the first blind person, the first handless person and the first diabetic. What about the first certified vet, the first vegan or the youngest person doing it in the fastest time? The list of potential firsts is long and it can be mind-boggling what people come up with.

Most expeditions usually descend on Mount Everest in spring, which is also the prime time for the media to scour the activities on its flanks, like hawks looking for their booty. The pressure on the punters rises to perform well and achieve what they said they would do. No matter whether it is to reach the summit without supplemental oxygen, a feat only 208 people have achieved so far, or to do a double whammy bagging Lhotse, the fourth highest mountain situated right next to Everest, within one or two days of reaching the top of the world. Climbing an 8,000m peak used to be a huge feat back in the days of Edmund Hillary, Reinhold Messner or Chris Bonington. With commercial operators charging an average of about 60,000 to 70,000 USD, clients feel that they have bought the summit expecting 100 per cent success.

They forget, however, that it is still a colossal mountain bearing many dangers and challenges despite the incredible infrastructure and hard work the climbing Sherpas put in preparing the route for them. Having said that, the success rate for summiting Everest rose to about 65 per cent in 2017 compared with a mere 24 per cent in 2000, which is mainly due to the better infrastructure, the better equipment and the fact that there are now around 60 fully qualified international mountain guides among the Sherpas and other ethnic groups, which certainly makes climbing Everest safer.

Looking at the recent success rate, the likelihood of reaching the summit is high, but what happens if you don’t make it on your first shot? Austrian climber Wilfried Studer for example thinks that he spent an accumulated full year at Everest base camp since he started attempting the mountain from the North side in Tibet in 1997.

For a whole decade, Wilfried and his wife Sylvia came every single spring to attempt the climb without the use of supplemental oxygen and Sherpa support, and every single spring they had to turn back due to the cold, strong winds, bad cough, exhaustion or the loss of equipment. They took a break in 2008 and 2009 but were back with a vengeance in 2010. Equipped with bottled oxygen, three Sherpas, a few friends and their daughter they reached the summit on 23 May 2010. Finally, they could put their minds to rest.

Only this spring season, Nobukazu Kuriki from Japan, who was on his eighth attempt to scale Everest without supplemental oxygen and Sherpa support, lost his life after taking a fall from the West face at around 7,500m. In 2012, he had already lost all but one finger trying to reach the summit via the technically difficult West Ridge. Kuriki was not one looking for the easy way.

He usually chose a different and more interesting route, organised his expeditions in the autumn as opposed to spring, and chose to climb without supplemental oxygen and Sherpa support. Had he joined a commercial expedition and followed the fixed ropes using bottled oxygen, he would have probably summited eight times, still in the possession of his fingers and – in the end – his life. But Kuriki was a loner, he was quiet and he liked doing his own thing. Sadly, this time the aspiration to do something amazing got the better of him.

For further information about Billi, please refer to her website at www.billibierling.com