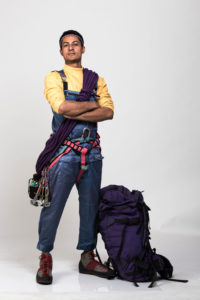 Then & Now: The Evolution of Outdoor Gear

The Outdoor Journal decided to raid their attics, storerooms, and basements to show how gear has changed over the years- from retro to metro. Who says the seventies didn’t have style? Check out this groovy ski onesie. Whether it’s alpine or Nordic skiing, it didn’t matter back in the day. Retro skiers wore oversized, brightly colored dungarees, fluorescent spandex, a whole lot of flannel, and sometimes, nothing at all.

“Long’s Peak”, pictured above, is a Hong Kong-based brand from the 80’s that doesn’t even exist anymore. Fluffy, oversized, and warm, it did the job. Established in 1979, Nikko Sport is a combination of Japanese tradition, aesthetics, and technology. One of Asia’s pioneers in outdoor equipment, pictured above are the old school ski gloves. An outdoor clothing and equipment manufacturer headquartered in the UK, Berghaus was founded in 1966 by climbers and mountaineers Peter Lockey and Gordon Davison. Pictured above are the brightly colored (apparently a prerequisite for all equipment manufactured pre-21st century) Berghaus gaiters.

Canada Goose Men’s Ridge Shell Jacket: Best known for being the de-facto parka for South Pole explorers and scientists, Canada Goose products come with a lifetime warranty. The Ridge Shell is a hip-length, waterproof and breathable jacket with a 3-way adjustable hood.

Patagonia Men’s Snowshot Freeride Pants: Fully featured and focused on utility, these H2No® Performance Standard 2-layer shell pants have an articulated fit for freedom of movement and a smooth mesh liner for comfort and ease of layering. In the 1970’s, few pockets of climbers who were passionate about the sport, would strap on their colorful harnesses, which looked like they belonged at Woodstock, recruit their buddies, and climb a peak. They were the pioneers; the hipsters, the innovators, and they didn’t even know it. The adventurists of the 70’s are always viewed in awe- for being daring and adventurous, with limited means and awareness. Here, their climbing gear illustrates just that.

Created in the mid-1970’s by cave explorer Ferdinand Petzl, their climbing equipment has come a long way since the old-school, brightly colored harness pictured above. Founded in 1975, Boreal specializes in climbing and mountaineering shoes. Pictured above are Boreals’ big wall shoes, launched in 1984- the “Boreal Fire”. Founded in 1972 by research chemist, Paul Howcroft, Rohan is an outdoor clothing and footwear supplier. Pictured above is their first product- quick drying mountaineering salopettes. Founded and based in England following WW2 by Charles Parsons, and originally called the Karrimor Bag company, it made its reputation in the 60’s and 70’s. Pictured above is the retro Karrimor supercool climbing rucksack. Lowe Alpine Grid Pull-On: Made of ‘Aleutian fleece’, Lowe Alpine’s proprietary extra-durable and stretchy polyester fleece fabric, the Grid pull-on can be worn as a base layer next to skin, or as a simple mid-layer depending on the weather conditions.

[Check out Lowe Alpine products in India on Trekkit. A young company based in India, Trekkit empowers enthusiasts with state of the art outdoor equipment, with high-quality brands like Lowe Alpine, Rab, Craghoppers, amongst others.]

Petzl Sirocco: The world’s lightest climbing helmet is such a featherweight that you won’t even notice it’s on your head. At a ridiculously light 168 gms, it’s got headlamp clips, a one-handed magnetic buckle, and visor attachment points.

La Sportiva Katana: La Sportiva’s Katana is a slightly LA extreme and stiffer version of the ever-popular Muiras. They fit the feet better, but are cambered and advanced enough to climb hard routes, yet be manageable for multi-pitch trad.

Metolius Safe Tech All-Round Harness: The Safe Tech harness lineup has two belay loops, both as a backup to the most crucial part of your harness, and to make rappels and belays easier. The brand also has a unique adjustment system.

Black Diamond ATC Guide: The Guide version of this belay device has that extra hole for the leader to use it in auto-blocking mode for one or two followers on a multi-pitch trad climb. It’s also burly and durable, and has those v-notches for added friction.

Omega PacificLink Cam: A revolutionary camming device from this US company, the Link Cam extends the range of one unit by nearly three times thanks to its single-axle trisected lobe with a camming ratio of 2.5:1.

This Gear Section was originally published in Issue 06 of The Outdoor Journal.