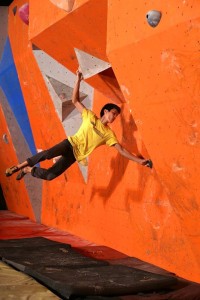 After Ultra Trail Mount Fuji
(April 26, 2013 – April 28, 2013 – 3 days), we talked with our friends, female winner Krissy Moehl and second place Julien Chorier.
Here’s what they had to say about this great new race

TOJ: What are the main difficulties of this Japanese race when you are a foreigner?
Krissy Moehl: Whether you are a foreigner or a local, the UTMF poses plenty of challenges. The course boasts somewhere around 28,000 ft of elevation gain and the terrain in Japan makes each of those climbs and descents very present and in your face. There were long sections of runnable dirt roads as well that wear you out and significant sections of intense climbing and descending that do a great job of punishing your quads. The race is relatively early in the season, and I found it challenging to be ready for 100 miles by the end of April…especially these 100 miles.
Julien Chorier: This race has the same codes and structure as UTMB in Chamonix (France), so it’s not a big change for me because I’m used to the one in France. I even won here last year. The hardest thing is to get yourself understood by the local people. After an aid station I’ll ask for the right route to follow and out of the 50 people watching me run at this time, no one is able to provide me with a correct answer for the right direction. The second problem I face (this one has nothing to do with being a foreigner!) is that a lot of those trails are private and so far the race direction does not have the right to let us run on it and that’s why, unfortunately, there’s still a lot of roads in this race.
TOJ: What are the similarities and differences with UTMB Chamonix?
Krissy Moehl: Both are challenging courses, well organized events and greatly supported by local runners and community making the run-around an amazing experience. In addition to the differences in terrain (UTMB Alps vs UTMF Fuji surrounding peaks), I felt there was a significantly greater amount of running in the UTMF course and the climbs were more focused and concentrated, whereas the UTMB climbs come at you throughout the race.  The differences are found in on the differences in culture.  The food choices are the most significant differences.  I loved all of the noodles provided on the course and may just take these noodles back as a part of my upcoming race and adventuring calorie sources.
Julien Chorier: It’s the same distance, around 100 miles. Also, regarding the gear regulation, it’s pretty similar to what we had at UTMB a few years back. The number of aid stations and the way the route is marked is pretty similar. The only thing that I can think of is that at the aid stations, you have noodles and rice instead of cheese and ham!

Image © Krissy Moehl
TOJ: What do you think of the level of Asian runners, were you surprised?
Krissy Moehl: When I was in Japan at previous races I was very impressed with their ability quickly to run downhill. Their quick feet and negotiation of the technical trails was something I wanted to learn.  I still have the same respect for their running ability, especially on the downhill.
Julien Chorier: The Asian runners, especially the Japanese, are really good. Since Tsuyoshi Kaburaki has brought up great footage from our UTMB race, trail running has become much more popular here. Last year, I was really impressed by the number of pro runners here in Japan. This year, the result of the race shows that trail running has become a huge trend here. For example, Hara Yoshikazu, the winner this year, is a pure road runner with great performance on 100 km on road (pavement). He’s clearly among the best in the world but he chooses to run trails now. He will be running UTMB this year at the end of August.
TOJ: How to recover from a big race like that, physically but also mentally?
Krissy Moehl: The recovery from this race is going to be a bit of a process.  I knew when I was running the race that I was “going to the well” and taking out more than I was prepared for.  It is an amazing experience to go further than what feels like your limit, but it also means that the recovery is going to take a bit longer. The first week after the race my body was sore, but I could feel improvements every day.  Having to travel back to the states and add jet lag to the recovery process is a bit of a speed bump, but I am nearly through that piece. Now, even though the soreness is gone, I notice that my energy is still a bit low. I need a lot of sleep and if I go do any workout I notice muscle soreness that I normally would not experience from the same workout pre 100 mile race.  Everyday gets a little better, but I need to acknowledge the time this is going to take.
Julien Chorier: Physically speaking it’s not too hard for me because I train a lot. After 2-3 days, I was able to run again, slowly. Mentally, it’s not that easy especially when, looking back, you feel like you could have done a better job at it. But, that’s life and now I have to focus on the next races I’ve got.

TOJ: Who are the 4-5 ultra runner girls around the world who impress you these days (apart from yourself ;-)?
Krissy Moehl: There are MANY more than 4-5 ultrarunner girls that impress me.  I think the world of all the women that are out there exploring and pushing their limits.  Names that stand out in my mind are Lizzy Hawker (fierce competitor and genuine person that I hope to adventure with someday), Darcy Africa (friend and training partner in Boulder and for her racing over the years amidst “life” especially last year with her 2012 Rocky Mountain Slam), Meghan Arbogast (for her amazing performances over the years and continued perseverance through life and age), Ann Trason (legend in the sport, I only witnessed her last few years of racing, but her resume inspires forever), Devon Yanko (close friend, speedster, making her life around her passions), Nikki Kimball (undefeated on US soil for her first 8 years of ultraracing and still is highly competitive in the sport), Kami Semick, Anna Frost, Emily Fosberg, Rory Bosio and many many more.
Julien Chorier: It’s hard to select only a few of those runners but right now, I’d say that Sage Canaday, Timothy Olson, Hara Yoshikazu are the fittest guys, with Kilian Jornet of course as the kid’s always super fit and on top of his game. Some of my French mates are also in great shape, like François d’Haene from Salomon and Sébastien Chaigneau from the North Face.