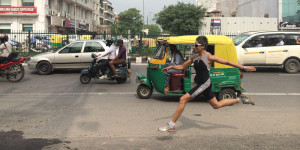 In the third post of our Ironman blog series, Vasu talks about the running part of her training; her various encounters while running on Delhi roads, her gear and her motley playlist.

I have a confession to make: I have never run a full marathon, and I’ll be doing it as the final rung of my Ironman-distance triathlon, after a 3.8 km swim and a 180 km bike ride. Crazy, huh?

I used to love running as a child.  Ended up coming first in most school and inter-school athletic competitions.  Gave up running during college and 17 years in the US, picked it up again after that.  I’d forgotten how much I love running.  And it kicks my behind.

I am scheduled to run four times a week, once a week run for two hours, and every other time, up to 45 minutes, clubbed with swimming or cycling.  I generally run 10-11 kmph, although in actual race conditions, my pace comes down to about 7.1 kmph, since it’s my first time doing the Ironman distance, and I work with Zones 1 and 2 of my Heart Rate Monitor.

Living in Delhi’s pollution and traffic, there are few choices on running.  Safety-wise, the best thing to do is to run in an air-conditioned gym on the treadmill.  I cannot run on treadmills to save my life.  I can’t run around in circles, sensibly, like in or around a giant park; I never did have much sense about me.  I have to get from point A to point B.  And I get depressed when point B is on top of point A, as on a treadmill.

I generally take off on the roads of Delhi, running on the roads with traffic.  To me, distance is a sense of achievement.  It’s fun to set a visitation goal – like run to my grandmother’s house, or run to some aunty’s house across town – from East Delhi to South Delhi.  Once my mother took off from home in a three-wheeler scooter to her friend in East of Kailash in South Delhi. It is a distance of about 15 km. She overtook me at the Delhi Zoo, and told the scooterwala(driver of the scooter),“That’s my daughter!’ Then asked me, ‘do you want to hop in?”  I said, no.  The scooterwala was amazed.  He said, “Where is didi (elder sister)going?’  Ma told him I was going where they were going.  He said, ‘she is going to RUN all the way?”  Ma said yup, and she also bikes and swims. Closer to aunty’s home, I forgot what turn to take, and the scooterwala rushed to my aid, ‘Didi, this way!  This way!!’ For a man who has never met a woman running the streets of Delhi, he was SO proud!  About 10 months later, ma took a scooter to visit her friend again.  The scooterwala asked her, “Aunty, how is didi?  Does she still run?”  Ma was stunned.  It was the same scooterwala, and he remembered my mother by my running.

Or, if I am not carrying my water and electrol around my waist, I keep it in my car, and run past my car every so often.  I prefer running on roads also since tar is softer than the hard rock of paths in parks.  Waiting for people who are walking, or running around the parks in narrow paths seems too congested to me.  Despite hoots, jeers, honks, I am part of the Delhi traffic, and take up space, and give them a piece of my mind.  Every time I run, it’s an exercise for Indian men to respect women. Tricky in Delhi where pedestrians and runners have no right of way.

Recently I had an incredible experience running.  Generally when Delhi men see me running, they place themselves in my path to obstruct me and interact with me disruptively.  I was running on the roads as usual, and this street sweeper stepped clear four feet away, held his broom in his left hand vertically, and gave me a military salute, broom and all!  I was flabbergasted – how did a street sweeper know to honor a female runner, and so formally?

I’ve got pretty wide feet, and while the Nike Flyknit Lunar has been recommended for me, I find the Nike Vomero works better for me.  I do get blood blisters when I run past 12 km, but oh well. I tried the Vibrams too, and fell absolutely in love with them.  They force you to run so straight, you even get a six pack from running in them. You do have to amp up the distance gently, very liable for injury if you don’t.  I can run up to 10 km in them now.

Long distance runners get introduced to friction very quickly; ignore it at your peril.  After my Delhi half marathon, I discovered blisters on my chest caused by my sports bra, about an inch long, about 1 cm high caused by friction.  Have taken to putting band aids on my chest before running.  Also lubricant just below underarms to prevent chafing.

I run in loose shorts and my favourite Patagonia sleeveless T shirt.  During triathlons, I run in my Orca trisuit.  Have to be very careful of the zip that comes up to my chest, since it cuts my chest and makes it bleed.  Each has its advantages and disadvantages – the trisuit makes me feel fast, though compromises on air circulation some. On the streets of Delhi, a trisuit is not recommended for women since it attracts far too many lewd stares and attention.

If I take off running from point A to point B, I carry my water on my hip belt.  It’s also fun to stop for sugarcane juice, or beljuice when in season.

Also, I discovered running without my sunglasses causes an inordinate amount of stress to my eyes and impacts performance.

After a particularly dogged injury, I was introduced to Trigger Point Therapy by my superstar physiotherapist, Gagan Arora.  I’d scream like a banshee, but the knots in my legs would be rolled out enough to enable me to run the next day.

Okay, so I have a dirty little secret.  I listen to Sufi music and opera while running.  I start off with a Bollywood playlist – Hookah Bar, Bavra man dekhneychalaeksapna, Iktara -then I go on to the Running playlist WakaWaka, Cheb – I – Sabbah’s mixes and The Three Tenors.  I use the first list to play around, do light running, and by the time I arrive at the running playlist – about 30 minutes in, I pretend I am beginning my running.  My running playlist has a wonderful cadence to it, and establishes a rhythm for my feet.  It also has I get knocked down, but I get up again and Nessun Dorma by Luciano Pavarotti, which are so inspiring when my spirits are flagging, and lend a skip to my step.  I really get into my zone with these.

I am really not that great at running.  The greatest thing I have going for me is that I keep at it.

About Vasu Primlani: Vasu Primlani is a standup comedian, host, corporate trainer, triathlete, and a highly celebrated environmentalist. She teaches sustainability in business schools, and teaches rock climbing. She will be participating in her first full Ironman in September of this year.