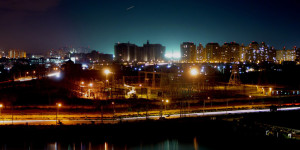 Training in India for Ironman triathlons is tough, not impossible

Despite chaos, pollution, uneven roads and overcrowded pools, Indian triathletes are training hard for the much awaited Ironman races this year.

Most rise early, bike on (almost) empty highways, run on hot tarmac and swim wherever they can.

Some triathletes living in a metropolitan city have it all: empty Olympic size pools with lanes dedicated to serious swimmers, well-paved roads with right-of-way for cyclists, empty pockets for running, green surroundings and above all, clean air. But some just don’t. Cities in India have a different story to tell. Apart from overpopulation, this country with a billion plus people has some of the most polluted cities in the world. Indian roads are also haphazard, of a patchy quality. There are lanes, sure, but there is no concept of lane driving. People often find themselves dunked inside open potholes. Stray cattle amble about alongside SUVs and lorries. Also, if you happen to be an athlete training for a triathlon in India, be prepared to be stared at.

Despite these issues, India saw its first Ironman finisher in Anu Vaidyanathan in 2006 at Subaru Ironman Canada, and its youngest Ironman finisher in Nishit Biniwale (21) in 2013 at Ironman Austria. This year there are several brave hearts dotted across the country, working hard for one of the toughestone-day endurance races on the planet, the Ironman triathlon: 4 km swim, 180 km bicycle ride and 42.195 km run to be completed within 17 hours.The Outdoor Journal caught up with some of them.

This Frenchman residing in India’s capital city in north India is training for his ninth Ironman slated for September 27 in Langkawi, Malaysia. The tropical city has been home to Ironman races since 2003. It went through a few years without the race but is back in action this year. It is also believed to be one of the toughest regions for the endurance event, mainly because of high temperatures and humidity.

Gaël is receiving training with an online coach based in southern France, Frédéric Sultana from WTS. Having trained in Paris and south of France for all his previous Ironman races, Gaël finds it much harder to train in Delhi. For one, the city is one of the most polluted in the world. Second, the population (Delhi was recently declared as the second most populous city in the world, with over 25 million people). Gael cycles indoors in a gym, because “I’m scared of getting hit and dying here!” He doesn’t mind running in the heat though. “I just love the heat,’ says our ultra-runner, who’s a five time finisher of the insane Marathon Des Sables in Morocco. Temperatures in Delhi soared to 48 degrees celsius this summer in June.

Gaël’s tip: Train hard, race easy. The more you train in tough conditions, the more you build on mental strength. You will find it an easy race on the main day. It is that simple.

This 25 year old adventure entrepreneur from Gurgaon (a busy financial and industrial centre in north India) will be doing his first Ironman in Kalmar, Sweden on August 16. The running and cycling course in Kalmar is mostly flat, with mild temperatures making it a relatively easier terrain for first-timers. Saurabh was enthused by the idea of learning three different sports simultaneously. A long distance runner, he started his training a year ago. He gradually increased the intensity of training, and for the past month has focused on it full-time.

His day begins at 4 AM and training goes on till 11 AM. He does a combination of swim+cycle and swim+run on alternate days. On Sundays, he wakes up at 1:30 AM and covers 160 km cycling on the national highway. “This is the best accessible road for a smooth, long-distance ride,’ he says, ‘the road is empty at the time, except for the occasional trailers and trucks, but you quickly learn to dodge them.” He says that training for such long hours early morning will help him adapt to the schedule on the main race day, when triathletes are required to wake up at 5 AM for the race that usually starts at 7 AM.

Saurabh’s tip: Adapt to your environment. The national and sometimes state highways are the best roads to cycle on. One needs to find a time when they are not crowded, and that is mostly between 1 and 8 AM. And then one needs to adjust his/her daily routine around the training time. It isn’t easy, but it is worth it.

Nagaraj will be participating in his second Ironman on August 24 in Louiseville, Kentucky, USA. This Bluegrass region has been a host to Ironman races since 2007. Bengaluru, a cosmopolitan metropolis in southern India is renowned for its continuous traffic on roads. Its high population density makes life tough for athletes. Born and brought up in the city, Nagaraj, who has a full-time job in an automotive firm, wants to use the Ironman training to improve his technique in the three disciplines. He trains early morning from 5 to 7 AM, goes to office, and resumes his training after work 7PM onwards. He runs in a park in the heart of the city “when it is relatively empty”. Also, Bengaluru experiences pleasant, mild weather throughout the year. This makes running and cycling on the state highway a rather enjoyable experience. “We also have a number of marathons and half-marathons the whole year round, which gives me plenty of training.” To train for the aqua part of the Ironman challenge, he swims in pools, which remain crowded, “but you have to work with what you have,” says the triathlete.

Nagaraj’s tip: Experience racing before. Apart from regular training, participating in marathons, half-marathons and short triathlons is a great way to simulate for the real race day. And you get to meet like-minded people this way.

The Pune based fitness enthusiast will be attempting his first Ironman in the picturesque city of Zurich, Switzerland this July 27. Zurich has played host to Ironman races since the 1990s. Nikhil feels that most Indian cities are insensitive towards triathletes. “When people are in their vehicles, something takes over their attitude. They are utterly indifferent to cyclists and pedestrians,” he says. Interestingly, crowded swimming pools are not a problem for this businessman. “At the Ironman, you are required to swim in open water with scores of people around you, so swimming in crowds is actually excellent training!” Nikhil is also receiving training under an online coach based in Colorado. “Since this is my first time at the Ironman, I wanted to pursue it in a structured manner under expert guidance.” He couldn’t find good enough coaches in the country, hence decided to “gamble with an online coach.” It worked brilliantly for him, and he is all set for the big day.

Nikhil’s tip: Embrace the fight early in your training. Crowded swimming pools are actually a boon. Online coaches can be pretty awesome.

The automotive engineer will attempt his first Ironman this September 27, also in sweltering Langkawi, Malaysia. Giridhar plans to run the required 42.2 km barefoot. “If I succeed, I will be India’s only Barefoot Ironman,” he claims. He runs barefoot around his neighbourhood in the outskirts of Bengaluru. Since there are no parks nearby, he runs on roads, on the hard tarmac. For swimming, he goes to a corporation pool on weekdays. The nearest and the biggest is 28km away from his residence. On weekends the 31 year-old covers 160 km cycling on the state highway, reaches Mysore (a city close Bengaluru) and swims in an open lake in the city. An avid cyclist, he was introduced to the Ironman last year. “The actual Ironman is just like an icing on the cake,’ he told TOJ in an email. ‘For me the real hard work is in the training that goes to it, at least six months of waking up minimum five days a week and deciding to go out and sweat it out. Testing your limits and pushing it a little further each time, irrespective of what the weather looks like, cutting down on friends’ time, family time, all the fun and parties.

Giridhar’s tip: Dedication. Even if the whole world is burning down, you go out and train. That is what it takes to finish an Ironman.