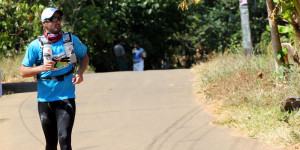 An Indian ultra runner understands the rigor of international athletes during a demanding race in Kerala, south India, last January.

This race made me realize how passionate one becomes towards running, when every single day is a new day to challenge yourself. You live for the day and the past is history. This is where I felt the love for running.

By Harshveer Saluja from New Delhi

The Ultra India Run is a semi self-supported race where the runners have to carry compulsory equipment, first aid kit, food for the day and water during the run on them. The weight of the bag is usually between 3-4 kgs. Having run ultras before the distance didn’t haunt me much but the fact that I could consume limited food was something I could not decipher. Being a semi self-support race, I was only supposed to consume the food i was carrying as the aid stations provided only water.

As the race day grew nearer I went on a shopping spree. The nutrition chart on the every single food item that I wanted for the race was my bible. I was looking for food with the least weight and most calories. We had to carry a minimum of 2000 calories for a day. On a normal day I easily consume 3000 calories but I decided to try living on a 2000 calorie diet and managed to get race food accordingly.

Ultra running is not a well-known sport in India yet, so getting endurance food –  high calorie food that is easy to cook – is a major problem. Anyway, with the best I could find, I headed to the start point of the race in the scenic hill station of Munnar.

During dinner I met Vincente Juan Garcia Beneito (the only ultra runner to have won all the 4Deserts Races), Australian Joe McCann (a man of many ultras) and two septuagenarians. It felt good to be the only Indian among a total of 9 participants. With time I got to know about how experienced these runners were, and the grand feats they had all achieved in life. I felt grateful to be in their company and hoped my journey would be fun running with them and a learning period.

Day 1 – First taste of the race

From Munnar to Rajakaddu (Length: 37km)

The first day is usually to ease into the run. I wasn’t pushing myself too hard. It got hard by 11 am itself. The downhill during the first day was absolutely killing. I have never run such steep downhill for so long and was super happy to reach the first checkpoint at 15km because that’s where the downhill run stopped. The day went by pretty quick as the distance reduced.

The first night in the tent was a sleepless. It was tough adjusting on the tent floor. Even the faintest noise would wake me up.

I knew day 2 would be interesting. After having consumed just 2100 calories the previous day I waited to see how my body was reacting. After waking up I made myself some oats and ate my granola bar. I was eating the right amount of food, as I knew I didn’t have anything extra with me. My muscles were sore but they seemed to be in good shape. But I did feel that I needed more calories in my body. As the run started with the other participants entering the wilderness of Kerala, I surely didn’t know what was in store for me. Getting to Upputhode has easily been the toughest marathon I have ever run. The steepest uphills, sun burning any uncovered skin and a body craving food, this was now becoming a fight with the mind to keep taking a step forward. I remember I walked the last 10km to the finish line. It was the longest day during this race and the distance was done.

We usually got into the tent as soon as it was dark and wanted to be sleep 11 hours, trying to recover. But every time I woke up during the night, I would tighten my quadriceps to feel the soreness.

Woke up like a prisoner of war who had been tortured. I had decided that at the end of the day I will get my hands on any food that could be an additional source of carbohydrates and proteins. Clearly, the food I had was just not enough. It was an equally difficult and long day. But I was determined to keep chugging one step at a time.

I managed to eat a decent meal of rice and boiled eggs at a local store on arriving at the camp on Day 3. Needless to say, I felt stronger. My muscles had recovered and my mind was happier. As the run started and I got into my rhythm. I found my pace similar to that of Kazuko – a 60-year-old Japanese runner.

Kazuko is a woman with a petite figure. At first glance, you would never think of her as an ultra-runner. After spending some time with her and noticing her style of running, I knew she was mentally an IronMan. As a person, she is the most humble, innocent and sweet woman I have ever come across.

I asked her if I could be her shadow for the day and try to keep up with her. I managed to do so till 33km and I noticed that we had covered the distance fairly quick. It was the most enjoyable day for me, as usually running with someone is not easy if you train alone and have spent most of the race days alone. I walked the last 5 km as Kazuko trotted to the finish line.

At the camp I managed to get some more eggs and the legendary poronthas (flat Indian bread). I knew Day 5 would be good.

Day 5 – The love of running

From Kattaparna to Kumily (Length: 45km)

The longest distance still lay ahead. But I was pretty happy that I would get to have a clean shower and the delicacies of the region….fish, prawns, beef and the poronthas.

I had a lousy night as I couldn’t sleep at all due to the uneven surface. After having spent 11 hours in the tent, the first 15 mins of the day were absolutely hazy for me. I couldn’t see well or understand anything. After getting into my race gear and packing my bags, I stood still in the shadow listening to my iPod whereas all the runners were near the starting line stretching and reminiscing the last 4 days. I didn’t have a positive outlook for the day and I decided to stop thinking about it to enjoy the music. The countdown took place and off we went. A few kilometers into the run, I asked Kazuko if I could be her shadow again. A few more kilometers I asked her if I could go ahead. And then there was no turning back. Something got into me. There was a lot of energy coming in from various thoughts. The Mumbai marathon was happening the same day. It is my favourite running event in the country, and the first time I participated in it, I promised to never miss it. But here I was, doing a run in Kerala instead, and missing out on Mumbai. The thought that crossed my mind was this – ‘If I was running the Mumbai marathon, I would give it all. Since, I am here I must give it all and make it worth it.’ This thought along with a track by Swedish House Mafia in my earphones, the cheering crowd took me through the finish line. Day 5 was my fastest day in the entire race. It couldn’t have been better.

Erhard Weiss, the 63-year-old German is a legend among amateur ultra runners. He was running the Ultra India Race. Name the toughest races on the planet and the man has done them all. When he finished the Ultra India Race, he was in tears. Looking at him my eyes were moist too. As I write this, the lyrics of the song playing is – ‘One day baby we’ll be old, think of all the stories we could have told.’ I hope to have many more stories and never find the answer.

The author, Harshveer Saluja, 24, is one of India’s youngest ultra runners. He has run the Bhatti Lakes Ultra in 2012, the 63 k Gurgaon Marathon in Haryana, India, was selected for the impossible2possible youth expedition, a 270k ultra marathon through India’s That Desert in 2011. He now plans to participate in Zendurance, a 100 k run in Ladakh in July 2014 among other races.