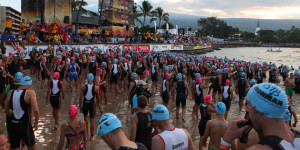 Want to race the Ironman World Championship in Hawaii this October? Think again.

The WTC’s Ironman World Championship takes place every year in October, in Hawaii.

To compete in Hawaii, it is first necessary to qualify by placing in another WTC sanctioned Ironman competition. There are around 20 each year, all over the World.

Earning a spot in the Ironman comes at quite a price considering the discipline’s large number of passionate devotees. While it is clearly difficult to qualify, the Ironman is not reserved solely for professional athletes. Several world champ titles are awarded to a variety of age groupings.

TOJ: What does it take to qualify for the Hawaii Ironman? Can anyone who hopes to participate make it there one day?

FS: The Hawaii Ironman is a World Championship. To qualify you have to perform, because the competition is present no matter your age group. Performance in the Ironman is multifaceted due to the several types of racing involved. It’s a very long test of endurance. Since each individual athlete is different, it is impossible to arrive at a generic formula for how to qualify. However, it is certain that no one delivers the necessary performance without long training sessions in all three sports. One must commit to at least four months of training peaking in 30 hours of practice per week. This type of preparation is not without consequence in the personal and professional lives of those training. Qualifying for the Ironman is a project that requires placing oneself in a set of favorable conditions that are difficult to bring together and success is never guaranteed. Several attempts will sometimes be necessary.

Every Ironman hopeful should start by training as it is difficult to evaluate one’s potential and possibility for progression before having tried it. Since the Ironman accounts for age, it is possible to envision a long term strategy and to see one’s efforts to maintain a long-lasting level of fitness pay off.

TOJ: What did you do to qualify last year? How did you train?

FS: Getting to the race in Hawaii is no easy task. First of all, the races where you can qualify are all over the globe. I chose the simplest route to qualification : The Nice Ironman. This race was the closest and I had already participated in the 2008 edition. It’s important to know the specifics of each course in order to prepare, but also to pace oneself. I focused on the end of the race in my preparation for Hawaii, by working to tire myself to the point of exhaustion. To achieve this goal, I opted for micro cycles of long sessions during 2-3 days, followed by 1-2 days of rest, adding up to roughly 2 micro cycles per week. The lure of the Ironman and fear of underperformance fueled the intensity of my workouts. The particulars of my bike and swim micro cycles depended on the weather and how I was feeling. Aside from this specific type of workout, I also made sure to include strength and speed exercises in all of my training activities.

TOJ: Does the Hawaii Ironman still embody the ‘dream come true’ for a triathlete and why?

FS: I think this race does still represent the realization of a triathlete’s dream because it takes the best effort one has to give in order to finish. Having to go through a difficult selection process is an additional source of motivation, because it is a real chance at a jumping off point. This race continually pushes one past both the physical and mental limit. In Hawaii one wants to achieve a “personal best” not only to live up to being selected, but to see the fruition of all one’s preparation as well. One has to reach deep down inside for the strength to accomplish all of this. Rising to such a challenge results in equal parts humility and self-esteem. The humility comes from viewing one’s individual performance relative to that of all the other athletes: the professionals, the competitors with disabilities, those in all of the age categories, the men, the women…. The self-esteem comes from making oneself do something that isn’t at all simple.

TOJ: The Race : What are the most difficult parts of the Hawaiian course?

FS: Each course has its particularities: During the swimming, there is such a density of excellent swimmers that it is really challenging to extract oneself from the masses. In other Ironman’s, many competitors have the sole objective of finishing. Hawaii is the World Championship and this classification becomes another hurdle. Essentially, one constantly struggles for a spot to swim where there’s not the feeling of being hemmed in. The cycling course is very tiring with its succession of slight hills, but more than anything else, it’s the ever changing wind which is difficult to master. A lot of racers take off in the beginning when it appears easy. It’s hard not to get swept up in the excitement and the desire to do well. Then around 100 km the fatigue sets and you feel the wind, the heat, the difficulties of the course, the uncertainty….Finally, the marathon run follows the two exhausting first legs of the race on a course similar to the one for the cycling: a succession of slight hills. To complicate matters, the heat reaches its maximum at mid-day. The second half of the marathon is very challenging because the temperature intensifies the effort one has to put forth. It’s a fight to get to the finish line. In Hawaii “you don’t give up.”

TOJ: What are five pieces of advice for a triathlete’s first time on this course?

FS: Being well prepared is not enough to succeed on this course. I think it is difficult to do well on this course the first time. As for me, I made too many errors. The advice I’m going to give would have been useful for me. Get yourself in sync with the race schedule as soon as you arrive in Hawaii. Go for a swim at 6:45 in the morning, familiarize yourself with each little segment of the bike route and run during the hottest part of the day. Also, make sure to get enough quality sleep. A nap might be a good way to fight off the jet lag. Don’t pay attention to the label of ‘World Championship.’ You have to do YOUR Ironman, and the high seeming stakes of this official title will just distract you.

Avoid fighting your way out of the pack during the swim (unless you are exceptional in this area). It’s not worth wearing yourself out if it’s not going to advance you. Pace yourself during the bike route, saving up some energy for the return ride, which is usually against the wind. Set out mindfully on the marathon, which is very difficult at the end because of the heat. You have to keep going right up to the end of the race, the places are often determined in the final kilometers.