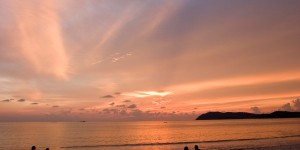 A warm-up for sultry climes – Training for Ironman Malaysia 2014: Part 1

Eight-time Ironman finisher Gael Couturier explains why he chose Langkawi, Malaysia as his race destination and why he decided to be trained under a coach for the first time in his running career.

Why did I go for Ironman Malaysia, choose Langkawi and not another close-by destination (from India) like Japan or Taiwan or even any of those Australian & New Zealand races (Busselton, Melbourne, Port Macquarie, Cairns, Taupo)?

First things first, let’s talk about the history of that race. It’s interesting to note that it started in 2000 and was held by a licensee of the Ironman corporation that has its base in Florida for 10 years until it stopped. Why did it stop? Well, I couldn’t get a precise official answer from Ironman itself but after discussing with some European athletes who have been racing there in that era, was told that it was because of dearth in participation.

This September, the race is rising again from its ashes. I think it’s a good thing for Asia and the sport of triathlon since this region has witnessed development around the multi-discipline sport. Now, everybody knows that racing in Malaysia is hard because of the extreme heat and humidity. Sure, that’s an extra challenge if you haven’t trained in such an environment but I live and train in India and I generally like the heat so for me this doesn’t really matter. Also, the minute you use words like “hard” or “extra challenge” with me, I’ll say “I’m in!” almost instantly (blame my sports teacher mom and my military–industrial–congressional complex dad). Also, the surroundings will be stunning (The

website says we’ll see tons of monkeys on the roads – hey, we don’t have monkeys in France!), the water will be warm at around 30°C (I remember racing in Tempe, Arizona, USA, with 14°C water – I thought my brain would freeze and I’m sure I’ve lost some cells back there) and more globally, Malaysia seems to me like a super beautiful exotic destination, just like Bali in Indonesia or the whole of Thailand. Finally, it’s very close by from India where I (presently) live and the plane tickets are quite cheap (around Rs.35000 round trip last time I checked). What’s not to like?

For the first time in my life: I got myself a coach.

Yes, after finishing eight Ironman races (five-times Nice in hilly southern France, one-time Tempe in flat but hot Arizona and two-times super-hilly Embrun in the French Alps), and after twice finishing in the medical tent with heavy duty infusion, I decided it was time for me to get a coach. I’ve never been able to race an Ironman under 14h. This year, as I’m getting older (I’m 41) and grumpy (true French right?) I don’t like it anymore when my friends beat me. Walter, a good friend and training partner from Paris, just raced an astonishing 12h 04min this month (1:15:30, 5:05:19, 5:34:31) and, well, it pissed me off. My goal is to swim under 1h15’ (beat him), bike around 6h (Walter’s too strong a biker) and run a sub-4h marathon (beat him) for a global time of under 12h. To help me achieve my goal I’ve called in my friend Frederic Sultana, ex-navy officer, long-distance triathlon world champion in the master category (the old guys) and WTS official triathlon coach. He coaches me online. He tells me what to do, whether it’s a swim, a bike, a run but more importantly, he mentors me on the intensity to add. I own a
Garmin GPS watch, the Fenix 2 (400 US$) and I record and report on the Garmin website all the data from every training I do (my heart rate %, my pace, the elevation gain and loss, the temperatures). For that, I just wear a heart belt and my watch. Then, when I come back home, I plug my watch into my Mac, log on the Internet and the website automatically downloads the data from it. Then my coach, who has my login and username, reads and analyzes my data and orientates my next workout.

What do I think of that?

I hate it. No. I used to hate it. I used to hate swimming in lines, running with specific paces on targeted distances and bike at given speed and given distances. Understand me. I come from a sport background where you’re allowed to do whatever you want, wherever you want for as long as you want – surfing, skateboarding, snowboarding. I’m not used to being told what to do, at least not in sport. For this I have my job (and my mom – yes, I’m 41, I know). But these days, I enjoy being told what to do. My coach tells me to bike for 50 min at a 130 beat per minute (bpm) pace max and then go for 10 min run at 150-160 bpm. And repeat 2-3 times in the same training. Fine. I’m loving it, so far. I’m loving the fact that in my gym in south Delhi, everybody is looking at me like there’s something wrong with me. I love it because they have no good bikes

available elsewhere. I sit for 3 hours in the cycling classroom and do my own training while normal cycling classes are going on and cycling students give me strange looks. I love it when at the end of the class the teacher comes and tells me he’s going to talk to the management because I am disturbing the class by being the only one not following his orders. I love it when I tell him that it’s not personal but I’m going to keep coming to his class and do my own stuff until someone in the management gives me a bike to train outside of this stupid classroom. I love to be considered a rebel like that. It gives me the feeling that I am training for something special, something not everybody can do. It gives me strength. Survivor, the band, crooned. It gives me the eye of tiger. Which is perfectly relevant since I’m in India. Tonight, coach said to go run 21 km. I’ll go in the park, by my house, in south Delhi. I’ll go with my headlamp and my iPod. And the “eye of tiger” blasting in my ears. Last week, I did 93 min of swimming, 370 min of cycling and 215 min of running. That’s 679 min, more than 11h30 min in total, my most consistent week since I’ve seriously started my training end of July. I told my coach. He said that was nothing. He said I soon would need to go up to 30h of training a week. That means I’ll have to go on holidays soon. Great, last week I loved my coach.