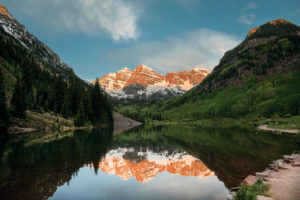 Do you live to shred the gnarliest pow? Do you love beer? Can you not live without clear blue sunny skies for at least 300 days a year? Do you have really high standards when it comes to natural, surrounding beauty? Well, Snowmass Village in Colorado may just be the place for you.

I’m in Siberia. It’s hot, humid, and full of mosquitoes. I’m on a train but not just any train. I’m on the infamous Trans-Siberian Railway. The longest railway system in the world, it covers over 5,000 kms and has connecting lines in four countries: China, Russia, Mongolia, and Korea. This train has attracted adventurers, writers and nomads from all around the world who documented their travels well before its completion in 1816.

Pretty amazing you say? Hold my vodka. I’m lucky to be on this epic journey, in the middle of nowhere, despite my tennis ball-sized mosquito bites. However, my mind keeps wandering. I know I should be present, but I keep thinking about my recent visit to Snowmass Village in Colorado, the state in the US that owns my heart. I keep thinking about the fresh air, the lack of mosquitos, the friendly people, the unlimited adventure potential—perhaps I’m getting cabin fever?

“I need to get off this train”, I mutter maniacally to myself as I swat a mosquito the size of a dragon. If I could, I would move to Colorado in a heartbeat. Siberia, on the other hand, is more of a one-time visit kind of place. This probably (definitely) makes me sound like a terrible traveller, unable to assimilate fully with the culture, constantly dreaming of a different (but better) place. I assure you, skeptical reader, this is just the power the sunshine state holds on its lovers.

If you’re not morbidly obese, if you’re used to sunny blue skies, rain, snow, and sunny blue skies again, all in the same day, if you have a butt-load of outdoor gear, if you only wear flannels, if you drink chocolate and oyster stouts (and a lot of PBR, in stark, ironic juxtaposition), if you ride your bike everywhere, if your favourite climbing parlance is “fourteener”, and if you listen to bluegrass, you’re probably, most likely, from Colorado.

While these are hilarious generalisations, they’re mostly accurate, just like the show Portlandia is about Portland. Just ask any flannel-wearing, environmentally conscious, beer-drinking, Prius-owning Coloradan out there. You’ll either find him or her playing outside, reading an archaic book, saving the world, and (most definitely) brewing beer at home or drinking at a brewery.

Now, Colorado is a big state with a lot of gems. From the fun and hip Boulder to the more urban city-scape of Denver, the Rocky Mountain state has a lot of diversity. The main common factor is that it’s pretty darn beautiful everywhere. However, culture, people, sports, cuisine, and mindset can vary throughout the state. This brings me to the quaint, niche little town I had never visited in all my years there (studying at Colorado College—a real-life Hogwarts).

Have you ever wondered what it’d be like to live in the Shire? Snowmass Village is a town full of magic in the most beautiful state in the world (editor’s note: this is not just the writer’s opinion, it’s every Coloradan’s). With cinematic trails that go on for days, this tiny little town is ideal for hikers, bikers, skiers, and all the other “ers” you can think of. A massive adventure playground both for children and adults, whether it’s a morning jog or a multi-day hike, the village offers it all, right from your backyard. While Snowmass is a fairly new town (incorporated in 1976), its history is unique and mammoth. Quite literally too. Mammoths and mastodons roamed the fields of Snowmass over 150,000 years ago. In 2010, a tusk of a female mammoth was discovered in the village by a crew of construction workers. After this discovery, over 5,000 bones of prehistoric animals were unearthed in the area. Now, if that’s not a party conversation-starter, I don’t know what is.

Most people know that Snowmass is home to some of the best winter ski mountains in the world. Most resorts offer Ski-in/Ski-out lodging (like my hotel, the Westin Snowmass Resort), and the area gets a bunch of snow every season. However, what’s lesser known are the amazing activities the village has to offer in non-winter seasons. In Snowmass summertime, the livin’ is easy and full of stoke. Just nine miles from downtown Aspen, the village has over 90 miles of trails to explore. Hike, run, swim, paddle, raft, bike—you name the adventure sport, and you can probably do it every day, all day, forever, for the rest of your life.

I started my adventure by rafting with an amazing, incredibly legitimate, forty year-old-plus company called Blazing Adventures. A whitewater rafting and adventure company for Aspen and Snowmass, I knew I was in safe hands. My raft guide (and also a ski instructor) Mike Lewis, nicknamed “the bear”, and rightly so, was a hilarious badass.

Full of tales, including one involving walking home drunk with a bear and one involving Hunter S. Thompson and his debaucherous (cocaine on literal silver platters, everywhere) funeral party. Due to snowmelt from the night before, we were unable to raft the originally planned line, ominously called Slaughterhouse. “The only way to learn how to swim white water, is to swim whitewater!”, Mike roared.

Great, I’m in the hands of a maniac, I thought. I soon learned he was probably the most experienced raft guide in the area—you definitely want him in your boat. “Working as a ski instructor in the winters and a raft guide in the summers- both seasons are equally amazing. Snowmass Village has many, many things to do. Basically any sport you can imagine, you can do”.

Rafting down the Roaring Fork River (a tributary of the Colorado) was something- with scenic 360-degree views, solid Class III rapids, and beautiful homes just off the banks (including Hunter S. Thompson’s Woody Creek abode), this AM half day excursion was perfect. The river also offers excellent grade five rapids for kayaking and rafting, which I was happy not trying.

Shortly after rafting, I met with professional biker, skier, snowboarder and Aspen Skiing Company representative, Tyler Lindsay. At this point, I suspected that everyone in Snowmass was a professional adventurer, whatever their profession may be. I probably would be too, if I lived here. “There’s a ton of great riding to be had in Snowmass. Mountain biking in the summer and split-boarding and snowboarding in the winter.

I’ve pretty much spent my entire life here—it’s a pretty special way to grow up. Snowmass is a great town to live in if you’re into an adventurous, outdoor lifestyle. Nearly 100 miles of single track mountain bike trails between Aspen and Snowmass, everything from smooth flowing machine-built trails to technical route-laden trails through the woods. You can get up into the high alpine above the tree line and all the way down to the valley floor. It’s a great mix of trails for every level of rider”.

Personally, I’m more of a climber and skier than a mountain biker. This is definitely an excuse for what followed. It was an amazing trail but most of it was uphill. Story of my life. I was terrible. I kept stopping, panting, gasping, wheezing, and cursing the heavens. I could barely make a successful turn. Tyler was super patient. My embarrassing anecdote aside, we finally made it up to the “yin-yang” platform at Spiral Point—and that’s when I knew the torture was totally worth it.

Breathtaking panorama views of the Elk Mountains and the rest of the ride back was downhill—the day had taken a pretty sweet turn. I was now realising why people in this town have 0% body fat. If you’re looking for a trail in Snowmass, try the Rim Trail, it won’t disappoint (unless you’re an out-of-shape baby like me).

The following morning, I went on a hike to possibly one of the most scenic and most photographed spots in Colorado—the Maroon Bells-Snowmass Wilderness. Two major peaks in the Elk Mountains, both over 14,000 ft, they’ve also been dubbed as “the deadly bells”, mostly due to the loose, unstable, mudstone that make up the bells. Definitely a bit sketchy for climbing, most visitors (more than 300,000 per season) visit the area for the great hikes and overnight camping spots. We visited early morning, took the quintessential Bells-reflecting-in-the-lake shot, and embarked on a short hike up to Crater Lake. On the way, we ran into a moose. Not literally, as that wouldn’t have been pleasant, but we were pretty close.

It eventually strolled off and we reached the lake. A gentle, easy hike full of breathtaking views, I think I could do it every day and it would never cease to amaze me. Shortly after, we went for a much deserved beer festival. The town is saturated with festivals, all the time—I don’t know how anyone gets any work done. After trying what seemed like more than 100 flavours of delicious (and plain weird) brews, it was time to sleep under the stars. Fast forward two days. After this fairytale two-day trip to Snowmass, the land of mountains, magic, sunshine, and beer, I’m in Siberia. As a mosquito flies into my mouth, I don’t flinch—I’m used to it now. A gruff Russian waitress shouts at me for drinking beer on the train. She insists I only buy and drink the vodka (moonshine) she’s selling. “Now this is a vacation”, I sarcastically mutter to myself.

In hindsight, Siberia was an “interesting” wilderness and I’m glad I “tried” it. Snowmass Village in Colorado however, was an experience, an adventure, a whole different way of life (even if you don’t compare it to random Russian trains), and that’s why I always found myself daydreaming about my time there. In the words of the rude Russian waitress on my train (who had no idea her line about vodka was interchangeable as a metaphor for life), “you have to try it to know if you like it”.

So if you shred the pow, enjoy the brews, O.D. on Vitamin D, bike like an obsessive maniac, spend more time on a raft or paddleboard than you do on land, and have mostly REI in your closet, get off your bum and go to Snowmass Village.

This trip was made possible by Snowmass Tourism. Special shoutout to Mar Naibi, the Social and Leisure Sales Manager, my guide, main contact and babysitter for my time in the village. Special thanks to Blazing Adventures, Westin Snowmass Resort and Aspen Alpine Guides for their support.

Featured Image: The Maroon Bells- two major peaks in the Elk Mountains, both are over 14,000 ft. This is widely regarded as one of the most photographed spots of Colorado.