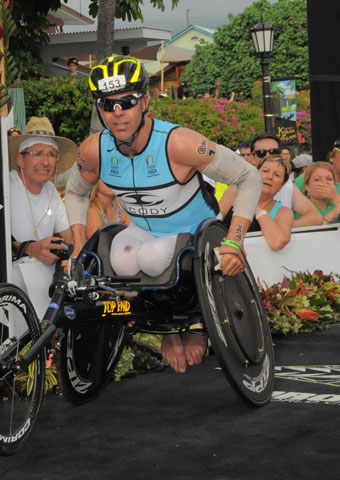 A mishap in the early days of his career as a triathlete, the Aussie Ironman was not someone who would succumb to physical disabilies. Hitting the tracks as a para-athlete later on, he competed in the TRI-1 (handcycle/racing wheelchair) classification and was the TRI-1 Paratriathlon World Champion in 2009, 2011 and 2012. Add to that the victorious outing at the inaugural Australian Paratriathlon Championships in January 2013 and Bill Chaffey had etched his name among the toughest ultra-endurance participants in recent times.

TOJ: What’s so special about Kona when you’re a triathlete Bill?

Bill: This is my first time at Kona, so I am very excited and I feel privileged to be here. The Kona Ironman race is so special because it is an island paradise, tranquil and relaxing, yet it can throw such treacherous conditions at you during the race. To be able to come out from a day of heat and wind and celebrate in paradise is an awesome feeling. The crowd support is like no other Ironman in the world and I love the cheering Kona crowd when you approach the finishing line.

TOJ: What is the Ironman corporation doing to help disabled athletes? Is it specific to Kona or are they taking good care of you guys all year round, all over the planet?

TOJ: Did you take any day off in this paradise after the race?

Bill: I’m lucky enough to have had this race as my season ending race, so I have definitely stayed in Hawaii for a few days afterward to relax and take in the beauty of these fantastic islands. My family and I have been relaxing in Waikiki post race.

TOJ: It’s so beautiful over there. Did you have a hard time focusing on the race?

Bill: I actually had a hard time focussing on anything but the race until it was over. I guess I’m not the most enjoyable person to be around pre-race. The nerves tend to take over a bit. However, I did swim on the course last week and found the marine life extremely beautiful. This made it a bit hard to concentrate on my swim session. But on the race day I’ll be 100% focused on my task.

TOJ: Your personal story is very inspirational. Can you tell us more of what triathlon still brings into your life on a daily basis?

Bill: I’m a strong believer that sport keeps the mind healthy as much as it does the body. I think everyone needs something outside their work and daily life to take them away from the mundane. Triathlon is far from mundane and it continues to keep me fit, healthy and happy. A fit, healthy and happy person is more enjoyable for other people to want to be around.

TOJ: What has changed since your accident while training? Do you train more? Less? Why?

Bill: I probably train about the same now, however I train a lot smarter. More training does not always equal better training. Prior to my accident and subsequent injury, I was a regular athlete. After entering the world of para-triathlon, I’ve appointed a coach and become quite successful in the short course triathlon scene. This requires a more focused and disciplined form of training to stay at the top.

TOJ: You’ve been nominated by the International Paralympic Committee for ‘Athlete of the month’ for September. What would that change in your sport life? What about your personal life?

Bill: It’s a great honor to win such an award and just to be nominated is quite humbling. To think people outside my immediate family and social network recognize my achievements is a good feeling. Travel and time off work to race and train is always a financial burden. I don’t think it would change the way I train or live. However, to win such an award may help promote my name. This may channelise support from people and businesses making it easier for me to train and race.

TOJ: Any news on your qualifications for the 2016 Summer Paralympics sprint-distance?

Bill: There will be a qualification process for athletes to be selected in the para-triathlon team for the 2016 Summer Paralympics. As of now, that process has not been finalized. At this stage, I believe it may involve a series of races throughout the world where athletes will gain points to be eligible for selection. The prospect of attending and competing in a Paralympic Games is an extremely exciting one.