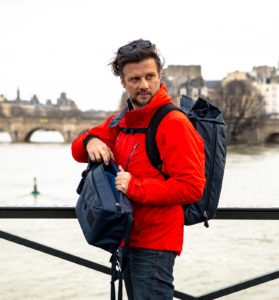 These two new photography packs from f-stop are the latest from the famed company and they don’t disappoint.

The Fitzroy is a sling style pack and I’ll start off by saying that I’ve never been a big fan of this format simply because putting all that weight on one side of the body, on one shoulder, has never been good for me. I was one of those kids who would let their backpacks hang from one strap to look cool and casual but would, and still do, travel with both straps firmly balanced on my back. Alas, for the sake of science and The Outdoor Journal, I decided to spend a few days around Paris with Fitz and its larger brother, Dalston, to see what they could offer on an urban photo outing.

First of all the Fitzroy, Fitz for his friends, is deceptively small. Within its diminutive looking size, there’s a large removable 11 liter padded compartment with two adjustable velcro dividers giving three sections for camera body and lenses or any combination you heart desires. The sling is wide and well padded and slides well when you slide it from your back to front. There are only two ways into the pack, a roll-up opening on top and a full-length weatherproof zipper on the right side. This layout is a useful design feature for an urban environment where you’re often looking around, distracted, giving little attention to what’s going on in your immediate vicinity and keeps prying fingers from your precious gear.

Talking about the zipper, it has large dual toggles that allow for easy access even with gloves on. The roll-up opening means that Fitz can expand quite a lot and allow you to embark a water bottle, other gear, a sweater, etc. The build is top notch and the waterproof ripstop fabric won’t let in any wayward rain.

After a few days of walking around with it I got used to stowing my camera away and easily swinging it round front rapidly with easy access to it. I liked not having my camera dangling about since it allowed me to enjoy my surroundings more instead of having a trigger finger always ready to snap away and think of shooting. When I did want to shoot, however, it would be a simple and fluid movement to bring the pack front and always at the perfect height to easily access my camera.

Work Table on the Go

In addition to the easy access, having the pack in front creates a sort of work table where I can change lenses safely and quickly and this means having more creative freedom.

Finally, of note, there are two other discreet zippers parallel to the main one. The outer one is an ample flat pouch with a detachable key chain and inner mesh space for loose objects. The second, much smaller zipper, reveals a small space big enough for a large mobile phone and documents such as passports and even wallet if you should feel inclined to put all your most precious eggs in one basket. Because this pouch is really small and right up against your back, it’s almost impossible to see and hard to access given the small latch so it could actually be better to store smaller objects there than in pant pockets when you’re in a pickpocket-prone place like the Paris metro or some busy bazaar in a far off land. Last but not least, Fitz holds one last up ace its sleeve; two external latches for your tripod. Or yoga mat. Up to you.

Despite wanting to hate it, this little bag won me over for how well it performed. And the single sling layout didn’t hurt my back as I thought it would’ve also because this pack weighs in at a paltry 500 grams. A featherweight.

Fitz’s bigger brother, Dalston is made of the same material and has two straps and much larger capacity with 5-6 internal compartments and the same roll-up opening on top as the Fitzroy, allowing for a lot of extra space if you need it.

Although it doesn’t actually look that much bigger than Fitzroy, the backpack has almost all the things you’d expect from a professional pack of this category. That includes a large pouch against the back large enough for a 15inch laptop and an additional pouch in front with an internal mesh space, detachable keychain, and any other medium sized object you can think of.

Unlike the Fitzroy, each side of the Dalston has a large but almost invisible weatherproof zipper that allows you to access the internal padded compartments. The traditional backpack layout means that it doesn’t quite ‘sling’ as well as the Fitzroy but can be brought in front easily and used as a sort of workbench to access your gear through the side zipper.
The roll-up opening up top means that it expands quite a lot. I would even go far enough to say that there’s sufficient space to allow you to make this the perfect gear and clothing combo for a weekend getaway.

The only omission is external straps like Fitzroy for a tripod. Or yoga mat. The straps are padded and comfy and there’s a basic front strap for keeping everything nice and stable whether you’re climbing a fence or even skiing down a slope. Even though the pack is more than twice the size of the Fitzroy, it’s only 300 grams heavier, clocking in at about 800 grams. It’s practically weightless.

Cons: None although I’d have to nitpick about the curious absence of external straps on the Dalston while the much smaller Fitzroy has them.