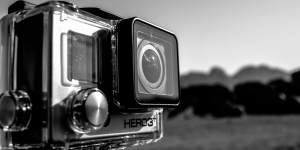 The GoPro HERO3+ Black edition, until recently, was the “smallest, lightest, and most powerful GoPro yet”.

But now the HERO4 is here, and it’s a game changer.

The Emancipation GoPromation: the Abe Lincoln of adventure film is born.

A beaded, long-haired hippie surfer wanted to capture professional point-of-view shots of him surfing. Amateur photographers couldn’t get close enough, and there wasn’t any equipment available to get close-up shots, at least at affordable prices.

So naturally, he started selling beads and shell belts out of his VW van. Selling a belt for about $20, Nick Woodman, the creator of GoPro, collected the funds required to make a prototype. In 2004, the company sold its first camera- a 35 mm, 3 MP, film version.

“The World’s most versatile camera”

GoPro is in the small minority of companies that abide by their simple yet genuine taglines.

From the HERO, to the HERO2, to the HERO3, with several white-silver-black editions,  the GoPro HERO3+ Black Edition is the latest flagship model. It replaced the Hero 3 by adding essential features, including a 20% reduction in size and weight. It begs the question- as technology advances, and action cams become smaller and smaller, will Thumbelina buy the GoPro? Or, on more of a philosophical-thought-experiment note, if a GoPro falls in a forest, and no one is around to hear it, does it make a sound? Probably not, since it weighs 2.6 oz (28g) and measures 2.3 x 1.55 x 0.08 inches (5.8 x 3.9 x 2cm).

GoPro announced its 4K video standard (double the resolution of HD) and made nerdy heads turn all around the world. However, this feature turned out to be deceptively useless.

Stoked to be shooting in what I thought to be the future of moving images, I shot most of my footage while expeditioning in Namibia in effin 4K. Climbing the highest dune – “that would be great in 4K”. Sandboarding and sailing- “how amazing would that look in 4K”. Looking at large bottomed elephants and slippery seals- “I shan’t settle for anything less than 4k”.

In my excitement of being in the most bizarrely beautiful country, with it’s landscape analogous to that of a Star Wars movie, I had failed to notice that 4K only shoots at 15 frames per second. Distracted by the Planet Naboo-lookalike, I also failed to realize that I wouldn’t be able to view my super HD footage. That is, unless I bought a $25,000 Sony TV.

vain). The 4K files are massive and most monitors cannot reach 3840 x 2160 resolution. I had to compress each and every video and in the end, I was left with a very sticky affair. Filled with regret, I wished I had chosen the regular 1080p resolution, but alas, greed got the better of me- the folly of man, as well as that of the GoPro HERO3+ Black Edition.

However, in comparison, predecessor GoPro’s are still runts of the litter.

Now that I’ve got the 4K rant off my chest, it’s time to focus on other, better features (that haven’t stabbed me in the back). With a maximum still image resolution of 12MP and a 30fps burst rate, the stills are exquisite. A wifi remote, a vastly reduced external housing size, white balance adjustment and simultaneous photo+video recording, this is the most compact and easiest to use GoPro yet. The battery life is a decent improvement as well. I used to have disagreements with my HERO3 over it’s lifespan but with the 3+, GoPro managed to squeeze in a 1180mAh battery.

In my opinion, the GoPro HERO3+ Black Edition is the sexiest GoPro yet. If it were a girl, I’d take it out to dinner, and definitely remember to call back. Maybe not the next day, but in a few days, to show I’m interested but also willing to give her space. Then we’d go on a few more dates, and when she’s ready, I’d take off that waterproof, dust-proof, shock-proof housing- real slow.

Everybody calm down, the GoPro HERO4 is here and it’s the best thing to happen since GoPro happened.

The battery no longer attaches from the back but rather drops into the bottom, making it a slicker, smoother experience. In place of the wifi button on the side, is the new “settings” button, which allows you to view the settings of the mode you’re currently working with. This eliminates a lot of agitating button presses.

Shooting at night just became a whole lot cooler. GoPro cams were never known for their breath taking night photography, but with a great GoPro come great features- Night Photo and Night Lapse. This allows you to adjust exposure to 30 seconds for single shots as well as time-lapse photos.

P.S.- To those not pleased with the price tag, GoPro has launched its first entry level camera. Simply named the “HERO”, it goes for a historically cheap $129.99 and features high quality 1080p30and 720p60 video.