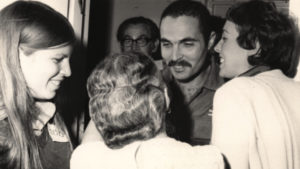 This personal account of an Israel Defense Forces officer in Egyptian captivity during the Yom Kippur War, can teach us all something about ourselves.

My copy of Hope Comes Knocking dropped into my hands at a very inconvenient time. I had family in town and was already behind on work. I ripped open its package anyway and decided to give the book a glance over, but as I read the first page, then the next, and the next, the familiar sounds and safety of my home faded away as I transported into a harsh prison cell with Micky, somewhere on Egyptian soil. (Hope Comes Knocking is now available on Amazon).

Micky’s story of survival transcends the specific time period in which it occurred. It’s a story that all humans can appreciate and learn something about themselves from, but here’s some context.

In 1973, the Yom Kippur War started off with a surprise attack. Egyptian and Syrian military forces crossed ceasefire lines to attack Israeli soldiers positioned along the Suez Canal on Yom Kippur, the holiest day in Judaism. Also known as the Arab–Israeli War, the fighting lasted from October 6th to the 25th, when Israel regained strategic positioning over the Sinai Penninsula.

A deep well of strength that he had inside him all along, training or not.

Just a few weeks before this surprise conflict, Micky Seiffe was a 28-year-old student living in Jerusalem and working towards his doctorate in pharmaceutical sciences at the Hebrew University’s faculty of medicine. Micky also volunteered in the military reserve as a pharmacist in a field hospital. He had hoped to achieve his Ph.D. and then begin work in the field of chemistry. That was until he received a call from his Israel Defense Forces (IDF) recruiting officer. The recruiter asked Micky to further volunteer for a three-week position at a UN observation post along the ceasefire lines near Israel’s shared border with Syria and Egypt, mostly it turns out, because of his English language skills. To Micky, the position seemed outside his bailiwick as a medic but he was assured the role was not too far beyond his training level. And to be sure, it wasn’t. Micky’s heroism in the moments before his capture and throughout his two-month captivity came from a deep well of strength that he had inside him all along, training or not.

If you’re like me and you get lost in movies like Castaway or The Martian, if you enjoy reading real-life shipwreck accounts or stories of survival and isolation, then Hope Comes Knocking will connect you to that intense, moment to moment headspace.

When the enemy forces reached Micky’s outpost, they took him captive, violently stripping him of all his personal possessions. He was tossed in a cell alone, blindfolded, tied up and beaten hourly. He was deprived of food and water. Since he could not tell if it was day or night from his cell, he had no notion of passing time. Despite all of these physical hardships day after day, what truly weighed on him was the toll he knew his absence was taking on his parents.

Micky built himself a a flak jacket to prevent them from injuring his soul.

Micky quickly came to the realization that although he couldn’t control the external world of the prison he found himself in so abruptly, he could take control of his inner world. “There was one place that the captors could not hope to reach – inside my mind.” Although he sustained superficial injuries to his body, including whip marks on the back of his neck that are still visible to this day, Micky built himself a “defensive wall, a flak jacket” to prevent them from injuring his soul.

To survive his two months in captivity, he broke each day, and each beating, into a series of challenges where his hope was to win small victories by not showing signs of weakness, by not screaming. Ultimately, life itself was the prize.

“Although he endured months of systematic torture, he acknowledged the sporadic encounters of humanity as well.”

One thing that struck me about reading Micky’s account was that although he endured months of systematic torture, he acknowledged the sporadic encounters of humanity as well, however rare. He took notice when some of his captors made efforts to understand him beyond the typical military interrogation. “I saw in Egypt people who were capable of independent thought, who weren’t held captive by the brainwashing mandated by the ruling class which shackled the minds of the general populace.” Remarkably, Micky even posited the likely overlap of mutual interests he probably shared with the Egyptian people underneath the cultural programming of hatred. “There were intellectuals who were trying to understand our side as well. These people held values of morality and humanity, they showed tolerance towards diversity and tried to better understand people who were different than them. We may have underestimated how close their values were to ours.”

“This life that I have been gifted was not presented to me on a silver plate.”

It is fitting that Micky’s reflection is released on the 40 year anniversary of the Israel-Egypt peace treaty. Given his experience in captivity, he could have lived the rest of his life hardened and unforgiving. But instead, he leads a life of compassion. His time as a soldier in captivity, not knowing his fate from minute to minute, taught him the significance of family. And now his life is devoted to the mission of saving lives through developing new medicines as a civilian. “This life that I have been gifted was not presented to me on a silver plate. I now devote this life of mine, out of a sense of a great personal goal and duty, to the mission of saving the lives of others. I’ve done so through the new medicines that I developed while working as a civilian, through the donations of blood that I am in charge of collecting in times of war as the commander of the IDF Chief of Staff’s Blood Donations Unit, and through the medicines that I have helped to develop in my voluntary service of the Ministry of Defence, medicines meant to save people’s lives if non-conventional weapons were ever used against us in war.”