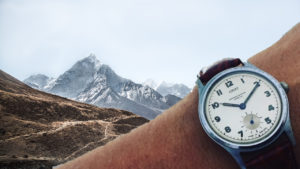 Smiths: a Once-Proud British Icon That No-One’s Heard Of

Editor’s Note: Everyone knows that a Rolex Oyster Perpetual accompanied Sir Edmund Hillary and Tenzing Norgay to the summit of Everest. Or do they? As it turns out, all those ads we grew up with were just a little bit disingenuous. There is more to the story than meets the eye…

Despite my interest in history, I was unaware of Smiths – a unique British watch brand that has now become defunct. In reality, the ultimately successful 1953 British expedition to Everest was sponsored by the only British watchmaking company at the time, and as per the records, it was likely the only watch worn or carried all the way up to the top. I reached out to Andrew Rollings to tell us a little more about the brand, and about the resurgence of interest in rugged, non-electronic devices that enabled explorers nearly seventy years ago.
– Apoorva Prasad, The Outdoor Journal.

Before I set out my case, let me tell you a little more about my background. I have been on a very long journey without climbing a single mountain! One with lots of peaks and valleys but now I find myself here, with my own ‘Smiths Watch’ business, celebrating all that was great about 1950s expeditions and exploration. So how did I get here?

I was the child who probably asked too many questions. We were never rich. Both my brother, sister and I were brought up with a ‘make do and mend’ mentality, often visiting the village tip (Ed. a landfill) when we needed something fixing.

Whilst a young teen, my father was made the manager of a factory next to a television repair shop. In the school holidays, I would sometimes accompany him to his work, and would often spend my days digging through the skip that in the car park of the factory next door. I would disassemble TVs and video players, trying to figure out how they worked!

“Mountaineering and Antarctic exploration legends, such as Hillary and Fuchs proudly advertising their Smiths watches”

Then, one day we were at a car boot sale, and I spotted an old, Buren Grand Prix watch. After much pestering, my parents were convinced to buy it for me. It didn’t work, but I did manage to take it all apart and figured out that the balance staff had broken. In the end, I never managed to get that watch fixed as it vanished in a spring clean a few years later…but that was where my fascination started. A ‘watch nerd’ was born!

It was shortly after that, I found an old, battered Smiths Deluxe at a car boot sale. At the age of 13, I disassembled and serviced my first Smiths watch. My fascination for restoring Smiths’ watches subsequently grew as I uncovered adverts from past eras with famous sportspeople and explorers sporting the model. My bedroom wall eventually became covered with 1950s posters. Mountaineering and Antarctic exploration legends, such as Hillary and Fuchs proudly advertising their Smiths watches on their wrist from Mount Everest and Antarctica.

I always loved the outdoor life myself, was a keen hiker and enjoyed taking the Smiths watches out with me on ‘expeditions’, however, I decided on a career in education and a ‘spare time’ hobby in watch restoration. I continued to learn more and more with each watch bought and disassembled.

In 2016 the small primary school where I had become the headteacher closed down. All of a sudden, I had a lot of very quick decisions to make about my future. They say that every cloud has a silver lining, and I decided that I wanted more variety in my life, so I started two businesses. An educational consultancy and a small business that restored and marketed Smiths and Smiths related watches. Ironically the consultancy gradually diminished whilst the Smiths watch business grew and grew!

That small business became Rollinix-Smiths-Watches and since that fateful day, I have never looked back. We have developed a loyal band of followers that are helping to spread the Smiths name once again, with sales from all over the world. The restoration side to the business was also necessary, as some of the High Street prices for repair were simply astronomical, as knowledge of Smiths and their movements had dwindled over the years. You could call me a ‘one-stop’ Smiths watch shop.

So, to the reason you’re reading this, and my assessment of the infamous watch that Sir Edmund Hillary took with him to the summit of Everest? One thing always stood out in my experience of restoring these Smiths watches, the solidity of the cases. Dennison cases were responsible in the early/mid-1950s and the relationship with Smiths was a sound one. It allowed Smiths to combine the reliability of their movements with robust and waterproof cases. It is worth noting that Dennison also benefitted from Hillary’s summit of Everest with a ‘We made the top of Everest’ poster campaign of their own.

Highly reliable, many of these watches are still running here in my store 67 years later. Of course in the 1960s, Smiths introduced their first, shockproof balance which upped the ante a little further still. The balance staff in the Hillary expedition watches had previously been the only weakness…however many have survived that 67 year time leap and I have my own 1954 Smiths ‘Croff’ based on the Hillary watch. Fully made by Smiths to the exact specifications as Hillary’s watch which has recently accompanied me into the mountains of Iceland and Norway without incident!

They are incredibly robust and solid watches, filled with history and to prove their solidity…the British military commissioned the W10 in the late 1960s and this was the watch of choice for UK soldiers in all combat missions during this period.

The big question will always be; did Sir Edmund Hillary really have his Smiths Deluxe on his wrist on the summit of Everest? Yes. I fully believe he did. Matt [Ed: Matthew Knight] on the TZ-UK Forum has put a fantastic case together with photographic evidence showing that Tenzing Norgay was almost certainly wearing a Smiths Deluxe on a ‘Bonklip-style’ military band when they were approaching the summit. Hillary himself stated that it was the Smiths watch that he was wearing at the summit itself, however, it is clear that the Rolex Explorer he had been given for a previous expedition also accompanied him on the mission. Many of the team did indeed wear two watches, one on each wrist as can be seen in many photos of the expedition on the wrist of Charles Wylie.

Sometimes history is skewed and there was some very cleverly ‘engineered’ reporting at the time. Rolex grooming a young advertising executive called Ayaz Peerbhoy to be the first to release the news of Hillary’s conquest of Everest with a ‘Rolex’ slant. It would seem that this was where the rumours began. Rolex also ensured that Hillary and much of the team were gifted watches in Calcutta, on their return journey from Everest. There are at least two Rolexes floating around in museums, both with the claim that Sir Edmund Hillary wore them.

The argument rumbled on for many years and there was an interesting communications ‘war’ between Smiths and Rolex that ensued. In my opinion, even this tells us that Smiths was the watch of choice on Sir Edmund Hillary’s wrist when he reached the summit… although over time, if you follow the advertising campaign, Rolex gradually withdrew the claim that it was ‘the first watch’ on the summit of Everest and tempered those claims to being ‘with Hillary on his conquest of Mount Everest’.

Smiths watches were a British institution from 1946 until 1980. However, in the final five years of production, Smiths had largely stopped making their fine, English made movements in the Cheltenham factory. They seem to vanish with a whimper. Most of the catalogues were lost and most information from those years of production could only be found in the minds of the workers. Innovation moved on. At the time digital watches were in full bloom, and old mechanical Smiths watches lay forgotten in drawers all over the county, gathering dust.

“Here’s hoping the Smiths name lives on for many years to come!”

I bought my first Smiths Deluxe for £10 around 30 years ago. It is only in the past few years, possibly fuelled by the interest in British manufacturing with the Brexit debate, that we have started to realise just what a rich history Smiths had. Take any great name of the 50s, Stirling Moss, Mike Hawthorn, Len Hutton…they all featured on the 1950s Smiths posters along with the better-known adverts featuring Hillary and Fuchs. My £10 Smiths Deluxe from 30 years ago is now worth £200. The Smiths Everest Automatic, the only fully English made automatic watch ever made, now regularly fetches £1k to £1.5k. Similarly, some of the military models that Smiths produced for the British army are closing in on the tens of thousands mark. The simple fact remains that the supply of these watches is finite, therefore their value is rapidly appreciating. They are catching up with the more exclusive antique watches out there as they enter the retro market and interest in British manufacturing booms.

I hope I can offer all my clients a chance to own a piece of British manufacturing history. However, I have taken a particular interest in welcoming a few clients who have purchased watches from the ‘Everest’ range, purely as they are mountaineers themselves. They want to recreate their own ‘Hillary’ moment by wearing a Smiths Deluxe watch on their own expeditions.

I’m fastidious with restoration and letting go of a project is never easy…but it has been wonderful seeing photos from all over the world of Smiths enthusiasts using their watches on the rock face. This is where these beautiful old watches are at their happiest… in their natural environment! Here’s hoping the Smiths name lives on for many years to come!

You can find out more about Rollinix-Smiths-Watches here.