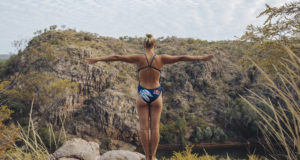 At the age of 27, Australian Rhiannan Iffland has just established herself as the best female cliff diver in history. She’s had so many wins this year that her wikipedia page can’t keep up. Beyond her travel for competition, Rhiannan and her sponsor Red Bull have just released Diving Into The Australian Outback, a short film featuring Rhiannan’s extreme cliff diving adventure into the wild.

From June through September of this year, Rhiannan competed in the Red Bull Cliff Diving World Series, which took her from Texas to Spain, to the Azores, to Switzerland, Copenhagen, Bosnia and Herzegovina, and the final stop in Polignano a Mare, Italy.

After skyrocketing to the top of her sport, Rhiannan returned home to Australia to explore her roots.

COMPETING ON THE WORLD STAGE

As the back to back champion in 2016 and 2017, Rhiannan had to defend her title over all seven stops to claim her third King Kahekili trophy in just 3 seasons on tour, becoming the first diver to do so ever. Diving from a height of 75 feet is a difficult mental hurdle and takes a tremendous toll on the body even with a perfect landing. The dive that secured the victory this year for Rhiannan was a new variation for her – a backwards triple somersault with a double twist. 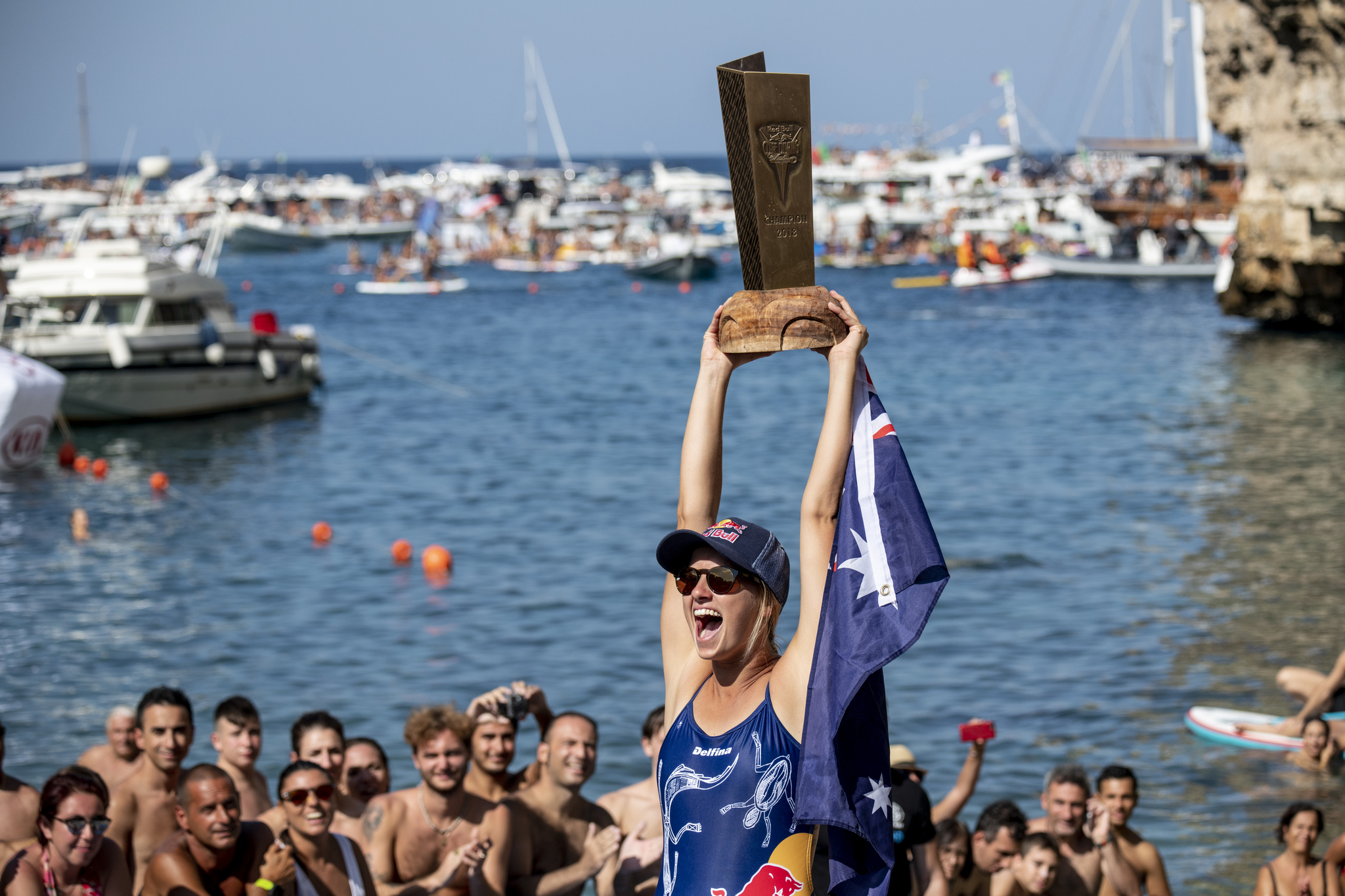 Just weeks after earning the hat-trick on the Red Bull circuit, Rhiannan traveled to Abu Dhabi to compete at the FINA High Diving World Cup. One year after winning gold at the Worlds in 2017, Rhiannan needed to rank in the top 8 to compete in next year’s world championships. She dominated the competition over four rounds of diving.

After skyrocketing to the top of her sport, Rhiannan returned home to Australia to explore her roots. With a small Red Bull filmmaking and safety crew, Rhiannan ventured into the Australian outback to a remote area called the Jawoyn lands.

In the film, she speaks with native aboriginal tribes people to learn about their culture, pastimes and rites of passage. With their blessing and guidance, Rhiannan explores the Nitmiluk gorge system, scouting out the best and most extreme cliff diving spots. She braves several narrow scrambles to reach picturesque, monolithic rock faces cropping out over black water below. After tossing down her sneakers to break the water, she performs a series of graceful dives between 52 and 78 feet, her highest dive to date, creating a spiritual connection with her surroundings.

In terms of production quality, Rhiannan’s Rainbow dive, shot in 4K, delivers the level that we’re used to seeing from Red Bull. The shot selection, grading and sound Red Bull achieves in this 14 minute sports documentary require talent and years of experience, much like what it takes to achieve Rhiannan’s elite diving skills. The opening shot of the film captures Rhiannan performing a massive layout gainer from over 70 feet, instantly hooking the audience. The low angle illustrates the extraordinary height in a scene that looks unreal. Taking such dives out of competition amplifies the daredevil aspect of the sport. In Rainbow dive, Rhiannan isn’t diving for a trophy or winner’s purse or even glory – she jumps to a connect with a sacred place.

Another highlight of the film is during the traditional ceremony – sand whips through the air as the musicians play an ancestral melody in a truly chills inducing experience. The film’s score departs from the lo-fi bass beats that you might expect from an action sports doc. More appropriately, the score reflects tribal voices like you might hear in the film Avatar. 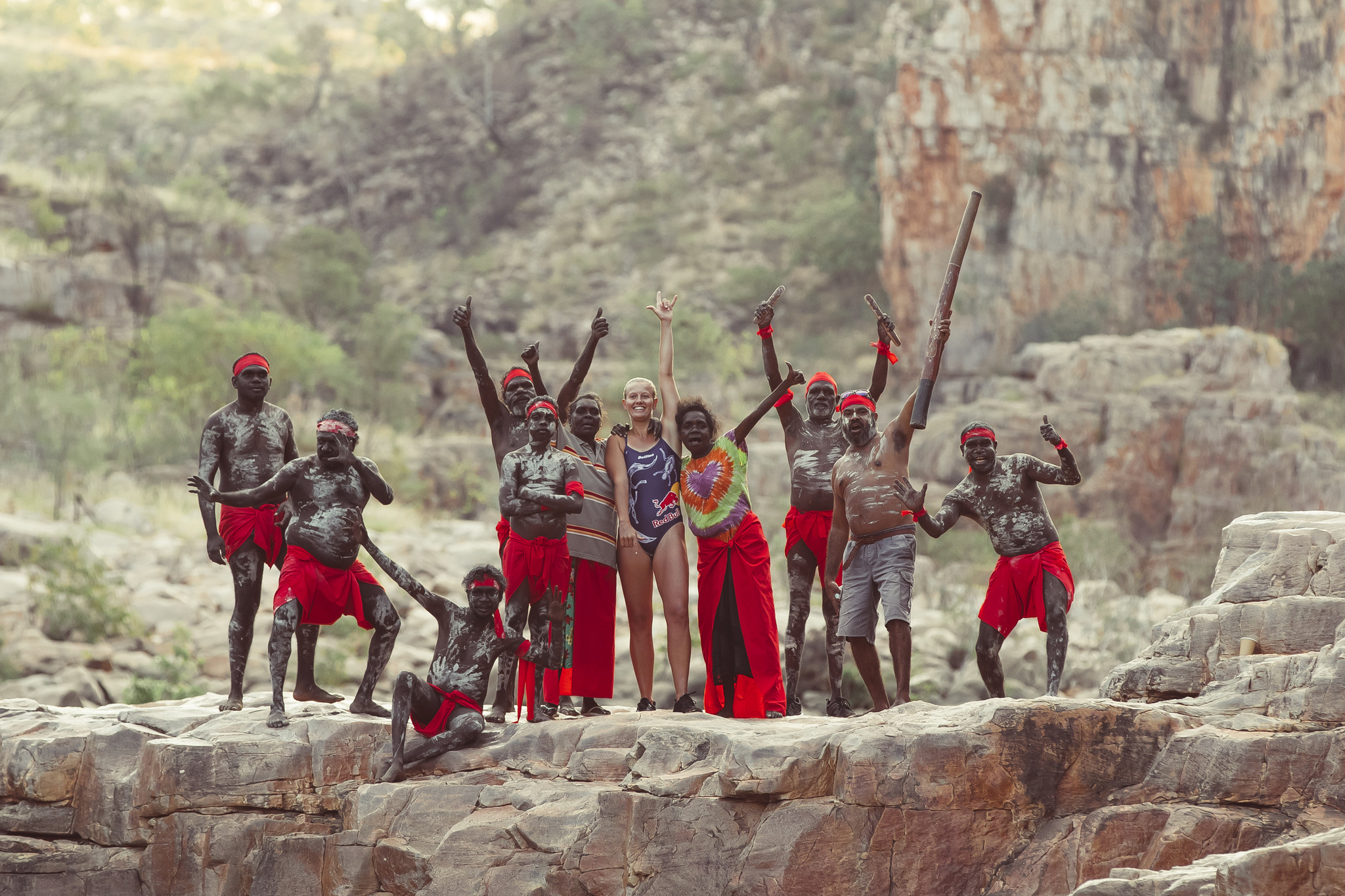 Out of respect for aboriginal peoples, Red Bull’s production thoughtfully connected with a Jawoyn cultural advisor to guide the crew on their journey to some of the most dynamic cliff diving spots on the planet. Stripped down, Rainbow Dive plays out much like an episode of Adrenaline Addiction, where a group of untrained daredevils throw caution to the wind as they seek out extreme cliff spots in locations like Hawaii and Arizona. However, Rainbow Dive is enriched with layers of cultural significance as Rhiannan explores parts of her homeland that are not accessible to most of the population and listens to stories that have been passed down through oral tradition for thousands of years like the mythical story of the Rainbow Serpent, for whom the film is named after. “We feel very lucky. There’s not many people that get to experience this, and you’re welcoming us here, and it’s definitely a privilege,” Rhiannan shares.

To follow along the career and training of such a grounded champion performer, check out Rhiannan’s social media.