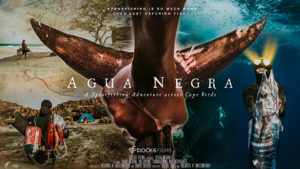 Spearfishing is a necessary way of life to many people around the planet, including the locals on Cape Verde island. To a few dedicated individuals, like the ones in this film, they’ve committed to travel, explore and hunt in the midst of the food chain as a lifestyle. In Aqua Negra, spearfishing is not portrayed as a sport. There is no competition for the biggest catch, no first place medal. A small crew tests their patience, skill and grit in the waters off Cape Verde island, in a way, to examine destiny itself.

It exposes the rare perspective of humans as a vulnerable part of the food chain.

The film opens with the following bold, yet oxymoronic disclaimer: “The following film contains awesome spearfishing material that could be offensive to some.” If you’re sensitive to hunting or fishing footage, then you should probably watch something else. However, this film is not just for fishing enthusiasts. It transcends spearfishing. It exposes the rare perspective of humans as a vulnerable part of the food chain and the nitty-gritty of what it takes when we forgo grocery stores and go straight to the source for our food. 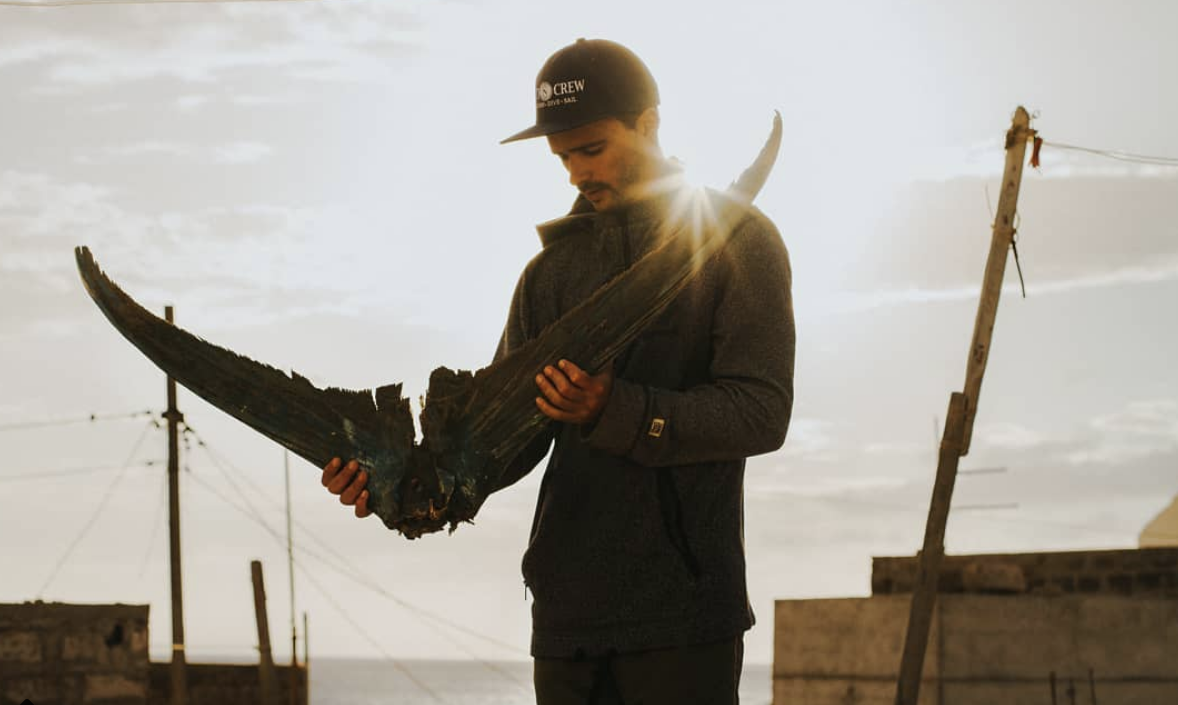 The cinematic introduction to the film subverted my expectations. Instead of a spearfishing documentary, this is an artistic film about searching. With monochrome color grading, faded silhouettes and somber music reminiscent of the score from American Beauty, the serious tone surprised me. 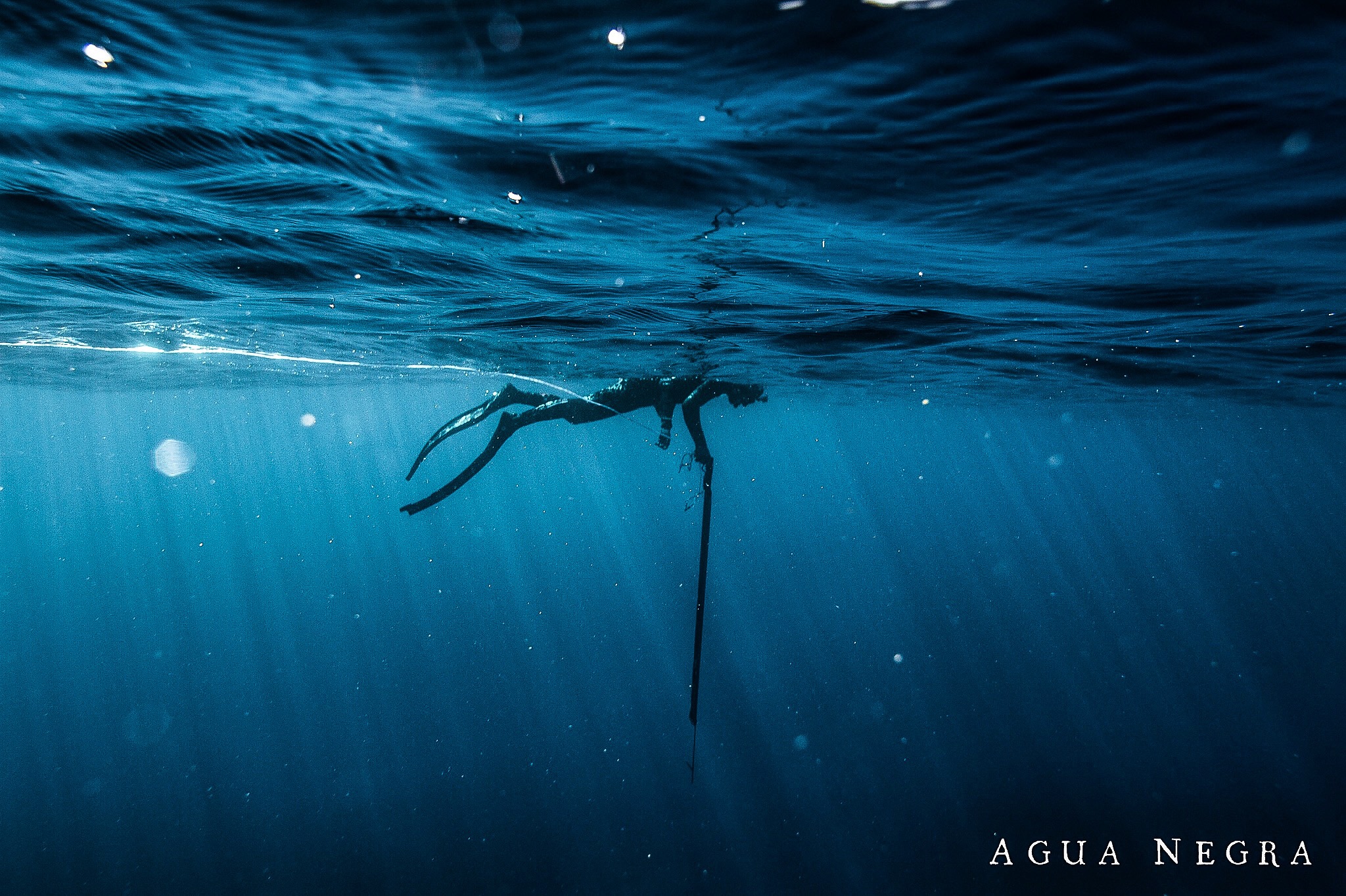 After a brief explanation about what motivates David Ochoa to pursue his passion, the film shifts its tone from melancholy to wondrous. The score sweeps with awe, on par with the soundtrack for Planet Earth. After a quick chapter marker, the switch to color makes the establishing shot of Cape Verde look utterly unreal.

Their auteur approach is exemplified in the film’s non-linear structure.

If your only exposure to spearfishing is through Instagram, you might think it’s something you do on vacation, glamorous even. However, throughout the film, as David pursues the unknown, we can see the struggles of a spearfisher – the miles he must walk back to camp due to the currents, the frustrations of trying to find support from locals, the sheer danger of shark encounters and the loss when “the taxman” takes a huge bite out of his catch. 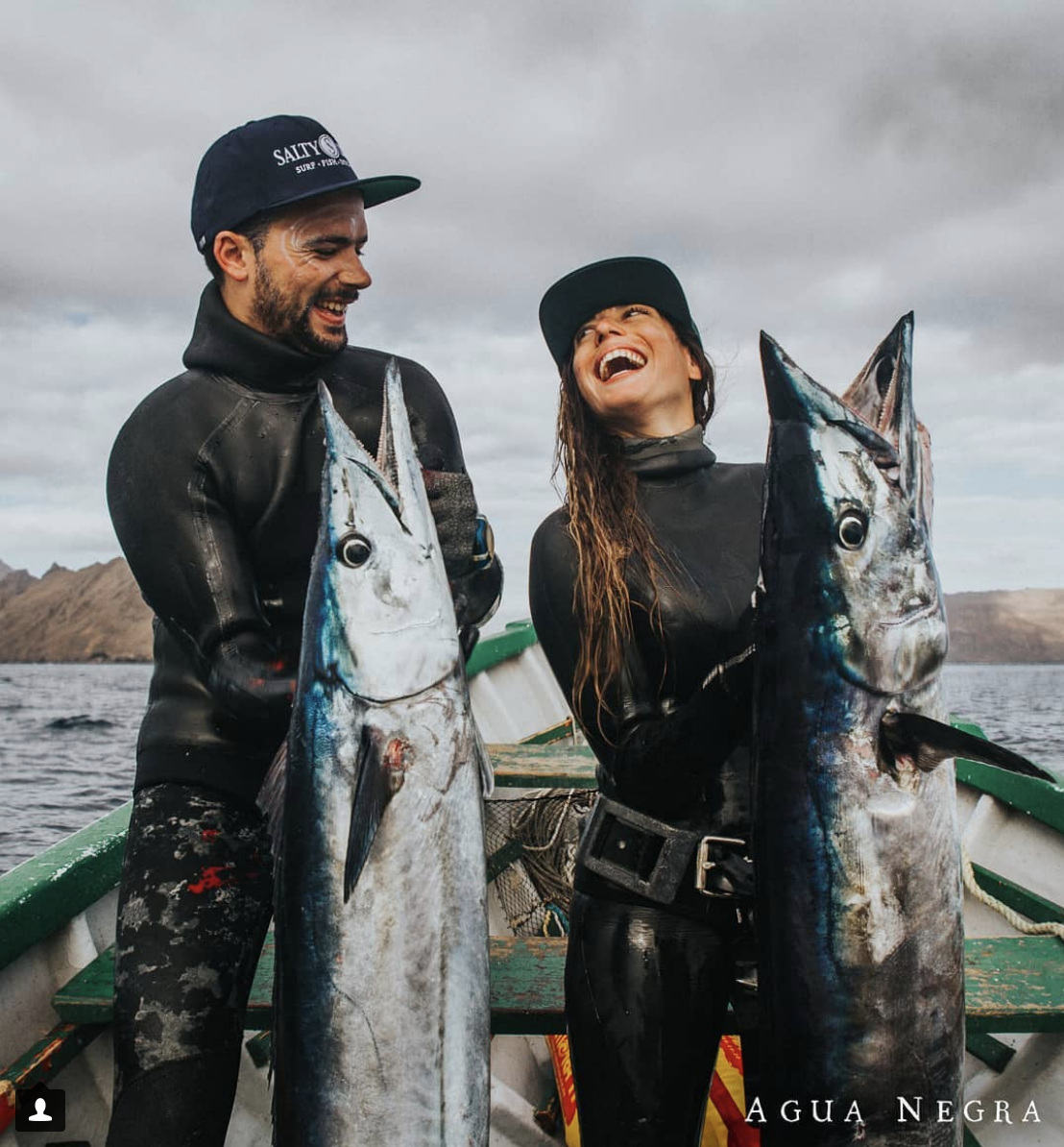 Filmmakers Ricardo Nascimento and David Ochoa have taken this project very seriously. Their auteur approach is exemplified in the film’s non-linear structure. Taking inspiration from Tarantino, the film is divided into non-sequential chapters that keep the audience engaged, unable to predict the story arch. David’s narration is introspective and unguarded.

There are several brilliant montages of colorful biodiversity and marine life.

The variety of shots in this film is impressive. There are several brilliant montages of colorful biodiversity and marine life. The wide shots introducing each new chapter are stunning, especially Chapter 3. In contrast, there are plenty of close-up spearfishing action shots and seamless switches from third person to POV underwater footage. During one scene where David wrestles a massive, six foot long fish to the surface, I had the strange thought that when I scratched an itch on my nose, my hands would smell like fish. 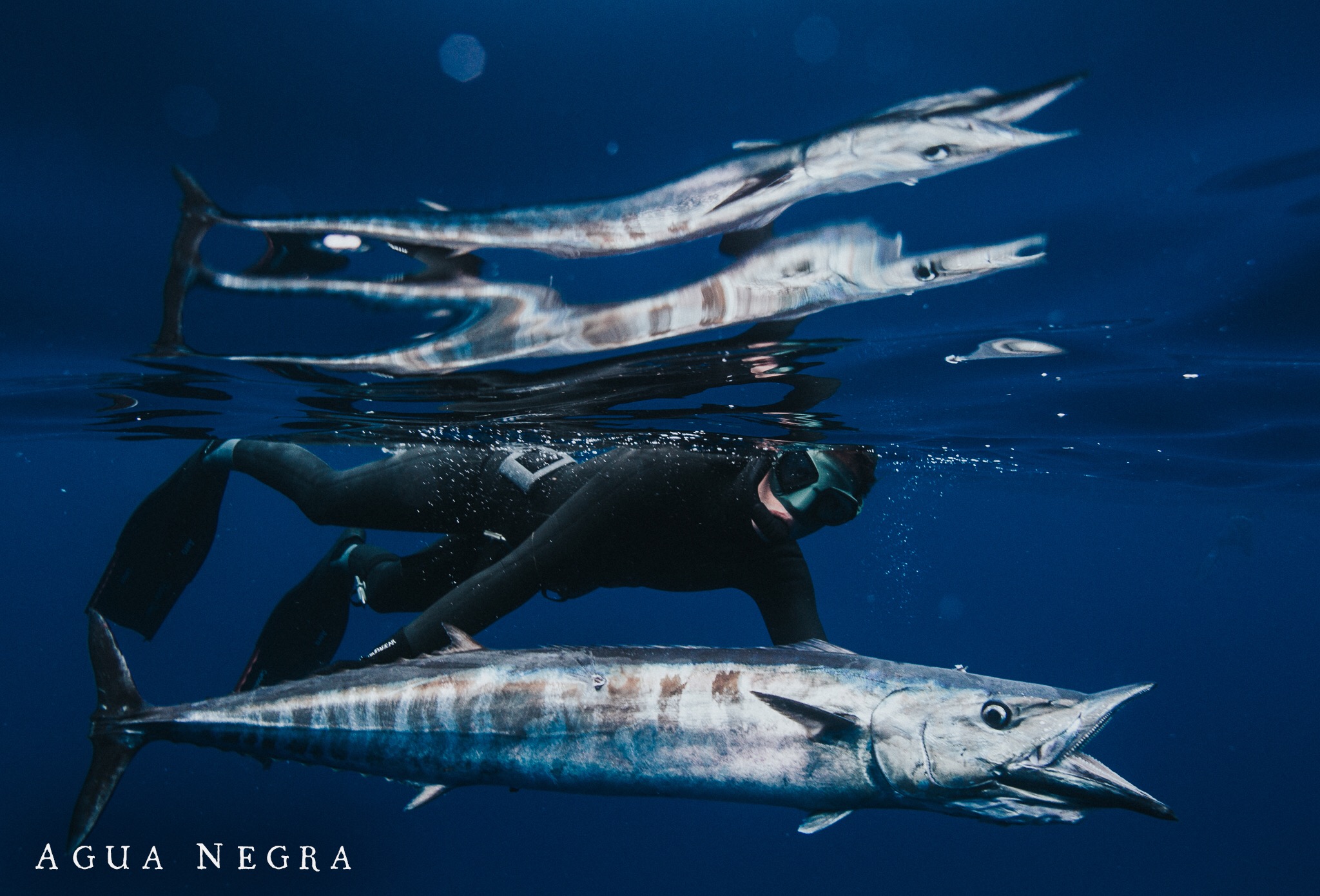 The sound design is top notch as well. As David narrates his story, you can faintly pick out subtle seagull noises and just the right amount of wind in the background. Also, that familiar “tang” sound of the spear hitting the rock triggered me to load up my spear and get in the water.

The professional quality color grading establishes deep saturations, with rich reds and vivid blues. However, the grading overall is too dark for my taste. The strong contrast and stylized grading may take away from the rugged realness of Cape Verde. Can it truly look that beautiful? 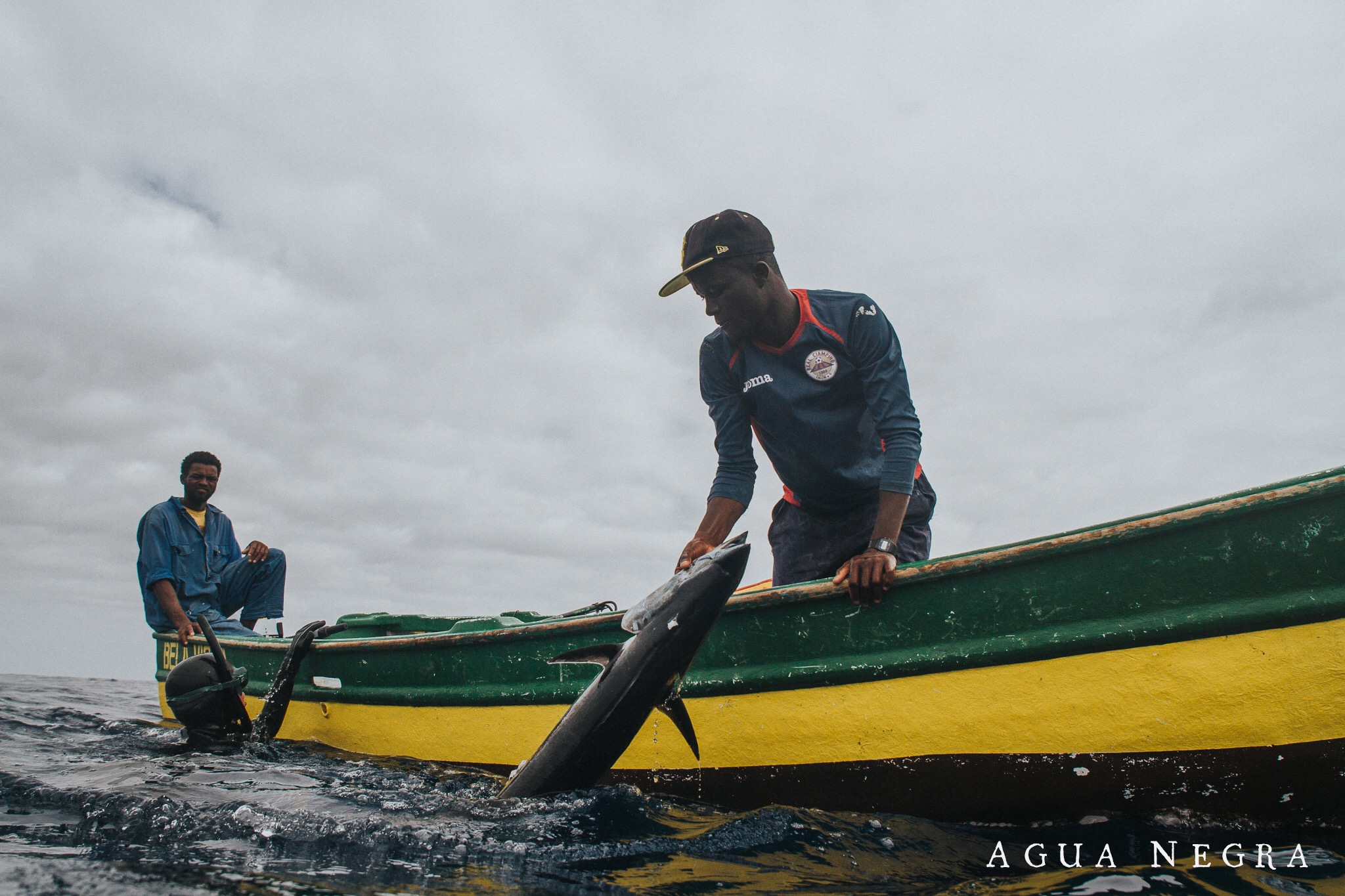 The film presents a solid profile and background for its central focus, David Ochoa’s search for challenging, yet rewarding spearfishing spots around Cape Verde. However, if I could impose myself in the editing room, I’d suggest a more balanced inclusion of Valentine Thomas, a world record holding spearfisher in her own right, who also has an inspirational background. 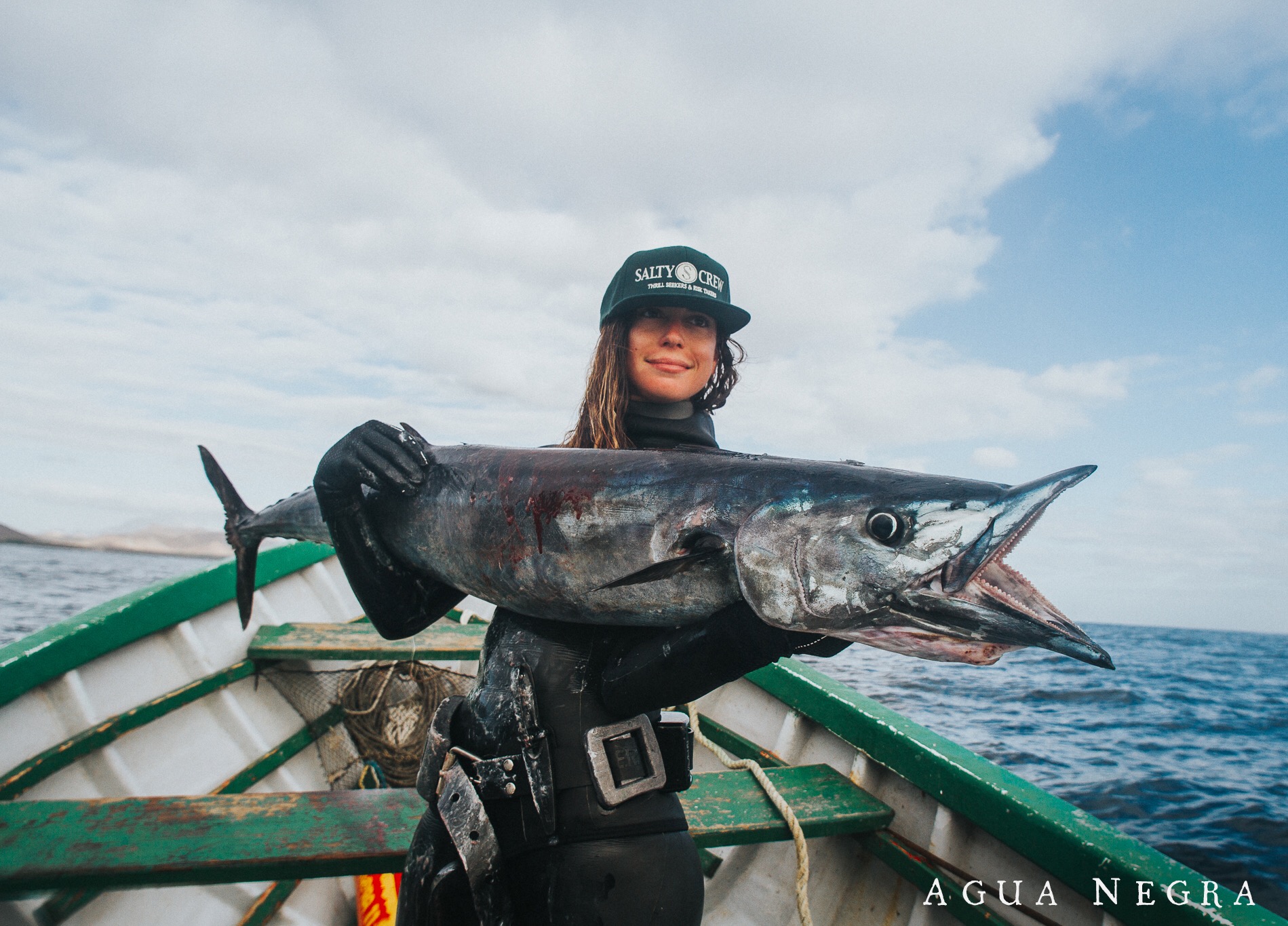 Moreover, because each spearfisher is covered head to toe in their wetsuit, mask and large fins, you can’t identify who is who underwater.

Read Next on The Outdoor Journal: Dive into the Deep Unknown with Kimi Werner, a 37-year-old Hawaiian professional free diver and a decorated spear fisher.

Dock6 Films impressively shows that a small crew and budget can result in high-end production.

Agua Negra is an absorbing, artistic film about spearfishing and chasing the unknown. Dock6 Films impressively shows that a small crew and budget can result in high-end production. For those with an adventurous spirit, Agua Negra’s story will draw you in. Although at some points I was confused whether the filming was taking place in realtime or whether the filmmakers went back to film a reshoot based on earlier experiences. Overall, even those who are completely new to spearfishing will appreciate the film’s sense of exploration and wonder.

For general information about the movie, check out the Dock6 Films website.

You can see more photos and footage on Instagram @aguanegrathemovie