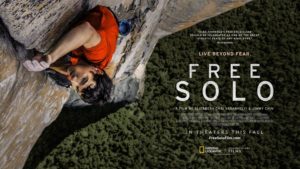 Free Solo: This Portrait of Alex Honnold, is so Much More Than Just a Climbing Film

How do you offer a balanced film review, when it's one of the best documentary's that you have ever seen?

Directors Elizabeth Chai Vasarhelyi and Jimmy Chin worked with National Geographic to produce hands-down, the best climbing movie that I have seen.

The film’s plot is centered around a single climb that Alex Honnold is preparing for. El Capitan’s 3,000 vertical-foot rock face in Yosemite, California. Solo. No rope. No safety net. Simply him and the rock.

To put this into perspective, for anyone who isn’t a die-hard rock climber, and can’t relate to this feat… imagine climbing a ladder twice the size of the Empire State Building. But instead of the ladder having nice, big rungs to hold onto, it has pebbles jutting out one centimeter (or less) that you are expected to rest your feet and hands on. Oh, and making a mistake, falling, is simply not an option.

The whole film leads up to the suspense of this one climb. Will Alex be successful? Will he complete the climb and become the first person to ever free solo the famous El Capitan? Or will he make a mistake and plummet to his death?

Even the seemingly very masculine man sitting next to me in the theater was falling into his seat with anticipation. He kept sinking further and further, at first I thought he was falling asleep, but when I looked next to me to check, he was gripping the armrest so hard his knuckles were turning white.

So, how did Jimmy Chin and Elizabeth Chai Vasarhelyi do it? How is it possible that even though I already knew the outcome of the plot, I was still so torn with suspense and anticipation that I experienced physical symptoms (sweaty palms, racing heartbeat) of anxiety?

The videography was superb. Every shot, every angle, every pan was thoroughly well thought-out. The crew was comprised of professional climbers with rope access skills beyond that which I am able to comprehend. Each camera on the wall was there because someone either climbed up the rock face to place it there, or rappelled down from the summit so they could dangle on a rope 3,000 feet in the air, for hours on end, in order to get the shot.

Even the soundtrack contributed to the suspense. Similar to any Hollywood-style movie, epic music would ring loud when a feat had been accomplished. When the story became tense, so would the music.

The production aside, the most exhilarating aspect of the film was the character development. It was a glimpse into the mind of a seemingly super-human individual. A mind that us mere mortals can only ponder about, but never empathize with or relate to. Alex’s emotional capacity is similar to that of his father, who as it turns out, had a mild case of Asperger’s Syndrome, a syndrome which tends to run in families. The film was a view into the relationship between Alex, this robot-like individual, and his girlfriend, Sanni McCandless, who is a seemingly strong-minded woman with a normal capacity for emotion. Their relationship dynamic is what separates this film from every other climbing movie out there.

With Alex’s inability to empathize with Sanni’s feelings, and Sanni’s attempts to understand Alex’s mind, the question comes up of how a relationship like this could work? But they make it work… and this is one of the most beautiful plot lines I have seen in an adventure film.

Find a theatre near you that is showing Free Solo, on the National Geographic website.