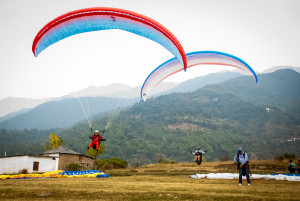 Anatomy of a paraglider

The nuts, bolts and canopy that come together to make a paraglider.

A week from now hundreds of pilots from across the world will compete in the skies of Bir-Billing for the Paragliding World Cup, India’s first. This is an aerial sport where the harness-strapped pilot experiences risk and excitement at the same time and with their understanding of the weather conditions they use a handful of strings to soar in the air for long distances.

So what exactly is a paraglider?

Paragliding is the easiest and simplest form of human flight, using air currents and shifting body weight to reach heights of big mountains. The roots of modern day paragliding lie in the concept of parachuting. But unlike parachuting, paragliders start on the ground with their modified parachutes (canopy) deployed. In 1960s military parachutists developed the skill of harnessing air currents and staying in the air longer. This led to the modification in the shape and design of the parachute and the invention of the first ‘ram air canopy’ in 1964 by Domina Jalbert in Florida, USA.

And in 1978 Jean-Claude Betemps, Andre Bohn and Gerad Bosson refined the technique of running and launching using their modified parachutes to jump off a mountain in Mieussy, France. This was the start of the art of paragliding.

The main component of the glider is the inflatable wing. It is designed on the lines of a parachute but unlike a parachute it is oval shaped. The canopy is made of rip stop nylon material which is a tear proof, tough and durable synthetic fabric.

The canopy is composed of two layers of the nylon synthetic fabric sewn together with a number of vertical ribs in the gap. Each rib is composed of dozens of cells that trap air and inflates the canopy, enabling it to glide or float. The windward side of the canopy is called the leading edge which allows air to enter the canopy. Experts believe that a canopy is good for 300 hours of flying before it starts to stretch and weaken.

The system of cords and cables attached to the underside of the canopy are called lines. There are usually around 4-5 rows of lines. The last row of the lines makes up the brakes or the control lines, which are attached to the trailing (rear) edge of the canopy. These cords are secured in a bunch on both sides of the pilot, and are called risers. The risers help a pilot to control and maneuver the glider by changing the direction and speed of the glider as it flies.

The lines are generally made of synthetic fibers such as Kevlar or Dyneema as they don’t stretch and shrink. The risers are fixed to carabiners which are in turn locked into the pilots harness.

It is a foot control mechanism that increases the speed of the glider by changing the angle of the canopy. It connects the harness to the canopy with the help of pulleys.

A pilot never flies without a helmet. It protects the head in case of accidents and also reduces wind noise and helps to communicate over the radio. Paragliding helmets are composed of two layers, an outer shell and an inner shell. The outer shell is composed of thermoplastic, composite fiber, or Kevlar combined with carbon fiber. The inner shell is designed to absorb most of the shock in case of a collision.

Other then these components of the glider, a pilot uses the following gadgets to help in flying:

An altimeter helps a pilot to assess the altitude gained. This helps the pilot to maintain a safe distance from the ground and other pilots. Altimeter measures altitude based on air pressure. They are usually digital and built inside a GPS or a digital watch.

Variometers help a pilot to assess the rate at which they are climbing or falling, relative to the ground. They are mostly used for thermal lifting. As the pilot gains a certain vertical speed the variometer starts to beep with an increasing pitch and decreases as the pilot sinks.

Pilots use radios to stay in touch with fellow pilots and support staff on the ground. It is very important to have a steady communication system for the safety and security of the pilot.

GPS helps in assessing a pilot’s speed and follow a set flight path. It also helps pilots to analyze their flight routes and flying patterns once they have landed. In competitive paragliding, a GPS is a necessary equipment to assess the flight route and timing of a pilot.

The above information has been sourced from How Stuff Works.