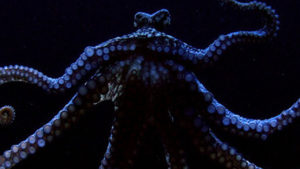 Deal with a Curious Octopus

A trip underwater can turn out to be a nightmare during a close encounter with an eight-legged creature. The Outdoor Journal suggests some dos and don'ts for such times

The deep sea is gorgeous- the corals, the fish, the sea weeds all seem to amalgamate and create a rather pretty picture. But the underwater world is not without its dangers. Apart from the colorful inhabitants, there also exist large predators and scuba divers have had encounters with some of the most terrifying sea creatures.

Something of the sort happened to ace divers from Eastern India, Mr Sabir Baksh and Mr Akmal, when they were diving at 22ft (eight meters) in the Kushabhadra River at the Ramchandi mouth where the distributary of the Mahanadi dips into the Bay of Bengal. The divers were filming for a patriotic video when an octopus (of the Hepalo Chlaena species) decided to join in on the fun. It went ahead and clung on to Mr Akmal’s back and no matter how hard he tried, the creature wouldn’t budge an inch.

Apart from being menacing in appearance, an octopus can possess a venom (for marine animals), which they inject through their nail-sharp beak. Although the poison is not generally deadly to humans, it is potent enough to paralyze us within seconds.

After grappling with it for close to 30 minutes, Mr Akmal chalked out a strategy. He swam to the surface knowing that octopi can’t survive sans water. As soon as he surfaced, the creature loosened its grip and swam away. But as though it had enjoyed the divers’ company a bit too much, it reappeared and clamped itself to their scuba scooter!

“It sat on the scooter as if it was ready to ride. We tried our best to shake it off, but our stubborn visitor changed position and sat on the front gear”, says Mr Baksh, a PADI (Professional Association of Diving Instructors) certified diver with over 15 years of experience. He has also done a number of diving expeditions in the Red Sea, Indonesia and the Andaman and Nicobar Islands- but this incident surprised him too and sent a jitter down his spine.

The Outdoor Journal spoke to Marine Biologist Mahima Jaini about the animal’s unprovoked behaviour and how divers should react at such times:

Octopi are naturally inquisitive creatures (apart from being massively intelligent). They’re known to approach divers mostly out of curiosity and usually not in an aggressive manner. In areas where spear fishing or octopus hunting is common, octopi may be shy and elusive but in areas where there is no such  threat it may be quite common to see them openly exploring.

-Moving away from the bottom or gently twisting the tentacles have been enough to trigger an octopus to detach itself from a diver. Octopi are benthic organisms that prefer to spend their time at or near the bottom.

-If an octopus attaches itself to a diver near the bottom, the diver should try and attempt a slow ascent, being further away from the bottom may give the octopus enough impetus to retreat.

-If this doesn’t work, gently twisting the arms seems to have done the trick in some cases. Care should be taken to maintain safe ascent rates and avoid any jerky or rapid movements.

-Their mouth is located at the center of their eight arms & contains a pair of sharp teeth known as the beak. Octopi bite their prey with this sharp beak.

Poisonous octopi inject their toxin into their prey via their bite. If an octopus has already latched onto you with its strong suckers, your only mode of escape is to gently get the animal off you.

If bitten by a poisonous octopus, the bitten area should be immersed in luke warm water which helps denature the toxin. Blue-ringed octopus bites that cause paralysis and respiratory failure should be treated with the pressure immobilization technique and immediate medical attention, artificial respiration should be provided until the effect of the toxin wears off.

A recent study showed that most octopus species contain poisonous venom and thus all octopus bites should be treated with pressure immobilization and hot water soaks.

Another thing to note is that when threatened, an octopus may eject a thick blackish ink. The ink cloud is used by octopi to ward off predators and is made up of melanin, same pigment found in human hair & skin, and thus is of no threat to us.

Mahima Jaini has a B.Sc. in Marine Sciences and a M.Sc. in Marine Biology, both from the University of Maine, USA. She has been scuba diving since 2008 & has close to 200 dives in temperate & tropical locations such as Maine, Norway, Chile, the Caribbean & the Lakshadweep Islands.

Currently she works as a research assistant for a Bangalore-based marine conservation and outreach NGO called Dakshin Foundation & is studying sustainable fisheries in the Lakshadweep islands.