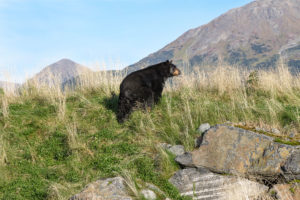 Denali National Park – How to Avoid Being Eaten by the Locals

The rules of wildlife etiquette in Denali National Park.

When hiking in Denali National Park, it is likely that you will come in contact with its residents. Along with all other National Parks in the United States, DNP aims to conserve and protect the wildlife that lives within its boundaries. When visiting, it’s important to remember that the park belongs first and foremost to its wildlife; the bears, moose, caribou, wolves and others that live there. Keep these pointers in mind to stay in favor with the locals and avoid getting mauled:

In the absence of lions and tigers, grizzlies and black bears are the kings of interior Alaska.

Rule number one: Always stay 300 yards (that’s three football fields) away from bears, and never surprise one. Bears will usually avoid human interaction (we suck and they know it), so make sure you’re making some noise to make your presence known when in bear country. If you’re in a group, talk to each other. If you’re alone, clap your hands or talk to yourself. This is especially important in areas with low visibility or while walking downwind.

Rule number two: Keep all food in bear-proof containers. Remember that bears need to fill up on food in order to hibernate. Interior bears are even hungrier than their coastal counterparts, because these bears do not have a steady stream of salmon to feed on. Not knowing where their next meal is coming from means that interior grizzlies are more likely to snack on humans or on human snacks, if given the opportunity. Bears have a heightened sense of smell, so if you have food on you they will smell it even if you’re 20 miles away.

Rule number three: If you’ve followed all the rules above but are still super unlucky and happen to surprise a bear by accident, it is important to 1) let them know you are human (speak to them) and back away slowly. 2) Do not run. Bears are curious by nature, so you don’t want to give them a reason to chase you. You will not win in a bear chase, an average bear can run at 35 mph, whereas Usain Bolt, the fastest human in the world once ran at 27 mph. You do the math. 3) Stand your ground. Grizzlies have been known to charge, but back away without making contact (a bluff charge), so please refer back to point two. 4) Do not drop your pack. Remember, bears are curious and they’ll most likely want to know what’s in your pack.

Rule number four: The only time you should consider fighting or playing dead is if a bear starts to in fact eat you. If a black bear attacks you, protect your head and neck with your pack; if you’re about to die, fight back. If a grizzly attacks you, play dead until the bear loses interest. Remember that playing dead could work with a sow, but might not with a predatory bear. Use your judgement, as every situation is different, and no method is really fool-proof. Follow these steps and you will most likely live.

Pro tip: Keep bear spray clipped to your belt. Don’t walk around with it in hand, ready to blow. More often than not, you’re going to spray another hiker or yourself. Bear spray is most effective when you’re already within 25 feet of a bear.

Moose look pretty innocent if you ask me. They have gentle faces and before I went to Alaska I hadn’t really heard many stories about moose attacks. This is why most people are lulled into a false sense of calm when they encounter a moose. Do not be fooled, moose are very dangerous. Just ask the three-legged sled dog I met at Iditarod champion Dallas Seavey’s kennel.

Rule number one: Always stay 25 yards away from moose. If you happen to come into unavoidable contact with one, back away and run. If a moose looks ready to charge, run away and hide behind a tree or anything that can act as a barrier between you and moose. You could even run zig-zag to confuse them since they can’t change direction quickly. Unlike bears, moose are not testing you when they charge. They will also more likely lose interest and not chase you too far.

Rule number two: Watch out for warning signs. If a moose has stopped eating to look at you and licks its lips/puts its ears back/the hairs on its neck stand, you’re annoying that moose and it will most likely charge you.

Rule number three: If a moose does end up knocking you down, get into fetal position and protect your head and neck. Do not get up until the moose has left; if it’s close by when you get up it could just knock you down again.

General Etiquette Tips
Riding in one of Denali National Park’s famous green buses is like being on safari in Africa. There’s a chance you will see a large predator (bears, oh my!), and then there are the less dangerous animals like Dall sheep and marmots. In general, always remember that all wildlife must be treated with respect, from a wolf to ground squirrels (they can get super aggressive about their nuts). Here are general etiquette tips to keep in mind:

1. Don’t invade their personal space. When you see professional close-up shots of wildlife, know that the photographer used a telephoto lens, and wasn’t actually that close to the animal. Use binoculars if you want a better look.

2. Don’t stare too long. Remember that creepy guy who stared at you too long on the subway? Do you want to be that guy?

3. Don’t feed wildlife. You may think you’re being nice, but you’re doing the animals, the Park, and other visitors a disservice by making wildlife associate humans with food. Even squirrels can be dangerous if they’re expecting to be fed all the time.

4. Most importantly, enjoy the experience, and do your bit to conserve the wilderness your favourite animals call home.

Read our comprehensive guide to Denali National Park in the upcoming Winter 2016 edition of our print magazine.