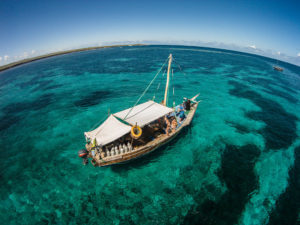 Despite its ominous name, this virtually unknown island has been discovered as a utopia for anyone willing to make the journey—a truly ‘off the beaten track’ experience and a scuba diver’s dream.

Dar es Salaam’s airport is not exciting at the best of times, but at 4:30 in the morning, once we had passed through immigration and been ejected into the airport concourse,  the only signs of life were a lady sweeping and emptying rubbish bins. It felt like we had arrived in a post-apocalyptic world. The handful of shops were all closed and we had to spend an hour or so sitting on the stairs outside the airport, waiting for the only “restaurant” to open its doors, until it was time to check in for our short flight to Mafia. ‘James from the UK’ summed up The Flamingo Restaurant pretty accurately on Trip Advisor when he wrote: “being clean and having many plug sockets are really the only two positives to this pretty dire airport restaurant”, which, though clearly not a great review, is decidedly better than ‘Lampan from Austria’ who had this to say:

“Looking for hell on earth? That’s as close as you can get”.

We, however, knew this would be our last time ‘roughing it’ before we got to the laid back luxury of the island—not even having to make our ‘breakfast snack’ last for four hours could dampen our spirits.

Our seemingly endless wait over, we eventually boarded our flight for the short hop to the Mafia. Most of the other passengers on our flight were headed further down the coast to the natural gas fields of Songo Songo and so only four of us got off when we touched down on the island.

We were collected and driven the 14km stretch of tar that represents the only sealed road on the island and to the ‘Mafia Island Marine Park’ gates, where we signed in and paid for our permits. This was our last taste of ‘officialdom’; shortly we would abandon our shoes and our cares, barely thinking of civilisation again until it was time to leave.

Contrary to any other thoughts that might come to mind, Mafia Island has nothing to do with the Mafiaosi; the Mafia Archipelago most likely got its name from the Arabic word ‘morfiyeh’ meaning ‘archipelago’, or possibly from the Ki-Swahili ‘mahali pa afya’, meaning ‘healthy dwelling place’. In fact, in precolonial times the island was known to the Portuguese and British as Monfia, and it was only after Germany took control of the island in 1890 that the spelling changed to Mafia. The archipelago lies just south of the Equator and is made up of a group of islands, atolls and tidal sandbars, scattered in the Indian Ocean off the coast of the Rufiji Delta in Tanzania. The largest of these islands is Mafia Island itself, which is approximately 50km long, 15km across and surrounded by a barrier reef teeming with marine life.

This is a virtually unknown destination, a jewel in in the Indian Ocean.

Picture perfect beaches and incredibly diverse marine life make it a divers’ paradise. With a total population of about 40,000 and annual tourist numbers in the region of 4,000, the island is one of the safest and quietest places in the Indian Ocean, virtually devoid of crime and free from the crowds and hustlers that can ruin a holiday in paradise.

Mafia is a remnant of the old Swahili coast. Very little is known about its early history, but it is believed to have been inhabited for a millennia. The first settlers are thought to have crossed from the mainland to the islands in the 3rd and 4th century. The Mafia archipelago is home to antiquities and ruins ranging from a barrel-vaulted mosque built in the 15th century to a number of well-preserved buildings of the latter half of the 18th century. Relatively recently, a discovery has been made of what appears to be a ‘sunken city’ off the coast. Some believe this could be the remains of a Portuguese fort that was washed away by the sea some time in the mid 1800s. A more tantalisingly hypothesis? One researcher suggests it could possibly be the ruins of the lost ancient city of Rhapta, dating back to pre 50AD. Although unfortunately, this is thought by most to be extremely unlikely.

From the sunbathers to the restless, what to do on Mafia Island:

Mafia has something for everybody. There is plenty to do, but if you want to lie on a beach and ‘do nothing’, you can. In fact, we met a French honeymoon couple doing just that! The newlyweds appeared to spend their time basking in the sun, with the occasional break to head out on a sunset cruise, an ‘introduction to scuba diving’ course or the occasional pampering massage.

My husband, unlike the French honeymooners, is ‘allergic’ to lazing on the beach; sitting ‘aimlessly’ on the sand makes him restless, fidgety and, in general, a pain to be around. Fortunately, we had no time at all to test his patience levels. Between boat trips, snorkelling, scuba diving, watching baby turtles hatch, a walking tour of a nearby island, long beach walks and more, we were kept very active. Don’t get me wrong, Mafia is the perfect place to relax and unwind. In fact, the ‘beach sitting allergic’ husband rapidly got into the habit of post breakfast naps, post lunch naps and even some pre dinner naps, while I occupied myself with some early morning beach runs and yoga.

Almost half the coastline of Mafia, about 822km², was gazetted as the first marine park in Tanzania by the Government in 1995. The Mafia Archipelago and the Rufiji Delta form one of the most interesting and diverse marine ecosystems and coral reefs in the world. Both the coastal and marine environments are protected by the presence of this Marine Park. The area has a high biodiversity and is considered an important habitat for endangered species like the dugong and a variety of turtle species. The immensely rich marine life makes for some of the finest snorkelling and diving sites in the Indian Ocean and beds of seagrass and the open waters around the islands support some of the world’s most endangered marine life.

To dive deeper into Sarah’s scuba adventures and all her tips, stay tuned for Part 2 coming next week!

We were lucky to stay in three beautiful places while on Mafia Island and each was unique and special in its own way:

Pole Pole is an exclusive seven bungalow eco-lodge, located inside the Marine Park, where we were pampered by the lovely Paola. Great cuisine, unpretentious and laid-back atmosphere, and warm but discrete hospitality.

Shamba Kilole Lodge is a 6 room eco lodge, on a five hectare plot inside the Marine Park, owned and operated by Marco and Francesca. Marco is known as the island’s most knowledgeable and passionate dive master.

Butiama Beach is probably the best value for money on Mafia. Owned and operated by the indomitable Maura and her husband, Butiama is the perfect place for families—with a seemingly endless expanse of pristine white beach just footsteps from your room.

Mafia Island Diving is run by the highly organised Danielle and multilingual dive master David, and is one of the longest standing dive operators on the Island. They offer scuba certification and both water based and land based activities. /