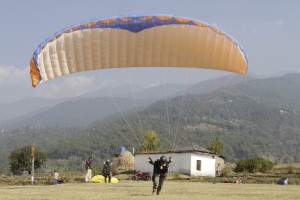 Be a part of the flying community. The Outdoor Journal tells you how

Paragliding is an aerial adventure sport, where the pilot footlaunches and freeflies an inflatable fabric glider wing. The pilot is suspended below the wing, in a harness attached by suspension lines to the canopy. Air pressure into vents in front of the wing maintains the structure, and air flowing over it creates lift. Skilled pilots can soar using thermals, and fly long distances, or perform incredible aerobatic manoeuvres.

The Outdoor Journal and PG-Gurukul collaborated for a paragliding clinic from November 2 – 7 in Bir-Billing, Himachal Pradesh, northern India. With the sprawling Dhauladhar ranges (also known as The White Range for its limestone rock topography) in the backdrop and a mood of spirituality around, thanks to the Bir Tibetan Colony just 2kms away, the horde of foreign nationals flocking this small hill town around the year, isn’t surprising. What draws the paragliding community here is the elevation gain and favorable wind conditions that suit a para-flight. The location being chosen for the recently concluded Pre-World Cup Paragliding Championship shows the popularity of Bir as a free-flying hotspot.

Gurpreet Dhindsa, a BHPA (British Hang Gliding and Paragliding Association) certified instructor and founder of the paragliding school PG-Gurukul, was the expert guiding the newbies. He has represented India at the Paragliding World Championships and World Cups in Russia, Turkey, Korea, Australia and many other countries. In his prime, he was ranked 120 in the world.

At The Outdoor Journal Paragliding Clinic, the aspiring free-fliers were all set for their P1+P2 certification course. Here’s what you’d have been doing if you were there:

The initial three days of the course were primarily on ground handling. The amateurs were told about the different components of the gliders, the linings, risers, breaks, harness and other attachments.

On day 1, you are told about the gliding equipment, it’s nomenclatures, design and other elements. Day 2 is all about inflating your canopy and stabilizing it with the wind flow and its directions. On day 3, if you’ve followed the instructions correctly and mastered the nitty-gritties of the trade, you get to do small hops on a tiny slope, giving you a few seconds in the air.

Getting into the details of it, you have to learn how to set up a canopy and the equipment, get yourself into position and then inflate the glider by pulling on the A-risers. As soon it inflates and is up, the pilot must drop the risers, stablize it sharply by damping the brakes and then running off the hill.

For ground handling, that’s pretty much what you have to master. You have to be very comfortable with the way your canopy behaves with you, as once you’re in air, you can’t be clueless about what’s happening with your equipment.

After 3 days of intense training and technical know-how, you get your first solo flight on Day 4. You’re taken to a hillock at Dhelu, some 13kms from Bir. The flight takes you to a vertical elevation of 120 meters. During the shuttle, you’ll have two instructors – one at the take off and the other at the landing zone – giving you instructions on a walkie-talkie that’s strapped onto your harness. The idea of assisting you with a radio is to make sure you do as instructed. For instance – pick up the glider, make sure that’s it’s stable, etc.

If everything goes by the plan, the instructor gives a green signal and you take off. If, by any chance, you fail to get a proper launch, he’ll order you to stop and abort the launch.

Picking up the glider is a difficult technique to learn initially.

A quick chat with Lorenzo Fornari, one of the students, after his first solo flight:

Lorenzo: It wasn’t perfect technically but it met my expectations for the excitement and possible complexity as one would expect from a first time launch down a hill face littered with boulders and other obstacles that can lead to a very untimely trip to the local hospital. As for the flight itself, the launch was perfect, the thrill of flying was incredible, controlling the glider was as expected, the landing was a little rougher than expected. I sprained an ankle as I grazed a boulder upon touchdown. At least I didn’t hit any of the goats. Then again it would’ve possibly made the landing more comfortable. For me at least! So in the end it wasn’t perfect by far, but it was a hell of an experience.

Lorenzo: Yes. There are lots of factors to keep in mind when learning to fly. Gravity, especially, is rather unforgiving and until further notice, unhealthy from a certain height. Gurpreet was a great and very patient instructor and after 3 days of quick launches, exercises and a tandem flight from the top of the mountain (scary as hell to be honest but then after made me even more determined to do the course) felt confident enough to do a first solo flight.

# What went through your mind before/during your flight?
Lorenzo: Running and at the edge of the hill telling myself “Fly, you fool!!!”. Followed by “Oh my, I’m flying!!!!”. And in the end, “Good lord, how do I land this thing?!”