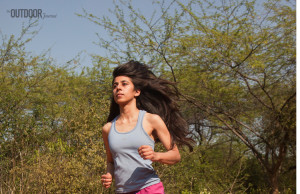 How to prepare for your first half marathon

Training for a semi-long race can be an arduous endeavor.

However, unless you have serious injury, anyone can do it. Yes anyone. All you need is a proper preparation.

Running is one activity which everyone has practiced at some point or the other in their life, but may be not considered taking it up seriously. For a beginner, it is very important to adhere to certain dos and don’ts before you embrace running. To learn more about how you should train for our first half-marathon, we had experienced runner and editorial director of The Outdoor Journal Gael Couturier (having run lots of half-marathons before moving to bigger distances) share his tips with us:

– Let’s say that for any average runner, a half marathon would take at least 2 hours to finish. While training for it, aim at just finishing it. That’s why the goal is to be able to run at least for an hour, an hour and a half non-stop, without any breathing or muscular problem.

2. What about mental preparedness?

– There’s nothing called mental preparedness for such short distance. It’s mostly physical. Train for at least 2-3 times a week, for two months and you’ll be good.

No. You sure have to gradually build up your fitness for such race but you don’t have to run a 10 k first. It may help, for sure, but it’s not a compulsory passage. It might take you 6 month, a year, may be more, depending on your actual fitness. Don’t expect to be able to finish a half-marathon before you’re able to run an hour and a half non-stop (unless you plan on walking a lot – but then you won’t be able to claim you’ve run a half-marathon right?). So, ideally, if you run 2-3 times a week for at least two months and include a long run on weekends, I believe you’ll be fine.

4. Is there a standard gear for running?

– Shoes, proper running shoes. Without getting into much detail, consider that the more expensive the shoe, the better quality it would be. You can of course still run with cheap running shoes, that’s your call, but remember that good quality shoes will have proper cushioning and stability to protect your bones and tendons. The current minimalist trend or the barefoot trend can be considered, but only with extreme care. Meaning : only experienced and/or careful runner should tackle that. Minimalism is fun and trendy but it can result in bad injury if done too intensely.
The lighter you are, the less concerned about those shoes issue you should be. You can basically wear any shoe. No matter what your level of fitness is, I strongly advise you to consult a sport physician before you start training for such serious distance.

5. Coming to diet, what kind of a diet should a person follow.

A balanced diet should do. Avoid fat and sugar as much as possible.

6. Runners eat energy bars and gels a lot while running. Does it make a huge difference in your performance? And is there an alternative to those bars and gels for those who can’t afford?

– It’s a good thing to use those for training or racing but it’s only helpful on long distances, let’s say over 10 km. They are scientifically made to supply sugar to your muscles quicker but alternately, bananas and dry fruits would also do fine.

7. How enduring is a half-marathon for a first timer?

– All depends on how well you have been training. It can be hell if you’re fat and totally untrained. It can be a piece of cake if you’re light and have trained properly. “Train hard, war easy!” – as they say in the French Foreign Legion! I use this motto all the time because it works.

8. One more piece of advice for a first timer?