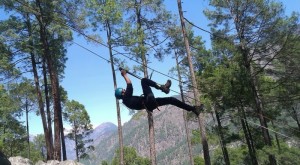 Save lives in the Himalaya – Search And Rescue at NIM

This is what he learned.

Life and death are closely linked in the mountain world. Most experienced climbers have had a few close calls, and know that saving a life on a climb is of much greater importance than summiting a peak.

However, getting into the course is only possible with an ‘A’ grade in the Basic and Advanced Mountaineering courses in any of the institutes. Luckily, our own mountain reporter Yogesh Kumar had his ‘A’, and spent the spring of 2015 learning to become a SAR expert. along with 29 others from 15 states across the country – including two women. Here is the first of his two-part report from NIM.

An exercise routine at 6:30 am kicks off the day that includes downhill running and uphill walking around the NIM campus’ hilly terrain. This sounds more pleasant than it is in reality. After a light breakfast, the NIM stores issue the students gear for the duration of the course: carabiners, ropes, slings, two ice-axes, a down jacket, mountaineering boots, rock climbing shoes and more, filling our packs to the brim and leaving little space for anything personal to be carried up into the Himalayas.

After lunch, a map-reading session was later put to test when trainees were asked to find the NIM institute’s coordinates. Confusion broke loose in the class and a few resorted to their smart phone’s GPS. Each rope team (a group of six students) got a map to revise at night as homework. A basic first-aid lecture at 6pm that evening covered the rudimentary knowledge of stabilizing and evacuating a victim from the danger zone, before the arrival of any professional medical help.

Two more trainees joined the group today, taking the total to 30. The day started with a steep uphill jaunt almost 450 vertical metres uphill from the institute to 1589m, with a fully-loaded pack at 6:30 am. The idea was to identify any issues in the pack and loading, that could otherwise create problems in the high mountains. Today’s classes started with revision of rope knots, radio communication procedures, and how to communicate using a satellite phone. This took up the morning, and a quick lunch later, we had a lecture on CPR (Cardio-Pulmonary Resuscitation) and general first-aid. The evening was a bit more relaxed with a film on the history of Himalayan mountaineering, and the origin of the Indian Mountaineering Foundation (IMF).

NIM courses are fairly tightly regulated, run mostly by the Indian military, and there isn’t much free time outside the tight structure of the classes. But that evening, we got an outing to the Uttarkashi market for two hours, where the students binged on the basic junk food this holy town had on offer, knowing well that we would be at the mercy of the canteen chef once we left for the high Himalayas.

We woke up again bright and early to the infamous NIM instructors’ whistle. A 7-km trek with loaded rucksacks to the nearby Tekhla rock-climbing area roused weary muscles, though light stretching exercises along the way helped tide over the pain. After a quick breakfast at Tekhla, we tackled a couple of boulders and did a single-pitch climb. The idea was to get our hands acquainted with rock with the perspective to learn and practice rescue techniques on rock faces. The rescuer may have to carry out a one-man rescue, or a group rescue, perhaps rig a Tyrolean rescue, or use techniques where the expert has to jumar with the victim’s body tied on an improvised stretcher.

It was helicopter rescue day. The trainees were taken to the Indo-Tibetan Border Police (ITBP) station in Matli,  15 kms from the institute, where an Indian Air Force (IAF) helicopter would come. We pounded the ITBP Commanding Officer (CO) with questions on the life of the para-military force personnel and he patiently helped as much as he could.

Two hours later, the distinctive sound of an incoming helicopter from indicated its arrival from the south-west. The IAF’s ‘Dhruv’ helicopter with three personnel demonstrated rescue techniques: winching up a casualty, their method of conducting high altitude rescues and their individual roles in it. The IAF instructors gave recent examples of rescues conducted during the 2013 floods in Uttarakhand. We returned to the institute and after lunch, sat through a class on how to use GPS device for rescues and how not to get ourselves lost in the wilderness!

The evening turned out to be a cinematic treat from the institute with the screening of Everest – a film about the Everest summit of Jamling Norgay, the son of mountaineering legend Tenzing Norgay.

The walk to Tekhla was not as exhausting as the first time; my body was getting used to the battering of the course. After breakfast, we launched ourselves into what turned out to be to a very tiring day involving numerous rescue techniques on rock faces. This included things like “piggy-back rescue”,  one-man assisted rescue, chimney rescue, unconscious victim rescue among others. The methods were not only applicable in the mountains, but usable anywhere during various emergencies. Back at the institute, there was a lecture on International distress audio and visual signals for victims in the wilderness.

The days’ slogging must have burnt hundreds of calories and my muscles begged for rest. Both these issues were addressed with dinner and an early sleep  to wake up early for yet another walk to the Tekhla rock area.

Our last walk to Tekhla rock area was under a light rain, and after lunch, we ran to cover our rucksacks lest they get drenched in the downpour. We practiced techniques like rescuing an immobile victim from a rock face, and cliff rescues. On returning to the institute, the training focused on tripod rescues (used for confined spaces). Any day when classes ended early meant a dash to the canteen for the momos (Tibetan steamed dumplings at the only private cafe in the NIM campus) and shopping for mementos at NIM’s souvenir store.

Our day’s lesson began with a mock drill of evacuating a casualty from high in the mountain. A situation was given to us along with the co-ordinates which we had to de-plot on the map to find the casualty and bring down to safety. The situation required us to assess the possible reason of the accident and carry first-aid and medicine accordingly. The Institute’s height above sea level is nearly 1200 mtrs and the mock casualty was at 2056 mtrs. The route involved a rigorous trek which turned more difficult due to the overnight rain. A trainee was the dummy victim and the task was to transport the injured person on an improvised stretcher and carried turn by turn by each trainee. There were few slips and falls in carrying the victim down a very narrow steep trail but teamwork got the job done.

In the morning, we left by bus for a 10 km drive to the banks of the Bhagirathi River, to work on rescues across river crossings. After establishing a base and learning to secure and carry the victim through various methods, we jumped into the chilled glacial water, also a part of our training, to get to the other side of the river, secured with a rope.

It was our last day at the institute itself. The next day we were off to the mountains, to learn advance search and rescue in snow and ice, including crevasse rescue, avalanche rescue and medical emergencies among other aspects of this critical training.

The second part of this blog will feature SAR techniques for high-altitude mountaineering!