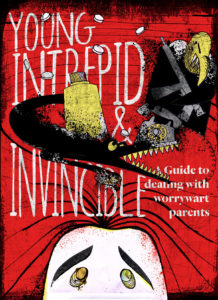 Young, Intrepid and Invincible: A Guide to Dealing with Worrywart Parents

It’s normal: parents worry. As the mother of two fearless children, I am not new to being on the verge of a nervous breakdown while my kids are off doing high-risk activities around the world.

This article originally appeared in print, in the 2014 Spring issue

In the summer of 2013, my son Callum Strong took part in the British Universities Kayak Expedition. Callum and a team of 4 other gung-ho young kayakers headed off to Pakistan for the summer to tackle some exciting rivers.

Was I worried? You bet!

So, if you are heading off into the great outdoors with your mates on an exciting expedition, here are some tips on how to help your parents survive your adventures:

Chances are that your mates’ parents will be as worried as yours. Put them in touch and help them establish a Mothers’ support group like we did for the BUKE expedition. We reck- oned that keeping in touch with each other would probably be easier than keeping in touch with the team, and if anything went wrong we would be able to join forces to help if required, or at the very least moan to each other or send Valium. (It was called the Mothers’ support group because it seemed to be mostly the Mums who were worried. If the Dads were worrying, they certainly were not letting on…)

The BUKE expedition was initially planned for a part of northern Pakistan where, three weeks before the eventual start-date, the Taliban would kill 9 climbers. Already apprehen- sive about the choice of destination, we were hugely relieved when the team decided to shift the expedition to Ethiopia. It was the comparison by Bonnie Maggio between the two places that made it palatable that they were going to spend the summer exploring the wilds of Ethiopia tackling previously un-kayaked rivers (un-kayaked for a reason one wonders…) whilst brushing shoulders with crocs and hippos. Phew.

Gone are the days when you can take off and be incommunicado for weeks or months on end. I have always said I don’t mind what my kids are up to or if I won’t see them for months on end just as long as they let me know what they are doing and roughly where they are (hint: this works equally well with girlfriends as it does with mothers). Try to communicate often, but spare us the graphic photos and grid references that lead us wide-eyed on google Earth.

Keep it simple. A text along the lines of “still alive and in Ethiopia” works well enough. You can tell us all about it and how scary it was when you are safely at home sitting at the kitchen table having a cup of tea. The exception to this is we do like to know if you injure yourself, in case we need to start saving for unexpected costs. If you end up in hospital with Malaria, please tell your mother (yes, i’m talking to you Callum).

MAKE USE OF YOUR PARENTS

Giving your parents jobs makes them feel less helpless and also minimizes worrying time. During the BUKE expedition, various parents helped out with medical advice, communications updates, and even arrangements for transportation and security on the ground.

REMEMBER: WHAT GOES AROUND COMES AROUND

While my son was off in the wild, I made the mistake of expressing my anxieties to my own mother. “Now you know how I felt,” she said, reminding me of the 6 weeks she didn’t hear from me when I took off, aged 18, hitchhiking to Turkey with my best friend. Mum very nearly got Interpol to find us. And then there was the time I set off to cross the Atlantic on a yacht with a bunch of friends in less than perfect weather and didn’t get in touch for weeks. Or, the real jewel in the crown of parental torture, the time I decided to go exploring from the Caribbean to the south Pacific on a hand built tiny catamaran with a mad French anthropologist that I hardly knew.

So bear in mind that you may be a parent one day and the likelihood is that the adventure gene will be passed on and you, too, may spend long spells of anxiety whilst your offspring are out there risking life and limb in the pursuit of adventure.

However scared or anxious your parents are, they are most likely still amazingly proud of you and they wouldn’t want it any other way. I know I am, and I look forward to hearing my son’s plans for the next expedition, although I would like for my daughter to get back in one piece from her season in the Alps first! Get out there and have FUN!

This article was part of the Newbie section in Issue 4 of our print magazine.