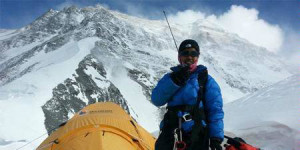 At 13, Indian girl is youngest to summit Everest

Hailing from a small village and impoverished background in India’s newest state Telangana, Malavath Poorna wants to inspire others to be achievers.

On May 25, Poorna entered the record books when she stood on top of the world’s tallest mountain to become the youngest girl to achieve the feat.
[youtube http://youtu.be/qF3UUcgpLUk]

For Malavath Poorna, climbing Everest wasn’t the biggest challenge of the expedition. The trial for the sprightly but frail looking girl was to consume packed food, which is one of the main nutrition sources during the climb of the 8000er.

“I could not bear the smell of it. I lived on soups because they were not packaged,” she told The Outdoor Journal about her abhorrence for packed food.

Poorna, from a nondescript village called Pakala village in Telangana in Southern India, rewrote records books when she became the youngest woman in the world to climb atop Everest on 25 May 2014. She was accompanied to the peak by Sadhanapalli Anand Kumar, a 16-year old boy from the same village. They were part of the 52-day expedition sponsored by a government-run welfare society.

Together, they summited Everest via the North Ridge route. Since Nepal law does not allow people under 16 years to climb the mountain, they climbed from the Tibetan side, as opposed to the more popular Nepal side.

The two were amongst 20 selected to receive training in mountain climbing at the Himalayan Mountaineering Institute (HMI), one the the best mountaineering institutes in India. They received an ‘A’ grade license for successfully climbing Mt. Renock in Kanchenjunga range of Himalayas. After another round of training in Ladakh (north India), they were selected for the Everest expedition.

The expedition was part of an initiative called Operation Everest, co-sponsored by APSWREIS, a welfare society based in Andhra Pradesh in South India. The initiative was launched with a purpose of promoting rock climbing amongst underprivileged children. After several training sessions, Purna and Anand were considered skilled and tough enough to scale the world’s highest peak.
Born and brought up in a tribal community and with no antecedents to mountaineering, Purna showed tremendous courage and toughness throughout the expedition.

“Being a tribal girl, I wanted to prove that girls like me can do anything. We are no less than anyone and that was the aim of my expedition,” says Poorna.

She plans to join the administrative services  of the Indian government and plans to climb more mountains.

Prior to their training in mountaineering, Purna’s climbing partner Sadhanapally Anand was more familiar with fixing the flat tyre of a bicycle than knowing anything about fixing a line on a mountain.

Despite barely making ends meet to survive, Anand’s parents did not let poverty get in the way of his upbringing. They completely supported him in his entire journey to Everest. Anand’s grandmother passed away during his expedition and his parents chose not to break the news to him, so that he could focus on his mission.

“There were many challenging moments during the climb. It is a death zone – the three toughest things were braving the cold, the climb itself and eating packaged food. I survived on muesli, milk and chocolate,” says Anand, not mincing words about his dislike for high-altitude menu.