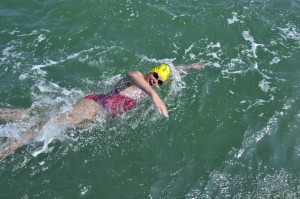 Covering more than 115 km in under 37 hours, ultra-marathon swimmer Chloë McCardel completes a non-stop triple crossing of the English Channel.

She is the first Australian and fourth person in the world to complete such a feat.

There is no stopping this Aussie. After snaring a world first with three single crossings of the English Channel in under a week, ultra-marathon swimmer Chloë McCardel has become the first Australian to complete a non-stop English Channel triple crossing, being the fourth person to complete such a feat worldwide.

This is the first successful attempt at a non-stop triple crossing of the Channel in 25 years. Previous record holders include British long-distance swimmer Alison Streeter who completed the three-way swim of the Channel in 1990. At the time, she was the first and only woman to have achieved this. Chloë is the second.

“This success has been a long time coming, and even after setting the world record in the Bahamas last year, the seas and cold water of the Channel made that final crossing to France the toughest I have experienced.” an exhausted Chloë was quoted in a press release.

According to the release, Chloë set-off from Dover on the English Channel coast, joined by her husband and ‘Number One’ supporter Paul. From then, she aimed for Cap Gris Ney on the coast of France, where Channel swimming rules only allowed her to break from swimming for 10 minutes. She elected to take shorter breaks.

The release goes on to describe her individual crossings. Chloë’s first crossing was completed in 11 hours 34 seconds. She returned to the water for the second leg, again stopping only briefly on the shores of the UK after swimming 11 hours and 8 seconds before making her final swim back to France. Her final return swim to France was timed at 13 hours 30 minutes. Over the more than 35 hour swim, she was allowed to tread water in order to eat specially prepared food and drinks, but was not permitted to touch her support vessel at all.

Chloë completed three separate crossings of Channel within 7 days last month as part of her preparation, and then spent up to 20 hours swimming in Loch Ness Scotland to further acclimatise herself to the chilly water of the English Channel.

Chloë previously set the world record for the longest unassisted ocean swim of 124.4km in 41.5 hours in October 2014, ratified by the Marathon Swimming Federation. She also holds the record for swimming 60 laps, the greatest number non-stop, across Bondi Beach, being 48kms, in 11 hours 42 seconds.

She will now spend the next few days recovering while also undertaking medical checks, and will return to Australia once she has been cleared by the medics to travel.

(The Feature Image is of a previous Channel swim)

Checkout the Opening Feature exclusive on Chloë McCardel in Issue 08 of our print magazine, in select adventure outlets and bookstores.