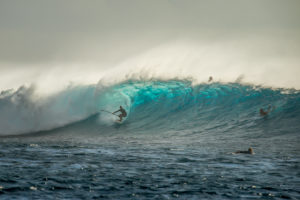 The 2016 Fiji ISA World SUP and Paddleboard Championship is set to kick off on Saturday, 12th November.

26 nations have confirmed their participation for the event.

All 26 National SUP and Paddleboard Teams featuring 244 athletes have announced their rosters to compete in the SUP Surfing, SUP Racing and Paddleboard Racing disciplines for the week of competition to come.

For a full list of team rosters, visit: http://isaworlds.com/sup/2016/en/teams/

A tradition that usually features sand from each nation, the Flags of the World Ceremony will unite the flags of every nation in a container to respect the restrictions of bringing foreign sand into Fiji. This ceremony symbolizes the peaceful gathering of nations of the world through SUP.

Representing the global growth of the sport of SUP in non-traditional nations, India has fielded a team in an ISA World Championship for the first time in history. Two Indian athletes, Sekar Patchai and Tanvi Jagadish, are confirmed to compete.

“I feel really good to represent my nation of India. This is my first international and ISA SUP competition.

“SUP is growing in India, especially with the girls. Every year the number of girls competing is increasing along with the number of competitions in our national championship tour. With this opportunity provided by the ISA, more girls will be inspired to practice SUP and Surfing.”

“As the globally recognized World Governing Body for SUP in all its variations, the ISA is proud to bring the 2016 Fiji ISA World SUP and Paddleboard Championship to Fiji for the first time. It is a great step forward for the sports of SUP and Paddleboard. The crystal clear waters of Fiji and the powerful waves of Cloudbreak will provide the perfect platform for the world’s best SUP surfers, SUP racers and Paddleboard athletes to push the limits of these sports.

“This event features true Olympic spirit with athletes from all five continents representing their nations.  It’s another stepping stone in our vision and push for SUP’s Olympic inclusion.”

The 2016 Fiji ISA World SUP and Paddleboard Championship will be a Deep Blue Surfing Event, which means that it has set a clear path for reducing environmental impacts.

The event will focus on diverting waste primarily from the boats, Opening Ceremony and the island of Tavarua into recycling and compost. Additionally, the event will be carbon neutral through a partnership with Starboard and the Thor Heyerdahl Climate Park in Myanmar, which will offset the carbon footprint of the flights, lodging and food through the CO2 that is absorbed by planting Mangroves.