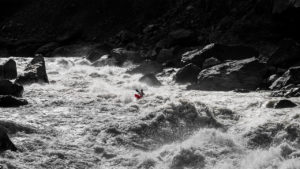 The Whitewater Awards is a gathering of the world’s best kayakers to show off the biggest and best things that have happened in the sport over the past year.

To be considered for an award, athletes, photographers, and filmmakers submit media taken over the past year that they believe showcases the best progression in the sport.

There are sixteen different categories for submission, including separate male and female categories within the “Best of” kayaking categories. Categories include Photographer of the Year, Film of the Year, Expedition of the Year, Best Trick, Best Line, River Stewardship, Grom of the Year, Rider of the Year, along with several others.  Awards are decided upon by a voting process done by the Association of Whitewater Professionals.

The race takes place on Jacob’s Ladder rapid, which is a rapid so difficult and consequential that most kayakers feel accomplished simply by surviving the rapid, much less racing the rapid. Nouria Newman, a 3-time NFC racer and winner of this year’s Whitewater Awards Female Rider of the Year describes it well,

“The NFC is the hardest race in whitewater kayaking. [Jacob’s Ladder] is a scary, consequential rapid. Running it is challenging, and it only gets harder to race it and make the gates.”

In order to minimize the risk involved in the race, event organizers have developed a strict qualification process for racers. 30 racers will qualify to race Jacob’s Ladder. Ten of them are pre-qualified from placing top ten at the event the year before. Those ten then read numerous athlete applications and vote on the next ten racers who will join them.  The last ten racers are decided through a qualification race on S-Turn rapid, another one of the North Fork’s infamous class V rapids.

Every year on this same weekend in June, kayakers, photographers, and filmmakers from around the world flock to Idaho to celebrate quality whitewater, progression of the sport, and the community that surrounds it. Both the North Fork Championship and the Whitewater Awards had great turnouts of athletes and spectators this year.

The finalists of each category in the Whitewater Awards were presented in film format at the Egyptian Theater for the entire audience to view, with the winner being announced live. Winners were presented with an award and expected to give a short speech at the event. The big winners of the night were Nouria Newman and Benny Marr, who were awarded with Line of the Year and Rider of the Year in the female and male categories. Nouria says that voting for the “best” in each category is a challenging process, “…voting is always tricky, (look at both French and U.S. presidents, not too sure if they are really the best available option). And it is also very hard to compare lines and rapids. What’s bigger? What’s harder? I got voted Best Line of the Year with a good line down Parque Jurassic, a long technical rapid, but Rata’s line down Graceland, which is a huge slide, was equally as good, if not better.”

No matter how tricky the voting process can be, Nouria agrees that the Whitewater Awards plays a large role in the progression of the sport, “I think it’s super cool to see what people can do in their kayak, how they push the limit of the sport and how they open new possibilities.”