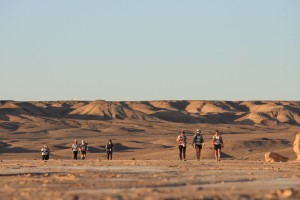 14 years and 13 countries after its inception, the 4 Deserts Race Series is reaching an incredible milestone this June when it hosts its 50th 155-mile self-supported footrace.

Founded in 2002, the 4 Deserts organized its inaugural event in 2003 near the historic city of Dunhuang, China, where hundreds of locals arrived by motorbike, horse, foot and donkey to watch an international group of 40 competitors set off from its starting line.

Aptly, the 50th race will return to the Gobi Desert, this time based outside the city of Hami in the Xinjiang Province of western China.

To date more than 7500 individuals from 100 countries have competed in the 4 Deserts, supported by 1000 volunteers, 400 medical doctors and 3500 local staff.

Each of these races was established in the years following the first Gobi March, with locations chosen specifically for their qualities of being the windiest, driest, hottest and coldest deserts on earth.

With the exception of the Sahara Race where political instability has, in thelast few years, caused the race to change location from its home in Egypt, the hot races take place annually in their home countries. The race in the cold desert of Antarctica takes place every two years.

For further information on the 4 Deserts Race Series, checkout www.4deserts.com or contact info@4deserts.com.

From a Press Release