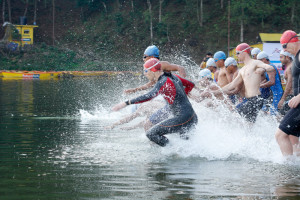 Participants from around the world are gearing up for the 4th edition of the Himalayan Rush Triathlon, set to take place in Pokhara, Nepal on March 28.

Himalayan Rush is now less than a month away and participants from around the world are getting ready to compete in its fourth edition. The triathlon has seen three successful previous events. Set in Pokhara, surrounded by the energy of the Himalaya, the triathlon was born of a love for Nepal.

The destination triathlon will be held at Begnas Taal, one of Pokhara’s fresh water lakes. At a relatively low altitude, Pokhara offers a sub-tropical climate all year. Participants will be able to stay warm, even as the icy peaks of the world’s highest mountain range towers above.

Last year’s event had participants from India, Nepal, Hong Kong and Singapore amongst other countries. The triathlon saw a range of athletes at different levels of experience. Of those present were Aman Puri, a student and Brand Ambassador for Merida Bikes India who is training for Ironman Australia 2016, as well as Jimi Oostrum, who is the Education Consultant for UNICEF Nepal. Both athletes will be returning for Himalayan Rush 2015, along with many other first-timers and triathlon enthusiasts.

Organised by a team of endurance sports enthusiasts and supported by Nepal Triathlon Association, Himalayan Rush also has Fantastic Nepal (a destination management company) and Dr. Khagendra Bahadur Shrestha Sports Foundation (the medical sponsor) on board.