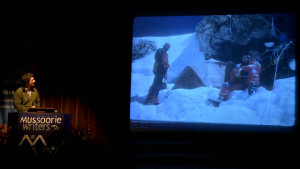 The literary and cultural festival is themed around ‘Women and Mountains’ this year.

The Mussoorie Writers’ Mountain Festival, an annual literary and cultural event celebrating stories of mountains will witness its seventh edition 22-25 October this year at Woodstock School.

The festival runs in collaboration with the Hanifl Centre for Outdoor and Environmental Study at Woodstock School.

According to the just-released program, the seventh edition will have an eclectic mix of explorers, climbers, artists and activists as speakers, musical and comedy performances, photo exhibits, a photo essay contest and the Mussoorie Half Marathon.

Talking about the festival, author and founding director Stephen Alter told The Outdoor Journal, “The Mussoorie Writers Mountain Festival began as a purely literary festival but over the past seven years it has redefined itself as an annual event that celebrates our Himalayan location and heritage, as well as the many different kinds of stories associated with mountains. In essence, the idea is to bring distinguished writers, mountaineers, conservationists, artists and filmmakers to Mussoorie so they can share their experiences and perspectives on mountain adventure, culture and traditions.”

This year’s festival puts a spotlight on women and mountains, particularly on women’s perspectives on the Himalayas.

Stephen says the connection between women and mountains is revealed in many different forms, from climbers like Gerlinde Kaltenbrunner, who takes up the challenge of climbing the highest peaks in the world to activists like Mukti Datta, who want to elevate Himalayan women to the levels of independence and empowerment they deserve.

Keeping in mind the theme, festival-goers will also witness a significant exhibit of Nanda Devi Raj Jat Yatra, a once-in-12-year Himalayan pilgrimage across Uttarakhand. Anthropologist William Sax, who wrote a detailed account of the yatra (he attended it in 1987) for his thesis is one of the speakers at the event, and will release the Hindi version of his book on the subject called Mountain Goddess.

Apart from that there are photo exhibits and a re-enactment of the yatra.

The complete list of speakers can be found here.

The festival program can be found here.