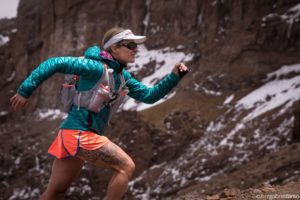 As elite athletes take advantage of new research and technologies that allow them to train smarter and perform at unthinkable levels, it sometimes seems like the gap between top performers is getting smaller, with speed records and the like only being improved upon by minutes or seconds.

But then someone like Brazilian ultrarunner Fernanda Maciel comes along and blows that preconception away. On September 25, Maciel, 37, established a new female speed record on Tanzania’s Mount Kilimanjaro, the tallest mountain in Africa at 5,895 meters. She completed the 43 kilometer trip from Umbwe Gate to the top to Mweka Gate in 10 hours and six minutes, shaving two hours and 52 minutes off the previous record, held by German runner Anne-Marie Flammersfeld. (Kilian Jornet set the overall speed record on Kilimanjaro, at seven hours and  14 minutes, in 2013.)

Go have an adventure! Climb Kilimanjaro yourself on this trip at The Outdoor Voyage!

The run was the fifth installment in Maciel’s “White Flow” project, an open-ended series of challenges and objectives that she completes around the globe to benefit worthy causes.  Maciel says the name speaks using the flow state runners experience as a vehicle for spreading peace: “Sometimes, when you run, you get a very good flow: you’re not suffering any more, you don’t feel your legs, you’re not thinking too much. You just run. So the flow that I find in running, I think lots of people can relate to that. The project is about helping society.” One way Maciel raises funds for the organizations she chooses to support is by selling White Flow necklaces.

She decided to run Kilimanjaro after setting the female speed record on Aconcagua in January 2016. “That was the hardest project I’d done,” she says. She completed the round trip up and down the 6,989-meter-high peak in 22 hours and 52 minutes. “I felt so bad on Aconcagua. I got altitude sickness, there was bad weather. But it showed me how my body reacted at altitude, so I knew I could do Kilimanjaro.”

For the philanthropic part of the Kilimanjaro run, Maciel supported the Kilimanjaro Orphanage Centre, which more than 70 children call home. She raised funds for the Orphanage, brought them supplies, and spent time with the children and staff. “Sharing my passion for running with them was beautiful,” she says.

She spent three days on the flanks of the mountain acclimatizing and training. The landscape was like nothing she’d ever seen. She says,“You start in a huge forest with lots of monkeys around. Then you go through some reeds. Then you get into the mountain part. You go through a valley at 5,000 meters. Then towards the top, there are glaciers and volcanic terrain. It’s a very interesting mix, the ice and the dark sand.”

She had a fright at the 5,000 meter-high valley on an acclimatization run only two days before her record attempt. “I was inside the valley, and a huge rockfall came in my direction,” Maciel says. “One block was the size of a fridge. I barely had time to cover my head and move behind a big boulder. It was very scary.”

But the record-setting run itself went off near perfectly. She left Umbwe Gate, which sits 1,600 meters above sea level, at 5:00 am.  She felt good up until 5,000 meters, when she developed a headache—“I felt my heart beating in my head,” she says—but pushed through the pain. She reached the summit around noon, seven hours and eight minutes after leaving Umbwe Gate.

Maciel says, “I was so happy to be on the summit that the headache went away. I just wanted to keep running. It felt amazing. I slowed my breathing, relaxed, let it sink in. Crazy emotions, seeing everything from the top. All the clouds below me.”

After a short break, she hurtled downhill on the soft sand, feeling herself get stronger with each breath. She felt the kind of flow for which she named White Flow: “I didn’t want to stop. It was a crazy feeling to the end,” she says. Two hours and 58 minutes later, around 3:00 pm, Maciel finished at Mweka Gate.

Her new speed record on Kilimanjaro is just the most recent achievement in an already illustrious running career. In addition to dozens of top five finishes in trail races around the world and her speed record in Aconcagua, in 2012, as her first White Flow challenge, Maciel ran the 860-kilometer-long Camino de Santiago de Compostela to raise funds for Spanish and Brazilian organizations that help children with cancer, finishing it in just 10 days.

But finishing first in races and setting fastest known times are just icing on the cake for Maciel. “Record are just numbers,” she says. “I want to go to a place, challenge myself, learn more about the people and give something back.”

Go have an adventure! Climb Kilimanjaro yourself on this trip at The Outdoor Voyage!