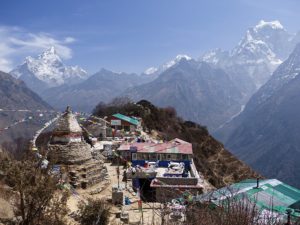 Himalayan Database Soon to be Available Online for Free

Miss Elizabeth Hawley started recording information about ascents in the Himalayas in 1963.

Today her records are the most complete history of Himalayan climbing that exist, and starting in November, they will be available online completely free for the first time.

Ever wonder how many Polish climbers have summited Everest? Or how many expeditions were on Manaslu in 1988? Or the youngest climber to reach the top of Cho Oyu? Or any other of the countless obscure factoids and possible ways to construe information about climbing in the high peaks of Nepal and Tibet?

Starting in November, for the first time, anyone so inclined to look up such information will be able to do so with just a few clicks. The Himalayan Database—the most complete record there is of climbing in the Himalayas, with information on over 69,000 climbers’ attempts on nearly 460 peaks—will soon be available online, completely free of charge.

The Database’s current form dates back to 2004, but the archives out of which it grew were started by Miss Elizabeth Hawley, in 1963. Miss Hawley was on assignment for Reuters covering the first sanctioned American expedition to Everest, on which Tom Hornbein and Willi Unsoeld made the first ascent of the West Ridge via the Hornbein Couloir.

Over the ensuing decades, Miss Hawley became the de facto authority on Himalayan ascents, collecting as much information as she could about the various expeditions that came to Nepal each year. Billi Bierling, Miss Hawley’s assistant, says that back in those early days Hawley would simply “trump to the airport, look at the mountaineering boots of one of the four international flights that came into Kathmandu each week, and ask what mountain they were going to climb.”

In 2004, after a decade of feeding all the existing data into a computer (regarding how long it took, Bierling jokes, “Miss Hawley’s handwriting is appalling”), Hawley and Bierling released the Himalayan Database in CD-ROM form. They had 1,000 copies made, each available for $69.

Now that CDs are a bygone technology, they decided it was time to have the archives available online. And since they never made any money on the CD-ROMs anyway—“The money we made by selling the Database was the same amount we spent on producing it,”—why not have it available for free?

When the Database goes live online in the beginning of November, armchair mountaineers, motivated first or repeat ascentionists, and climbers looking to break arcane records alike will all have a much easier time finding the information they seek. Bierling proudly explains how exhaustive the database is: “Every expedition has to be debriefed by the Ministry of Tourism [in Nepal], so some people ask why we do it separately. But we’re much more precise. We get pictures of new routes, find out where camps were placed, how dangerous it was. What you can download is very detailed.”

To this day, the small team at the Himalayan Database follows Miss Hawley’s example from way back when and interview as many climbers as possible in Kathmandu before or after their expeditions. With the explosion of popularity in Himalayan climbing and its increasing accessibility to non-professional alpinists in recent years, the amount of work required to do those interviews has risen significantly. So Bierling wants to ensure that would-be climbers know about the Database and reach out: “I still want to do the interviews personally, but there are so many now that we also have online forms where people can register. It’s pretty cool. The more people who help us, the more complete our records will be.”

Want to see the mountains that people climb to get their names in the Himalayan Database? Visit The Outdoor Voyage today and join a trek to Annapurna Base Camp!