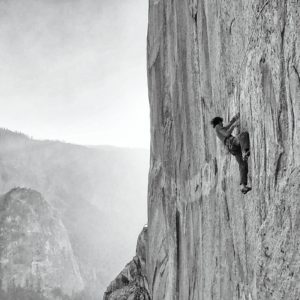 In under eight days, Adam Ondra climbed all of the 32 pitches, pulling off the second and fastest free-ascent of the Dawn Wall.

On November 21, 2016, Adam Ondra pulled off the second free-ascent of the Dawn Wall. A 23-year-old world champion climber from the Czech Republic, he climbed all of the 32 pitches in under eight days.

Widely considered to be the longest, hardest free climb in the world, it was first climbed by Tommy Caldwell and Kevin Jorgeson in January 2015. The VI 5.14d insane route on the popular 3000-foot granite monolith, El Capitan, received widespread international media attention last year. Tommy and Kevin established the route during a gruelling 19-day push. However, they worked on it for close to seven years.

This was Ondra’s first time in Yosemite Valley, California, as well as his first time big-wall climbing. One of the strongest and arguably best climbers out there, Ondra rapidly learned the ropes and managed a one-day ascent of the iconic Nose with his father.

On November 14, Ondra, along with Czech climber Pavel Blažek, started at 1:30am and powered through the first nine pitches. Ondra led every pitch over the next eight days, unlike Caldwell and Jorgeson, who shared leads. On his fifth day, he climbed the route’s crux and on his sixth day, he nailed the route’s last difficult pitches. On day eight, he topped out, achieving an epic goal, claiming the second and fastest ascent of the Dawn Wall- the hardest big-wall free climb in the world.